Franz Jägerstätter vs. Joan of Arc

Another day, another tough matchup. Today it's Franz Jägerstätter (double umlaut!) vs Joan of Arc. One, a little-known (until today)  conscientious objector and opponent of the Nazis; the other, a well-known if often misunderstood saint from France.

Yesterday, Martin Luther overwhelmed the upstart David Oakerhater, despite a valiant showing, 58% to 42% to advance to the Saintly Sixteen.

The Supreme Executive Committee also released its annual (unless we forget) saintly analysis of the NCAA bracket. Yes, some people apparently pay attention to another bracket-based tournament with "Madness" in the name that takes place this time of year. 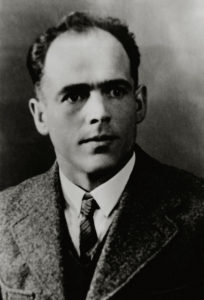 The short life of Franz Jägerstätter (OFS) is an underreported example of quiet faithfulness and unswerving conviction. Jägerstätter was born in Austria in 1907, th illegitimate child of a chambermaid and a farmer. He was raised by his maternal grandmother for much of his early life; his biological father died in World War I. Jägerstätter’s stepfather adopted him and gave Franz his last name.

In 1936, Jägerstätter married Franziska Schwaninger on Maundy Thursday, followed by a pilgrimage-as-honeymoon to Rome—a sign of Jägerstätter’s spiritual awakening and commitment to his faith. While working the family farm to provide for his family, Jägerstätter served as the sacristan for the local parish and received the eucharist daily. He embraced the simple life of Franciscan spirituality, becoming a member of the Third Order of Saint Francis (hence the OFS after his name).

In 1938, Jägerstätter was the only person in his village to cast a vote against the German annexation of Austria. He became increasingly outspoken about his anti-Nazi views, seeking out the advice of his spiritual community leaders about how to respond when he would eventually be conscripted into military service for the Third Reich. Jägerstätter’s spiritual advisors—local priests and the bishop—asked him to consider his wife and three daughters. How would they survive if he were arrested? Perhaps he should swallow his objections and serve in the military. When he was conscripted in 1943, Jägerstätter ignored their sensible, practical advice and declared himself a conscientious objector. He was subsequently jailed by the Nazis.

Jägerstätter spent his time in prison devoted to prayer: “There is practically nothing to do here in the prison, but that does not mean that I have to let my days pass by without putting them to some use. As long as I can pray, and there is plenty of time for that, my life is not in vain.” On August 9, 1943, Jägerstätter was tried for undermining military morale and executed by the Nazis. His conscience was firmly rooted in his faith and life of prayer. This ordinary farmer lived out an extraordinary faith, witnessing to the importance of standing up to evil in our world for Jesus’ sake.

Collect for Franz Jägerstätter
God of all nations, we remember before you our brother Franz, who for love of you and the Jewish peoples of Europe conscientiously objected to being drafted into the Nazi army, was imprisoned and executed: Grant us a measure of this bravery and integrity, that in our own day we may defend the cause of those for whom there is no one else to speak, for the love of Jesus, who with you and the Holy Spirit, reigns now and for ever. Amen. 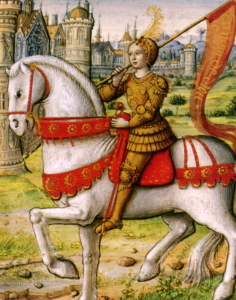 Born in 1412, Joan began receiving visions as a teenager. At just sixteen, she sought out Charles VII, the uncrowned and embattled king of France, saying, “I must be at the king’s side...there will be no help for the kingdom if not from me.” Joan would go on to become a symbol of French independence during the Hundred Years’ War and one of France’s patron saints.

During Joan’s first meeting with Charles VII, she reported that God had commanded her to lead her country’s army to victory. Desperate and near collapse, the royal court saw Joan as a small and singular source of hope. Charles’s advisers worried that Joan was a liability—enemies of the crown could accuse her of witchcraft and label any victories she won as gifts from the devil. So Joan was subjected to a theological and moral examination. Joan was irreproachable, humble, honest, and simple, but her examiners could not attest to the veracity of her visions. They recommended the king send her to Orleans to see if she could lift the five-month siege. Nine days after her arrival, the siege ended. Joan cemented her reputation as a beloved hero of the people and changed the course of the war. In 1430, she was captured by Burgundian forces and sold to the English, who put her on trial for heresy.

Although an illiterate farm girl, Joan’s subtle and clever testimony avoided the rhetorical traps set by her learned inquisitors. Joan was charged with the heresy of dressing like a man. During the trial, she wore a dress, but since Joan was housed in a men’s prison, the dress provided no safety from sexual assault. After fending off an English lord, Joan resumed wearing pants. Her resumption of male military dress was labeled a relapse into heresy. During her 1431 trial, Joan was condemned and sentenced to be burned at the stake despite medieval Catholic doctrine holding that cross-gender dressing was permissible when it afforded a woman safety.

Joan of Arc was killed on May 30, 1431. Her remains were burned repeatedly and her ashes were thrown into the Seine so that no relics could be collected or venerated. At the end of the Hundred Years’ War, a posthumous trial reversed Joan’s conviction. Canonized by Pope Benedict XV in 1920, Joan’s feast is celebrated on May 30.

Collect for Joan of Arc
O God, who raised up the brave Joan to defend her faith and homeland, grant to us the courage to stand for freedom and speak the truth, overcoming the powers of oppression, so that we may rejoice in a perpetual peace. Through Our Lord Jesus Christ. Amen.

Franz Jägerstätter vs. Joan of Arc