Today in Lent Madness it's Thomas à Kempis versus Maria Skobstova, a matchup with plenty of subplots. German vs. Russian. Monk vs. Nun. Middle Ages vs. 20th century. Plenty of inspiration to be plucked from their respective writings and lives.

In yesterday's action Richard Hooker took it to Mary of Egypt 73% to 27%, setting up an intriguing Saintly Sixteen battle between Hooker and Margaret of Scotland.

Oh, and because we try to helpful in all things Lent related, here's a pro-tip: It's time to take the Christmas tree off the front door. 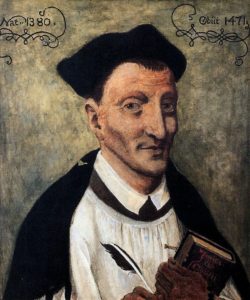 He was born Thomas Hemerkin (or “Little Hammer”), but the town of his birth gave him the name for which he is most widely known. Thomas à Kempis was born in 1380 to a blacksmith and a teacher in Kempen, Germany. Following in the footsteps of his older brother, Thomas joined an order of Augustinians known as the Congregation of Windesheim—a part of the Brethren of Common Life movement located in the Netherlands.

Thomas excelled as a copyist and writer. Over the years, he produced four complete copies of the Bible and numerous other works. From time to time, Thomas was appointed to positions of responsibility in the order. However, he seemed to prefer time in prayer and study—and especially time with his books. His personal motto was: “Everywhere I have sought rest and found it nowhere, save in little nooks with little books.”

When Thomas was appointed subprior, he became responsible for training new members of the community. While doing this work, Thomas produced four booklets as a guide for their spiritual lives. Later, these booklets were collected together under the title The Imitation of Christ.

This guide called the novices to a deep contemplation of the life of Jesus. As they sought to model their lives on Jesus, The Imitation of Christ especially called them to humility, self-denial, and trust in God alone.

The Imitation of Christ became one of the most widely distributed books in Europe. While hard to prove, the claim is that it has been translated into more languages than any book except the Bible. Whether true or not, this points to the wide popularity of Thomas’s writing.

The influence of The Imitation of Christ is wide, from John Wesley (who said it was the best summary of the Christian life he had ever read) to Ignatius of Loyola (who read a chapter of the book every day).

Thomas, who hand-copied the Bible as well as many other books, died in 1471, the same year that The Imitation of Christ became one of the first books published on a printing press. His words continue to live on and inspire, proving the truth of his observation, “A book has but one voice, but it does not instruct everyone alike.”

Collect for Thomas à Kempis
Holy Father, you have nourished and strengthened your Church by the inspired writings of your servant Thomas à Kempis: Grant that we may learn from him to know what is necessary to be known, to love what is to be loved, to praise what highly pleases you, and always to seek to know and follow your will; through Jesus Christ our Lord, who lives and reigns with you and the Holy Spirit, one God, for ever and ever. Amen.

Elizabeth Maria Skobtsova was a Russian Orthodox nun who served in Paris during the Nazi occupation. Born in 1891 in Latvia, then part of the Russian Empire, she was christened Elizaveta Pilenko. Her family was devoutly Orthodox, but when she was fourteen, her father died. She experienced a crisis of faith and embraced atheism. This coincided with her family’s move to St. Petersburg in 1906, where she befriended a group of radical intellectuals. She married in 1910 and had a daughter—but the marriage didn’t last long.

Her love affair with intellectualism fared better. In the prelude to the Russian Revolution, Skobtsova became a popular writer and poet. Slowly, she found herself drawn back into the study of theology—specifically to the idea of Christ as human and one who had suffered as she had. She became the first woman to be admitted to study theology at the Alexander Nevsky Monastery.

After the Revolution, Elizaveta fled Russia and ultimately landed in Paris in 1923. During this period, she remarried and had two more children. Elizaveta also studied theology and worked with the poor. She believed that theology was truest when it directly impacted the poor and suffering. “The liturgy must be translated into life,” she would say.

In 1926, her youngest daughter died, and her marriage broke down. In the aftermath, Elizaveta threw herself into her work with a new vigor, opening a house for Russian refugees in the heart of Paris. In 1932, she took her nun’s vows and changed her name to Maria Skobtsova. Her one condition in taking her vows was that her bishop would never remove her from the world. The house she rented in the center of Paris became a haven for the lost, the homeless, and refugees. She worked tirelessly and convinced a young priest, Fr. Dimitri Klepinin, to be her chaplain.

When the Nazis invaded Paris, Maria’s house also became a haven for Jews in need of faked baptismal certificates, which Maria and Fr. Dimitri provided. They also hid Jews in the house and smuggled several out of Paris altogether. Eventually, the Nazis raided the house and sent Maria, her son, Yuri, and Fr. Dimitri to Ravensbruck Concentration Camp. The three were killed in a gas chamber on Holy Saturday, 1945.

Collect for Maria Skobtsova
Loving God, soften our hearts and fill our minds with the desire to do your will. Kindle in us the longing to comfort those most in need of mercy, that like your servant Maria, we might open wide the doors of our hearts and homes to those in need of refuge and relief, not counting the cost to ourselves, but only the increase of your kingdom, through Jesus your Son, our Redeemer and Advocate. Amen.