Lent Madness continues this morning with an intriguing (aren’t they all?) match-up between Ephrem of Edessa and Thomas Cranmer. Will the “Harp of the Holy Spirit” be played by the author of the first Book of Common Prayer? Only you and the next 24 hours will decide.

In recent action, David Oakerhater bested Martin of Porres by a nose. Or, technically speaking, it was by the hair of a nostril — with over 2,100 votes cast, David won by a mere 15 votes. If you didn’t think your vote counted, you were wrong!

More than 400 of Ephrem’s hymns still exist. His style can be traced to three traditions; Rabbinic Judaism, Greek science and philosophy, and the Mesopotamian/Persian tradition of mystery symbolism. Jerome wrote of him, “I have read in Greek a volume of his on the Holy Spirit; though it was only a translation, I recognized therein the sublime genius of the man.”

In 363, Ephrem retired to a cave in the hills above Edessa. Living on a sparse diet of bread, dried herbs, and water, he wrote and arranged hymns. Some were written to defend orthodoxy against the Gnostics. Ten years later, during a famine, Ephrem distributed food and money to the poor, eventually dying from exhaustion brought on by his ceaseless devotion to help others.

Collect for Ephrem of Edessa: Pour out on us, O Lord, that same Spirit by which your deacon Ephrem rejoiced to proclaim in sacred song the mysteries of faith; and so gladden our hearts that we, like him, may be devoted to you alone; through Jesus Christ our Lord, who lives and reigns with you and the Holy Spirit, one God, now and for ever. Amen. 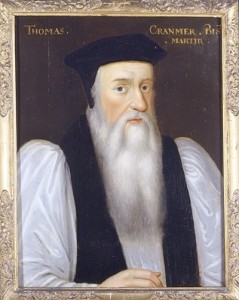 Thomas Cranmer (1489-1556) was Archbishop of Canterbury (1533-1556) and architect of the English Reformation. He was educated at Cambridge and, after ordination, became a diplomat in the service of King Henry VIII. In that role, Cranmer presented the case in favor of annulling Henry’s marriage to his first wife, Catherine of Aragon, to universities on the Continent. Henry, therefore, came to trust this priest who had embraced the message of the Reformation that was unfolding across the English Channel.

His appointment as Archbishop of Canterbury, while still out of the country, was quite a surprise. During his diplomatic mission to Nuremberg, he had married the niece of Andreas Osiander, the city’s leading Lutheran theologian, which signaled that he had cast his lot with the Reformers.

Cranmer returned to England, keeping quiet about his marriage, and was consecrated as a bishop in 1533. This happened with official papal cooperation. However, Cranmer quickly annulled Henry’s marriage to Catherine of Aragon so that Henry’s marriage to Anne Boleyn could be recognized. Anne Boleyn’s daughter, Cranmer’s godchild, would become the future Queen Elizabeth (the First).

With encouragement from Cranmer and Thomas Cromwell, Henry’s chief advisor in ecclesiastical affairs, Henry ordered the dissemination of Bibles with English translations to parish churches in 1537. After Henry’s death in 1547, a young boy ascended the throne as Edward VI, and liturgical reforms, such as the use of the language of the people, soon followed.

Those liturgical reforms included the Order of the Holy Communion (1548), which was meant to be inserted into the Latin Mass immediately after the priest’s communion, both to prepare the laity before their communion and to allow them to receive not only the bread but also the wine (i.e., communion in both kinds, which had been previously restricted to the clergy). The Book of Common Prayer (1549) extended the vernacular to the entire liturgy, and its first revision (1552) leaned a bit further into Protestantism.

After Edward’s death in 1553, the daughter of Catherine of Aragon ascended the throne as Queen Mary (the First). She was a devout Roman Catholic and had Cranmer arrested and tried for heresy. Weakened, broken, and sentenced to be burned at the stake, Cranmer recanted his Protestant beliefs. However, from the pulpit of the University Church in Oxford, he dramatically reversed himself and testified to those beliefs on the day of his execution, March 21, 1556.

Collect for Thomas Cranmer: Merciful God, through the work of Thomas Cranmer you renewed the worship of your Church by restoring the language of the people, and through his death you revealed your power in human weakness: Grant that by your grace we may always worship you in spirit and in truth; through Jesus Christ, our only Mediator and Advocate, who lives and reigns with you and the Holy Spirit, one God, for ever and ever. Amen.

82 Comments to "Ephrem of Edessa vs. Thomas Cranmer"

2 Trackbacks to "Ephrem of Edessa vs. Thomas Cranmer"