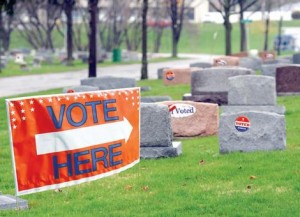 What’s an election without a bit of controversy? The Supreme Executive Committee of the Province of Lent Madness (aka Tim and Scott) has discovered that a few among us have been abusing the system by casting more than a handful of votes. Okay, it was Scott. He of the “I-used-to-work-for-IBM-before-I-became-a-priest” pedigree. Plus, he’s naturally distrustful of humanity.

Rest assured this has not affected the final outcome of any of the match-ups. But it has caused us to consider a loose policy on the issue. Basically, in order to protect the integrity of Lent Madness we’re asking you to vote once. If you can’t restrain your passion and have access to an extra computer or mobile device, we can overlook your enthusiasm. But, unless you’re Bill Gates (saint or devil depending on your perspective), you likely don’t have 17 computers.

I’ll take some responsibility for this phenomenon because at one point I wrote a throw away line (I’m full of these) on our Facebook page that “All’s fair in love and Lent Madness.” Of course I also wrote on the “About Lent Madness” page: “We hope you’ll participate fully this Lent and vote with reckless abandon! (Once — this isn’t Chicago).” To which Diocese of Chicago priest and blogger Cynthia Hallas responded “Actually, Tim, for some of us this is Chicago.” Fair enough.

So what happens if you abuse the system? Several people have had their access to the Lent Madness site revoked. This is obviously not what we want to do. Since this is a season of forgiveness, we have heard the e-mail pleas of those repenting of their actions and promising amendment of life and have reinstated them.

NFL Commissioner Roger Goodell, referring to the NFL logo, speaks often about “protecting the shield.” We are here to “Protect the Halo.” Plus we’re against concussions.

We hope you’re enjoying Lent Madness thus far and we absolutely encourage partisanship. Rather than multiple votes, however, we encourage outlandish campaigning and even mud slinging (“All’s fair,” remember). And perhaps next year we’ll include St. (Hanging) Chad of Lichfield.

38 Comments to "Protecting the Halo!"