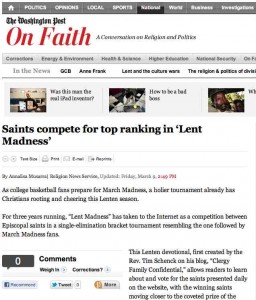 The Supreme Executive Committee of Lent Madness has sometimes been accused of over-hyping things. Clearly these are baseless charges. The Supreme Executive Committee is composed of simple, humble priests trying to form disciples through a saintly smackdown with a global viewing public. But that said, for those who doubt the significance of Lent Madness, the Washington Post (yes, the actual Washington Post) has posted an article about Lent Madness on their website.

As college basketball fans prepare for March Madness, a holier tournament already has Christians rooting and cheering this Lenten season. For three years running, “Lent Madness” has taken to the Internet as a competition between Episcopal saints in a single-elimination bracket tournament resembling the one followed by March Madness fans.

Check it out. Penny Nash, one of our celebrity bloggers gets some airtime too, proving that the Supreme Executive Committee is not only humble, but generous with the limelight.

It's a Religion News Service article, so it might pop up elsewhere. There are a couple of minor factual errors, which we'll work to correct, but we are grateful for the coverage -- not only for Lent Madness and the Episcopal Church, but for a fresh way to engage with the remarkable stories of God's involvement in the lives of women and men through history.

9 comments on “Actual breaking news from an actual newspaper”