Brigid of Kildare vs. Dietrich Bonhoeffer

Yesterday Evelyn Underhill won in a romp over Monnica 71% to 29% setting up an intriguing match-up against Mary Magdalene in the Elate Eight. Be sure to check the updated bracket to see the upcoming "Madness." 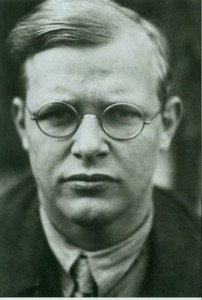 Yes, even the 20th-century martyr Dietrich Bonhoeffer (1906-1945) had a few quirks: He decided to become a theologian as a boy; during his post-doctoral year in New York, he disliked the fact that American students always kept their doors open (i.e., no privacy); he failed his driver’s license test more than once; and his enthusiasm for bullfighting both amused and confused his students.

Quote from a 1939 letter to Reinhold Niebuhr:

"I must live through this difficult period in our national history with the people of Germany. I will have no right to participate in the reconstruction of Christian life in Germany after the war if I do not share the trials of this time with my people."

Quote from Life Together:

"It is not simply to be taken for granted that the Christian has the privilege of living among other Christians. Jesus Christ lived in the midst of his enemies. At the end all his disciples deserted him. On the Cross he was utterly alone, surrounded by evildoers and mockers. For this cause he had come, to bring peace to the enemies of God. So the Christian, too, belongs not in the seclusion of a cloistered life but in the thick of foes. There is his commission, his work."

Quote from The Cost of Discipleship:

"When he was challenged by Jesus to accept a life of voluntary poverty, the rich young man knew he was faced with the simple alternative of obedience or disobedience. When Levi was called from the receipt of custom or Peter from his nets, there was no doubt that Jesus meant business. Both of them were to leave everything and follow. Again, when Peter was called to walk on the rolling sea, he had to get up and risk his life. Only one thing was required in each case -- to rely on Christ’s word, and cling to it as offering greater security than all the securities in the world. The forces which tried to interpose themselves between the word of Jesus and the response of obedience were as formidable then as they are to-day. Reason and conscience, responsibility and piety all stood in the way, and even the law and 'scriptural authority' itself were obstacles which pretended to defend them from going to the extremes of antinomianism and 'enthusiasms.' But the call of Jesus made short work of all these barriers . . ." 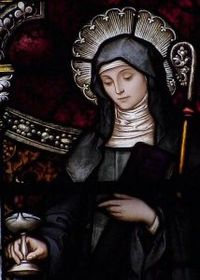 In her lifetime, Brigid, as abbess of the double monastery at Kildare, wielded as much power as any bishop in Ireland. With this in mind, it is interesting to note that the best stories about her come from the domestic side of life and for her concern for the poor. It is said that she could coax cows to give their milk and that she seemed to have an inexhaustible supply of butter for whomever needed it.

Some stories, owing no doubt to the Celtic tradition’s mysterious pliability with the space-time continuum, send Brigid back to be Mary’s midwife and Christ’s wet-nurse. Others have her cleansing lepers and taming wolves. One tells of her coaxing speech from a pair of mute sisters by pouring a mixture of water and her own blood on their necks.

The 8th century Book of Armagh calls Brigid one of “the columns of the Irish” and says, “between St. Patrick and St. Brigid…there was so great a friendship of charity that they had but one heart and one mind. Through him and through her Christ performed many miracles.”

The seventh century Bishop Ultán of Ard Breccáin wrote this hymn in praise of Brigid: “In our island of Hibernia Christ was made known to man by the very great miracles which he performed through the happy virgin of celestial life, famous for her merits through the whole world.”

Finally, and more personally, St. Brigid’s legacy was present at every meal taken at the table in my own family’s household. In a frame on the wall of our dining room hung the table grace attributed to St. Brigid. The grace sums up Brigid’s life as one of deep longing for all to feed on the riches of Christ’s grace, the bread come down from heaven (perhaps with a little butter on it).

I should like a great lake of finest ale
For the King of kings.
I should like a table of the choicest food
For the family of heaven.
Let the ale be made of the fruits of faith,
And the food be forgiving love.

Brigid of Kildare vs. Dietrich Bonhoeffer

78 comments on “Brigid of Kildare vs. Dietrich Bonhoeffer”