Another manic Lent Madness Monday kicks off with a match-up focused on the western United States. Enmegahbowh squares off against David Pendleton Oakerhater in this Battle of Native Pride. Is it unfortunate that these two ended up in the same bracket? Perhaps. But we also know that neither one of them ever backed down in the pursuit of Gospel Truth.

While we never know how these thing will turn out -- that's up to all of you -- the Oakerhater camp did get an early jolt of mojo in an article about Lent Madness that appeared in yesterday's Oklahoma City Oklahoman. And after a first-round teaser,"Celebrity Blogger" Heidi Shott finally gives us the goods on Enmegahbowh's wife.

Make sure to check out the updated bracket and if you need a refresher on Enmegahbowh or David Oakerhater from the previous round, you can go to the bracket page and scroll down to find links to every previous Lent Madness battle (thanks to Bracket Czar Adam Thomas for thinking of this and making it happen). 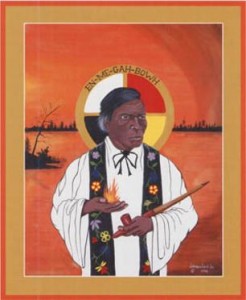 One hundred and ten years may have passed since the death of Enmegahbowh, but the voice of “the one who stands before his people” sounds remarkably contemporary.

At age 25, fed up with missionary work as a Methodist and vowing to return home to Canada, he and his wife Biwabiko-geshig-equay (or Iron Sky Woman or Charlotte, as she was christened on their wedding day), boarded the ship John Jacob Astor bound for Sault Ste. Marie across Lake Superior. The worst storm in many years sent the ship back to shore but not before Enmegahbowh received a visitation from the prophet Jonah. Many years later he recounted the experience to Bishop Whipple of Minnesota,

“Here Mr. Jonah came before me and said, ‘Ah, my friend Enmegahbowh, I know you. You are a fugitive. You have sinned and disobeyed God. Instead of going to the city of Nineveh, where God sent you to spread His word to the people, you started to go, and then turned aside. You are now on your way to the city of Tarshish, congenial to your cowardly soul...My friend your position is precisely like mine... Farewell! Farewell! May the Great Spirit pardon you and bring you to dry land.’ So saying he departed out of my sight. Dear Bishop, I know you will not understand me to say that I saw Jonah with my natural eyesight. Oh, no, I saw him with my imagination.”

Back on the Minnesota side of the lake, he decamped to live with his wife’s people and consider his options. There he met an Episcopal priest, Ezekiel Gear, who gifted him with a Book of Common Prayer. Before long the course of his journey was set toward ministry and service to his people.

But given the wide expanse of his heart, he honored and protected not only his people, but all people. Fast forward 17 years to the mission of St. Columba’s where he served as deacon. In 1862, Indian uprisings surged across the state. Church historian Theodore Holcombe wrote of that period, “Enmegahbowh was a tower of strength to the Indian mission in all its years of trial and danger, and it was through his courage and bravery in warning the white settlers that a terrible massacre [of whites and native people] was averted.”

While this is widely known, it’s less known that Chief Hole-in-the-Day II - Enmegahbowh’s brother by adoption and Iron Sky Woman’s cousin - initiated the collusion between several tribal leaders that would have wiped out the white settlement. Hole-in-the-Day II’s displeasure with Enmegahbowh for thwarting his plans was made manifest when he sent two tribal members to his house to kill him.

According to Holcombe’s 1903 account, the assassins arrived about 9:00 am. Although he had been warned and was expecting them, Enmegahbowh’s conscience did not permit him to handle firearms. However in this instance, “he stretched a point, and loaded his double-barrel gun, and gave it to his wife who was known to be a good shot, and who had asked him to let her take the matter into her own hands.”

Iron Sky Woman threw open the door as they approached and shouted: "I know what you have come for, but the first one who shows a weapon, I will shoot down like a dog."

“They knew her reputation as a woman of spirit, and skill with the gun, and at once abandoned their design, and made her a present. These same Indians confessed they had been sent by Hole-in-the-Day, and acknowledged that Enmegahbowh had not only saved the whites, but also the Indians also from being all destroyed by the government, so there was cause for mutual congratulations."

Bishop Whipple called Enmegahbowh “a man of rare natural intellect and profound common sense,” and described him as “the most faithful of men in the face of faithless times and events.”

Not that Enmegahbowh always deferred to his bishop: Prior to his ordination to the priesthood in 1867, he refused to study Greek or Hebrew stating, “I was sent to work among the living, not among the dead!” Bishop Whipple gave him a pass. 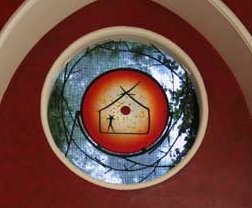 David Pendleton Oakerhater, a Cheyenne warrior, converted to Christianity while a prisoner of the United States government, largely due to the kindness shown to him by one of the officers at Fort Marion in Florida. As a result, he was baptized, confirmed, and became a deacon in the Episcopal Church. He returned to minister among the Cheyenne in Oklahoma for 50 years.

While a prisoner, he drew pen and ink art in ledger books, signing his name Making Medicine (an Anglicized version of his name, more accurately translated Sun Dancer), often with a glyph of a dancer in a Sun Dance lodge. This glyph is now depicted as a stained glass window at St. Paul’s Cathedral in Oklahoma city. The Smithsonian has a collection of Ledger Art from Fort Marion.

When Oakerhater returned to Oklahoma in the company of the Rev. John Bartlett Wicks, he smoothed the way for their ministry there by saying,

“Men, you all know me. You remember me when I led you out to war I went first and what I told you was true. Now I have been away to the East and I have learned about another captain, the Lord Jesus Christ, and he is my leader. He goes first, and all he tells me is true. I come back to my people to tell you to go with me now in this new road, a war that makes all for peace, and where we never have only victory.”

The first Episcopal service was held the following Sunday, with Oakerhater interpreting. Oakerhater also helped translate portions of the Book of Common Prayer into Cheyenne.

In a letter to a patron in 1885, Oakerhater wrote,

“I keep that work God has given to me to do and for that reason though I am an Indian and you of a different people yet your faith is my faith and in all the earth there are many different races of yet to all alike God has given his one Spirit and one life and one faith and one Savior. You have grown up knowing all this and for this reason though I am far from you if God my father shall bless me and help me and keep me, show me to do what is right.”