Evelyn Underhill vs. Nicholas of Myra

In the last battle of the week, influential 2oth-century writer Evelyn Underhill squares off against Nicholas of Myra. You wanted to know how "Santa Claus" would fare in Lent Madness? Well, here's your chance to vote for or against St. Nick.

Regarding, yesterdays smackdown between Catherine of Siena and Emma of Hawaii, all we can say is "wow." With Catherine holding a slight lead throughout much of the day, Queen Emma came storming back to defeat Catherine 60% to 40% in heavy voting (over 2,000 votes cast). As the sun started to wane on the East Coast of the United States and rise over the Pacific Ocean, Emma's numbers slowly started to increase. Once the Episcopal Diocese of Hawaii sent out a plea on Emma's behalf via their e-news, the Queen dowager never looked back, again highlighting the importance of rallying your friends and considering voting blocs to promote your favorite saints. Madness indeed!

We do hope you'll take the necessary precautions this weekend to ward off any lingering effects of LMW (Lent Madness Withdrawal). If you're feeling isolated, lonely, and depressed, you can always check in with our Facebook fan page, where the conversation never stops (and we just topped 1,500 'likes'). If you're on Twitter, you can always find people to chat with by using our hashtag #LentMadness. And if you missed this week's Monday Madness video, Tim and Scott discuss LMW remedies among other timely Lent Madness news. Finally, since Scott seems to fly anywhere at the drop of a biretta, I'm sure he'd be happy to make a personal pastoral call if you're feeling particularly lost. 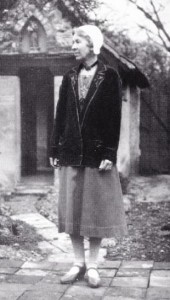 Evelyn Underhill (1875-1941) was a writer, theologian, mystic, spiritual director, and pacifist, who arguably did more than anyone else to illuminate mystical experience and claim it as one not reserved for the spiritual elite. She spoke with some authority, not being among the spiritual elite herself, but a lay woman setting forth what she herself discovered.

Born in 1875 to a prominent barrister and his wife, Underhill was baptized and confirmed in the Church of England but had no formal religious training. She married a childhood friend, Hubert Stuart Moore, a barrister, and lived a typical Edwardian life for a woman of her class, including charitable work and regular trips to the Continent. Less typically, she wrote 39 books and more than 350 articles (both under her maiden name and under the pseudonym, John Cordelier), presented programmes (as they say) on the Spiritual Life on the BBC, and became a prominent spiritual director and retreat leader. She became the first woman to lecture at an Oxford college on theology and the first woman allowed to lecture to Church of England clergy.

Her tea-sipping librarian appearance belied her gifts as a powerhouse of spiritual thought, and as someone who understood both the blessing and the danger of standing in God’s presence. In a letter, she gently suggested to former Golden Halo winner C.S. Lewis that “perhaps…your concept of God would be improved by just a touch of wildness.”

Her works were some of the most widely read resources on spirituality throughout the first half of the 20th Century. Her great work, Mysticism, written in 1911, is still a standard in the field. Some of her other notable works include Practical Mysticism (1914), The Spiritual Life (1936), and Worship (1937).

Collect for Evelyn Underhill: O God, Origin, Sustainer, and End of all your creatures: Grant that your Church, taught by your servant Evelyn Underhill, guarded evermore by your power, and guided by your Spirit into the light of truth, may continually offer to you all glory and thanksgiving, and attain with your saints to the blessed hope of everlasting life, which you have promised us by our Savior Jesus Christ; who with you and the Holy Spirit lives and reigns, one God, now and for ever. Amen. 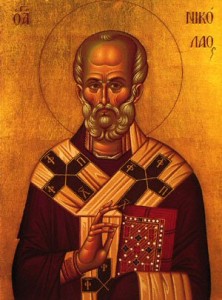 Nicholas has become a marketing legend ever since his image appeared in Coca-Cola ads beginning in 1931. The image of a rotund, bearded man in fur trimmed scarlet clothing also owes a great deal to Clement Moore’s “A Visit From St. Nicholas” (more commonly known as “Twas the Night Before Christmas”). But who was the real man behind the modern Kris Kringle?

Little is known about Nicholas, Bishop of Myra, which is in modern day Turkey. That his heart was full of generosity is not in doubt, making him a fine progenitor for Santa Claus. In the most famous story about Nicholas, the bishop secretly supplied the dowries for the three daughters of a poor man. One version of the story says that he tossed bags of coins into their stockings, which were hanging by the fire to dry. (You can see where that one went.) When the poor man confronted the bishop and thanked him for his generosity, Nicholas gave all the glory to God.

While most of his generous exploits are shrouded in obscurity between legend and fact, we do know for certain that, during the persecution led by Emperor Diocletian, Nicholas was tortured and imprisoned. But he was released when Constantine took the throne and decriminalized Christianity. It is possible that Nicholas was present during the First Ecumenical Council of Nicaea in 325, during which the Nicene Creed was composed. Nicholas was canonized in the sixth century. Legend has it that Italian merchants stole his body in the eleventh century and removed it to Bari, Italy. From there, Nicholas’ fame spread throughout the western Church, indirectly leading to the Santa Claus we know today.

Collect for Nicholas of Myra: Almighty God, who in your love gave to your servant Nicholas of Myra a perpetual name for deeds of kindness on land and sea: Grant, we pray, that your Church may never cease to work for the happiness of children, the safety of sailors, the relief of the poor, and the help of those tossed by tempests of doubt or grief; through Jesus Christ our Lord, who lives and reigns with you and the Holy Spirit, one God, for ever and ever. Amen.

Evelyn Underhill vs. Nicholas of Myra

86 comments on “Evelyn Underhill vs. Nicholas of Myra”