Joan of Arc vs. Mary Magdalene

Well, friends, Welcome to the Round of the Saintly Sixteen. We started with 32 holy men and women and we're down to sixteen as the battle for the coveted Golden Halo marches on. Round One consisted of basic biographical information about the saints. Since there’s no need to rehash previously covered ground, the this round is made up of what we like to call "Quirks & Quotes." So prepare for some little known facts accompanied by quotes either by or about the saint in question.

In the final battle of the initial round, Paul of Tarsus handily defeated Theodore of Tarsus 61% to 39%. Check out the updated bracket to see the full slate of saints who made it to the next round.

We kick things off with the much-anticipated match-up between Joan of Arc and Mary Magdalene. This battle has been hyped so much that it would make even Don King blush. But the waiting is over; let the voting commence. Winner heads to the Round of the Elate Eight! 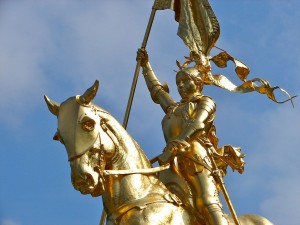 Joan of Arc (1412 - 1431), a French peasant, began to hear the voices of Saints Michael, Catherine, and Margaret at age thirteen. By seventeen, those voices urged her to become involved in the struggle for the contested French throne in the Hundred Years War. She convinced Charles the Dauphin to allow her to command an army, which she led to spectacular victory in Orleans, paving the way for him to be crowned king. She was later wounded in battle and then captured, sold to the English, and put on trial by the Inquisition. Tried as a witch and a heretic but finally convicted of cross-dressing, she was burned at the stake at nineteen.

Joan was led by her voices to find a sword buried behind the altar in a church in Tours. It had five crosses on it and was covered with easily removed rust. “I loved that sword,” she testified, “because it was found in the church of St. Catherine [of Fierbois], whom I loved.”  She only actually used the sword, however, to whack the backs of trollops while running them out of the army camps; during battles, it resided in one of its three special sheaths, while her hands were busy with her horse and her banner. “I loved my banner forty times better than my sword. And when I went against the enemy, I carried my banner myself, lest I kill any.  I have never killed anyone,” she said.

Joan inspired hundreds of books, plays, musical compositions, movies, and all kinds of art. Mark Twain, not normally known for his religious sentiments, declared that his biography of her was his best book and said of her: “Whatever thing men call great, look for it in Joan of Arc, and there you will find it.” Sir Arthur Conan Doyle declared that “...next to the Christ, the highest spiritual being of whom we have any exact record on this earth is the girl Jeanne.” “She chose a path, and went down it like a thunderbolt,” said an admiring G.K. Chesterton.

Joan’s own voice comes through loud and clear in the trial transcript. When asked in what dialect her “voices” spoke to her, she replied, “In one better than yours.” Do you believe in God? she was asked. “Yes, better than you.” 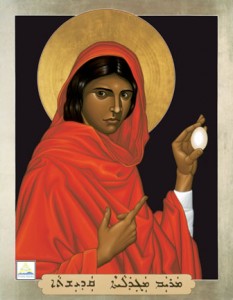 While we have no direct quotes from Mary Magdalene, we do have quite a few extraordinary stories about this beloved Apostle to the Apostles. As Jane Schaberg notes, “No other biblical figure—including Judas and perhaps even Jesus—has had such a vivid and bizarre post-biblical life in the human imagination, in legend, and in art.”

Best known, probably because it has been depicted for centuries, is the story explaining why Mary Magdalene is often shown in Western and Eastern artwork holding a red egg.

According to this legend, Mary Magdalene’s story about Jesus’ resurrection was challenged by the Roman emperor Tiberius. When he insisted that no one could rise from the dead any more than an egg could turn red, she picked an egg up from the table; it turned red. Today, Eastern Rite Christians honor the story by coloring Easter eggs bright red.

Other less known (perhaps suppressed?) legends have her traveling with John (the other beloved) after Mary, the mother of Jesus, died circa 54 CE. These legends not only have Mary and John on a road trip to Ephesus, visiting newly established churches along the way, but also have them living together for a while.

Such sacred cohabitation is extrapolated from the story about a thief named Cleophus breaking into their home at night while Mary and John were sleeping. John told Cleophus (“vision of glory”)  to turn from doing evil and converted him to the faith. This story was widely shared among those in the first century church as another example of describing the second coming of Christ as a “thief in the night.”

Before deciding the prize for most incredible legend should go to the red egg story, consider these phantasmagorical ones about a cave in France and the Holy Grail.

Legends have Mary Magdalene traveling to Gaul after leaving Asia Minor. Once there, she is believed to have spent a period of time teaching and preaching in Marseilles. To recuperate from that gig, she turned to a more contemplative life of prayer and meditation in a cave in the Sainte-Baume mountains. But according to these legends, a band of angels transported her daily so she and Jesus could spend time together. Holy hoist!

Last but not least are stories about the Holy Grail, the cup from which Jesus drank during the Last Supper . . . or was it the cup held up at the foot of the Cross by Joseph of Arimathea to catch blood streaming from the wounds of our dying Lord? Both?

There’s some dispute about whether Joseph or Mary Magdalene held the cup at the foot of the Cross, but legend-weavers seem to agree that Mary brought the “sangraal”  to the Southern coast of France circa 42 C.E.

Here’s what’s not legend or myth: the Risen Christ first appeared to Mary Magdalene and entrusted her with the task of telling the disciples she had seen the Lord.

Joan of Arc vs. Mary Magdalene

92 comments on “Joan of Arc vs. Mary Magdalene”