Margaret of Scotland vs. William Temple

It's been said that "every rose has its thorn." In yesterday's Lent Madness action we learned that Rose of Lima's thorn is Brigid of Kildare who defeated her in the most lopsided battle to date, 82% to 18%. Ouch.

After today’s match-up, we only have one more battle left before the start of the Round of the Saintly Sixteen. Check out the updated bracket and the calendar of upcoming battles and then vote! 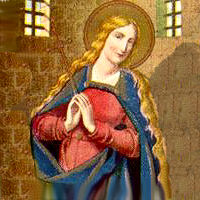 Margaret of Scotland (1045-1093) was born Margaret Atheling in Hungary and ended up in England with her family as part of a succession plan devised by King Edward. During the tumult following his death, Margaret and her family fled England and landed in Scotland where they found shelter in the court of King Malcolm.

Eventually Margaret set aside her plans to become a nun and married Malcolm. She had eight children and her descendants ruled Scotland for 200 years. During her reign, Scotland  became a center of Christian culture.

Known for her piety and fidelity to the Roman Catholic Church, she was instrumental in rooting out corruption in the moribund Scottish Church and rebuilding monasteries at Iona and Dumferline (destroyed by Reformers in the 16th century). While hagiographers tend focus on her commitment to crafting church vestments and ornaments, Margaret was even more renowned in her day for charity and kindness to the poor, especially children and the elderly.

Collect for Margaret of Scotland: O God, you called your servant Margaret to an earthly throne that she might advance your heavenly kingdom, and gave her zeal for your Church and love for your people: Mercifully grant that we who commemorate her this day may be fruitful in good works, and attain to the glorious crown of your saints; through Jesus Christ our Lord, who lives and reigns with you and the Holy Spirit, one God, for ever and ever. Amen. 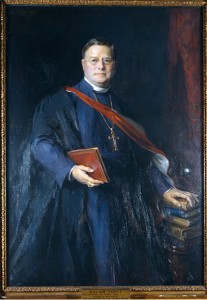 William Temple (1881-1944) was a member of the clergy in the Church of England, who became Bishop of Manchester (1921-1929), Archbishop of York (1929-1942), and Archbishop of Canterbury (1942-1944). His father, Frederick Temple, was also ordained and served as Bishop of Exeter (1869-1885), Bishop of London (1885-1896), and Archbishop of Canterbury (1896-1902). So William, who never knew his father in an official role other than as a bishop, was raised not only in the heart of the Church of England but also in the heart of the British Empire. Perhaps that inspired him to think that Anglican Christianity might be able to build with others a transcendent version of the British Empire, possessing the ability to transform both his own nation and the world. The best example of that firm conviction can be seen in his support of efforts to establish what would become, after his death, the World Council of Churches.

He excelled in his studies at Oxford, where he also lectured until his ordination, and used his noted intellect in his clerical vocation to help the Church of England look beyond its own walls to the needs of society. That passion for social justice, which he expressed in both word and deed, was grounded in his belief in the truth of the Incarnation (i.e., the doctrine that God, in Jesus Christ, “became flesh, and lived among us”). It led Temple to view as sacred every individual and, indeed, all of life.

Before his appointment as a bishop, Temple resigned a comfortable living as the Rector of St. James’s Church, Piccadilly, in London in order to become a leader in the “Life and Liberty” movement. That popular effort to reform the governance of the Church of England successfully added the voice of the laity in a more democratic structure.

Temple became Archbishop of Canterbury during World War II and died on October 26, 1944, after only two and a half years in that role. He did not live to see the end of those hostilities or the results of some of the seeds that he planted, but his hope for the future was nicely summarized in the title of his last book, published in the year of his death: The Church Looks Forward.

Collect for William Temple: O God of light and love, who illumined your Church through the witness of your servant William Temple: Inspire us, we pray, by his teaching and example, that we may rejoice with courage, confidence, and faith in the Word made flesh, and may be led to establish that city which has justice for its foundation and love for its law; through Jesus Christ, the light of the world, who lives and reigns with you and the Holy Spirit, one God, for ever and ever. Amen.

Margaret of Scotland vs. William Temple

124 comments on “Margaret of Scotland vs. William Temple”