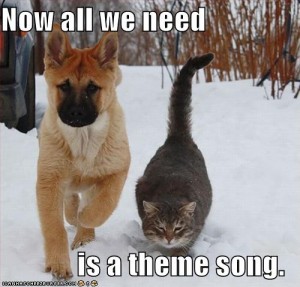 Here at Lent Madness we've been putting out the call for a theme song. Why? Because every hot product / business / organization / character/TV show has one -- like McDonalds ("I'm lovin' it") or Cheers ("Where everybody knows your name") or Brylcream ("A little dab'll do ya").

We thought about following the trend of today's advertisers and using an already-recorded song like U2's "The Saints are Coming" but decided not to risk getting sued by Bono. Plus he's probably sick of Episcopalians using his music anyway. Watch Tim on a 2006 segment of ABCs Nightline about the "U2charist." Then watch him getting mocked for it on Comedy Central's The Daily Show.

So we're looking for original lyrics/tunes and a few of you have submitted them. Or if not original tunes, at least ones where the copyright is in the public domain.

Here's one from Lent Madness early adopter, haiku-meister, and  Diocese of Southeast Florida Communications Director Mary Cox. Obviously it's sung to the tune of "For All the Saints."

For all the saints, who in Lent Madness clash,
were we to wager, we’d need lots of cash,
so here we’re merely cyber-talking trash.
Alleluia, etc….

The Golden Halo glimmers in the sun,
awaiting that most holy saint who’s won—
who says that Lent should not be any fun!
Alleluia, etc….

Here's another one set to an old tune -- "When the Saints Go Marching In." This was penned by Mary Wise, a wise practitioner of Lent Madness and a parishioner at St. Clare of Assisi in Ann Arbor, Michigan.

Oh Tim and Scott
Oh Tim and Scott
Have given up being rivals for Lent
They'll be talking 'bout those saintly matchups
That Golden Halo's heaven-sent
Philander Chase
Enmegahbowh
Detrich Benhoeffer, Martin of Porres
They'll be up against better known saints
but they may just come out the best!

Here are some excellent examples of what happens when a talented composer ends up being bitten by the Lent Madness bug (virus?). The mysterious "Decomposer" has sent us several options for theme songs, along with some commentary. Actually, we're petitioning to have them included in the next hymnal revision.

It’s time now for Lent Madness
The Saints have gathered ‘round.
No time for sloth or sadness --
A victor must be crowned.
The Golden Halo’s glowing
Awaiting its new head;
With growing voting showing
That faith is far from dead.

2. Peppier tune, barely appropriate to Lent at all really...except the third verse of the actual hymn (text: L. Laurentii and tr: S.B. Findlater) would bring a lovely last Word to the LM wrap party...’cause it ain’t, ultimately, all about the saints! : )

It’s time for Lenten Madness,
So let your votes appear!
The favourites are advancing --
(Though some results are queer.) (The ones we hold most dear.) ...
The Golden Halo’s waiting;
The polls wide open stand.
So pray, and read, and wrestle
And vote as best you can.

v. 3 unadulterated:
The saints, who here in patience
Their cross and suff’rings bore,
Shall live and reign forever
When sorrow is no more.
Around the throne of glory
The Lamb they shall behold;
In triumph cast before him
Their diadems of gold.

3. Another entry to the tune of "For All the Saints"

For all the Saints you cannot vote – just one!
Each day a battle
‘Til the best Saint’s won
And claims the Gol-den Halo. Join us it is fun!
It’s time for Lent Madness!
(Please: no alleluias)

Vote for your Saint each day, and we will see
Which of the Saints
Goes on to vic-tor-y.
And claims the Gol-den Halo and the great glory.
It’s time for Lent Madness!
(Don’t sing “alleluia”!)

Okay, this next one is not really a theme song but kudos to Linda Gills Beshears (from, I think, Baton Rouge, Louisiana?) for writing a clever poem thing that must have taken a long time to do!

Lent is a time for us to reflect on all the things we may have regret.

Eager for Lent to start as we read and gather information to get Saint smarts.

Never though I’d ever see the number of people tweeting and E-Mailing me.

Time is almost near Mona is biting her nails and waiting to hear,if the Saint she voted on came out fighting or is on the run in fear.

Martin de Porres should have won he lost by 15 votes son of a gun!

Ashes not yet faded away, and people could not wait to play,

Hey guys witch Saints will be facing off today.

Did you see Rev. Scott Gunn and Rev Tim Schenck showing off a new Lent Madness large Coffee Cup. I want one that is what’s up.

Now the games has begun I wont stop until my saint has won!

Even though I see thousands of people challenging me,read about each Saints, the truth will set you free!

Saints are on the run, playing this game is so much fun!

So-oo Rev. Scott and Rev. Tim what well we do when it ends.Do we really have to wait for Lent to begin again?

As long as we've left the theme songs behind, here are a few Lent Madness haikus from Peggy Sanchez. Peggy's somewhat of a ringer since she works at Forward Movement. I wouldn't be surprised if they didn't put out an entire tract of Lent Madness haikus.

Voting between saints?
Are they not all equally
Worthy of our praise?

Mary Magdalene
Gets my vote any old day
Who is this John Huss?

Keep up the great creative energy, folks. We love it! And, remember, if you submit it, we just might make you famous! Or at least we'll turn you into a Lent Madness celebrity which looks fantastic on a resume. As long as you only apply for positions at organizations like Forward Movement or parishes like St. John the Evangelist in Hingham, Massachusetts.