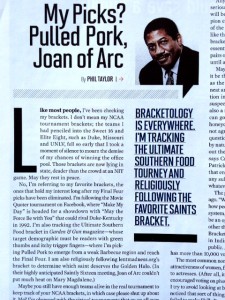 A couple of days ago, the Supreme Executive Committee received a flash news alert from one of our intrepid Lent Madness Field Agents. Doug Allen of Lincoln, RI was the first one to report that Lent Madness is mentioned in this week’s Sports Illustrated. Phil Taylor, in his last-page column, covers a range of brackets beyond the tired college basketball tourney. Under the headline “My Picks? Pulled Pork, Joan Of Arc,” Taylor writes, “I am also religiously following lentmadness.org’s bracket to determine which saint deserves the Golden Halo. (In their highly anticipated Saintly Sixteen meeting, Joan of Arc couldn’t put much heat on Mary Magdalene.)”

We couldn’t be happier, even before we learned (in a tweet from @SI_PhilTaylor to @scottagunn) that Taylor is the son of an Episcopal priest, now deceased. No doubt Taylor’s father has heavenly box seats in the saintly smackdown as the action heats up heading into the Golden Halo championship.

The mainstream madness might get most of the TV coverage, but at least the grand dame of sports magazines has begun to cover the best athletic contest since Jacob wrestled. We can only hope that the infamous swimsuit issue will be redeemed by a Golden Halo profile issue next spring. And we do not wish to see any of the saints in swimwear.

Another venerable magazine failed to serve its readers well by neglecting Lent Madness. The Atlantic Monthly has a “battle of the brackets” going on right now, and they left out the best battle of them all! We encourage our readers to go leave comments (in prose or poetry) on their site to remind them that they should cover Lent Madness.

Last but not least in this week’s media round-up, the Rev. Elizabeth Wheatley Dyson of the Diocese of Massachusetts has written about Lent Madness in the Wicked Local. Nicely done.

If you want major, global fame, get Lent Madness into your local, national, or global media source. We’ll give you a shout out on the website and possibly even in the crown jewel of global media sensations, Monday Madness.

6 Comments to "Sports Illustrated Gets Religion"