The Round of the Saintly Sixteen continues with a match-up between two heavyweights from the British Isles. Thomas Cranmer and Columba -- the "Killer C's" -- face off against one another for a trip to the Elate Eight. Only one will advance to the next round in this the fourth of eight battles comprising the current round while the other will be left to "gather up the crumbs under thy table."

Yesterday, in a battle that ostensibly took place on the vast plains in the middle of the United States, but really happened on your respective electronic devices, Enmegahbowh knocked out David Pendleton Oakerhater 54% to 46%. He joins Mary Magdalene and Jerome among those who have earned a spot in the Elate Eight. Check the updated bracket to see the big picture of Lent Madness (metaphorically speaking -- there's not actually a mural depicting Scott and Tim). 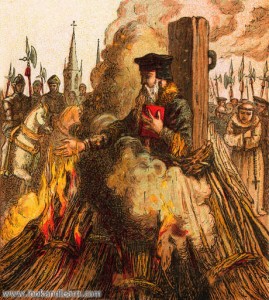 Thomas Cranmer (1489-1556), architect of the English Reformation, was eventually arrested and tried for heresy. Weakened, broken, and sentenced to be burned at the stake, Cranmer recanted his Protestant beliefs. However, from the pulpit of the University Church in Oxford, he dramatically reversed himself and testified to those beliefs on the day of his execution, March 21, 1556.

Before Cranmer’s last sermon, there was a different sermon by Henry Cole. It was Cole’s unenviable task to explain to the crowd why someone arrested for heresy, who subsequently repented, should still be burned at the stake. Diarmaid MacCullouch’s award-winning biography of Cranmer describes this as “a problem in canon law which Cole had little choice but to acknowledge openly.”

The awkwardness was resolved when Cranmer recanted his earlier recantations. After the fire that would take his life was lit, Cranmer stretched out his right hand into it. This fulfilled a promise that he had made in the church: “forasmuch as my hand offended, writing contrary to my heart, my hand shall first be punished there-for.” At the stake, he repeated the last words of the first martyr, Stephen: “Lord Jesus, receive my spirit . . . I see the heavens open and Jesus standing at the right hand of God.”

Almighty and most merciful Father, we have erred and strayed from thy ways, like lost sheep. We have followed too much the devices and desires of our own hearts. We have offended against thy holy laws. We have left undone those things which we ought to have done, and we have done those things which we ought not to have done, and there is no health in us: but thou, O Lord, have mercy upon us miserable offenders. Spare thou them, O God, which confess their faults. Restore thou them that be penitent, according to thy promises declared unto mankind in Christ Jesus our Lord. And grant, O most merciful Father, for his sake, that we may hereafter live a godly, righteous, and sober life, to the glory of thy holy Name. Amen. 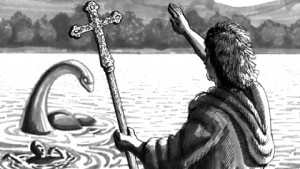 Dear Columba (521-597) may be adored by Christians for founding monasteries in Derry and Durrow in Ireland – and, of course, in iconic Iona in Scotland - but he is also beloved by those of another faith tradition for his little known work in the Scottish highlands.

In 563 Columba traveled to Iona with 12 companions to set up home base for the conversion of the native Picts and Scots. During his 32 years there, serving as abbot and preaching the Christian faith to the locals (including baptizing the kings of both the Picts and Scots), he traveled widely, making a famous trip to Loch Ness.

Legend says Columba came across a group of Picts burying one of their friends. The saint was told the man had been killed by none other than the Loch Ness monster.

Soon after, another Pict decided to brave those very waters and, in Columba’s presence, became endangered when the monster made yet another eerie appearance. Columba, staff in hand, hastily made the sign of the cross as he commanded the monster, “Thou shalt go no further, nor touch the man; go back with all speed.” At this point, the monster fled, terrified - leaving the assembled Picts amazed. In fact, all who gathered there immediately glorified Columba’s God.

This account, according to many of the Nessie faithful is regarded as the very first appearance in history of the famed monster. The sightings, of course, would continue to be recorded through the ages by such unbiased observers as local hotel and restaurant owners and other members of the Loch Ness Chamber of Commerce.

84 comments on “Thomas Cranmer vs. Columba”