To follow up on the earlier post from today, here are excerpts from devotional sketches for the two saints who are duking it out on Tuesday, Emma of Hawaii and Dietrich Bonhoeffer. These are excerpts from Calendar of Saints: Lent Madness 2012 Edition, published by Forward Movement. 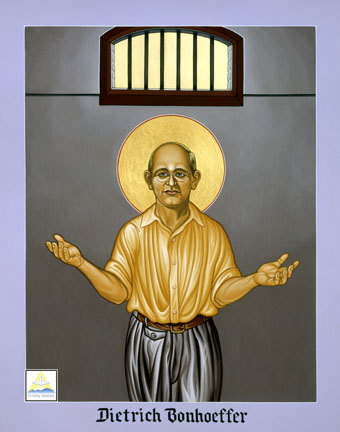 As the Nazi ring closed in upon him and the Confessing Church he had an opportunity for asylum in the United States, which he declined. He was arrested and jailed in 1943, and from his cell in Berlin he helped plan an assassination of Adolf Hitler. The assassination failed and Bonhoeffer’s involvement was discovered, and he was sent to Buchenwald concentration camp. But his life was spared, for reasons we do not know, and he was transferred to Schoenberg Prison. There he served as chaplain to fellow inmates until on a Sunday in 1945, immediately following divine services, he was summoned by the guards and taken by automobile to Flossenburg Prison, where he was summarily hanged. That was on April 9. Bonhoeffer was thirty-nine years old. The crumbling German Reich formally surrendered twenty-eight days later.

May we, like Dietrich Bonhoeffer, count the cost of discipleship to be worthy of our whole selves. Amen. 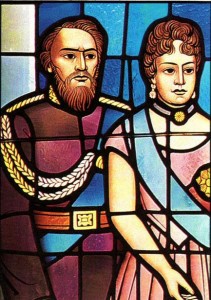 The Hawaiian Islands were first evangelized by sternly Calvinistic Congregationalists and by Roman Catholics. Neither group had much respect for the other or for the native Hawaiian culture and traditions. King Kamehameha IV, who was crowned in 1854, and his wife, Queen Emma, actively sought a branch of Christianity that was all-embracing, reconciliatory, and accepting of Hawaiian culture, yet orthodox and traditional. They found such in Anglicanism. Queen Victoria served as godmother to their son. Under royal patronage Thomas N. Staley became Hawaii’s first bishop, ground was broken for St. Andrew’s Cathedral in Honolulu, The Book of Common Prayer was translated into Hawaiian, the Queen’s Hospital was founded, and several schools were established in the islands with Anglican clergy as tutors. Kamehameha was only twenty-nine when he died. Queen Emma lived on for many years and became a symbol of dignity and Christian piety to the people of Hawaii. The Archbishop of Canterbury described her as one of the most saintly souls he had ever met.

We thank you for the witness of Kamehameha and Emma and for their work to build up your church. Amen.

By the way, for only seven bucks you can get your own copy of Calendar of Saints: Lent Madness 2012 Edition. It’s available as an ebook only for Kindle and Nook.

4 comments on “Devo with the Faithful Four, Part II”