This is a guest post by the Rev. Josh Hale, pastor of Perritte Memorial United Methodist Church in Nacogdoches, Texas. You might know Josh from Twitter, where he is @expatminister.

With the Elate Eight narrowed down now to the Faithful Four, let’s pause a moment and reflect on all of the kitsch which helped catapult (or hobble) these saints toward the Golden Halo. Clearly we can see that tacky souvenirs are not just a modern, capitalist byproduct of religion, but something which has been around for centuries—even millennia!

So just how did we come by these knickknacks…and evaluate them as “tawdry”?

My first year of ministry was spent amongst the Methodists of rural northeastern England, and they had established vibrant and enriching ecumenical partnerships with the Anglicans in their area. One of my colleagues’ villages was West Halton (North Lincolnshire) and its parish church dedicated to Saint Etheldreda, of whom I had never heard before. 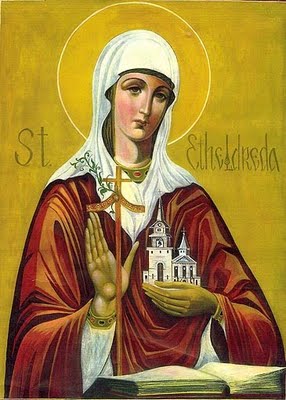 Now Etheldreda (or Æthelthryth) was an East Anglian princess. As a Christian young lady, she took a vow of perpetual virginity, which caused a fair bit of strain as she kept getting married off to build political alliances. As I heard the story, Etheldreda was married to Egfrid, the King of Northumbria at the height of its power. He wanted children, she clearly did not…so she hoofed it. She made it across the boundary of the Humber River to freedom, and the spot where she prayed in celebration is where the West Halton parish church is now located.

Great, you’re saying, but what does this have to do with those St. Margaret tote bags from last week? We’re getting there! After our friend Etheldreda celebrates her escape with two female companions, she goes further south to Ely (which was a gift from her first husband) and founded an abbey there, which later becomes the diocesan cathedral. She finally dies in 679 after a life of exemplary piety and impressive administrative gifts.

But here’s what you need to know–another, more common, form of her name was Audrey. Pilgrims visiting her remains in Cambridgeshire, and later those who patronized the fair held in her name in Ely, often purchased local goods to remember her by, especially lacy clothing. These came over time to be considered low-quality or outdated goods, and among 17th century Puritans (who disdained frills and lace) they began to be sneered at by a corruption of her name: tawdry.

So the next time you’re visiting the megachurch coffee shop or a cathedral bookstore, think about St. Etheldreda’s life of faith…and how she too is likely facepalming at the tawdry stuff Christians are willing to buy.