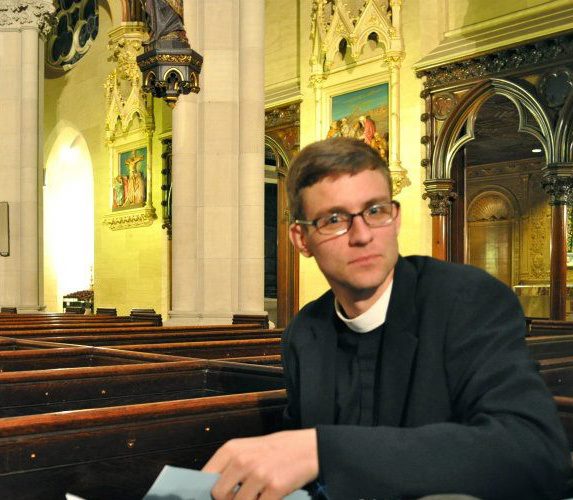 Celebrity Blogger Week continues with our third and final Lent Madness newbie. We've enjoyed hazing David the past few months and look forward to surprising him with the official Lent Madness ankle tattoo.

The Rev. David Sibley, while living in Brooklyn, does not craft artisanal cheeses. Instead, he serves as Priest-in-Charge of Saint John’s Church, Fort Hamilton, where six of the saints featured in this year’s bracket stare back at him every time he celebrates the Eucharist. Raised right in the middle of South Carolina, David studied and did research as a chemist before being whisked away to seminary in New York City. When he’s not in church, David enjoys travel, hiking and camping, all things food and music related, and praying for the yearly resurrection of the Chicago Cubs’ World Series hopes. When the ideas are forthcoming, he’s been known to blog at Feeding on Manna, and holds forth much more often with his partners in crime on Twitter at @davidsibley.

What possessed you to answer the (high) calling to participate in Lent Madness as a Celebrity Blogger?

Sheer intimidation. There's nothing quite as persuasive as middle of the night knock on your door in which a Lent Madness "purple ops" crack-commando unit delivers a summons to bloggerdom from the Supreme Executive Committee. In reality, I've been a faithful Lent Madness fan for years, dating back to its pre-Forward Movement days, when Scott ran a shrewd and shameless campaign to navigate George Herbert to the Inaugural Golden Halo. To be asked to participate is a joy.

I love how Lent Madness reminds us that the Lenten season is a gift -- a time to recommit to the essentials of our lives in Christ in the company of the church -- and not a chore. Lent Madness gives me the opportunity to engage in a Lenten discipline where I get to learn new things, and enjoy the fun of a light-hearted competition, and even better company. And what better company could we ask for in our Lenten journey than the saints?

What are you most looking forward to about Lent Madness 2013? 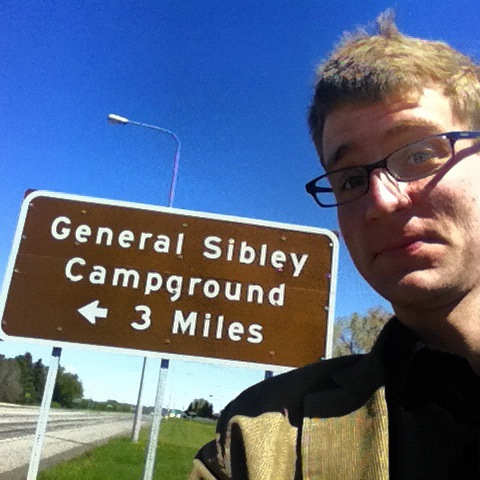 I'm looking forward to getting to know a few saints better than I knew them before. One of my favorite authors, the Jesuit priest James Martin, notes in his book My Life with the Saints that "It's funny -- the way you discover a new saint is often similar to the way in which you meet a new friend. Maybe you hear an admiring comment about someone and think, I'd like to get to know that person… perhaps you're introduced to a person by someone else who knows you'll enjoy that person's company, or perhaps you run across someone, totally by accident, during your day-to-day life." The saints have been great companions in my spiritual life, and I'm looking forward to making a few more friends.

I'm also looking forward to see what dark-horse candidates will emerge on the strength of good grass-roots campaigns this year. I think many of us were quite surprised by the upstart campaign that Philander Chase made through last year's competition. Are we going to see a relative unknown make a no-holds barred run for the Golden Halo? The only way to find out is, as they say, to "stay tuned…"<

What should the the Lent Madness faithful know about you? (quirks, interests, hobbies, etc.)
While in most things I'm the epitome of a church nerd, I do manage to have a few other interests…

Before I was ordained, I did undergraduate and graduate studies in chemistry, and still can't quite understand why everyone seems to have hated that subject during high school and college. In many ways, I still consider myself a scientist at heart. Like most of the Episcopal Church, I managed to get hooked on watching Downton Abbey; I also remain a huge fan of Mad Men, Arrested Development, and The West Wing. I'm a huge sports fan -- my passion for college football (South Carolina Gamecocks) and professional baseball (Chicago Cubs) could be charitably described as "addictions." With fellow Celebrity Blogger Laurie Brock, I experience a bit of a twinge in my gut when Scott and Tim refer to "the other SEC" when referring to my college football conference of choice. I'm also pretty sure that being a Cubs fan makes me a better Christian, because you have to believe in resurrection when your team hasn't won a World Series since 1908. So don't be surprised if a few sports references make their way into any hagiographies I write.