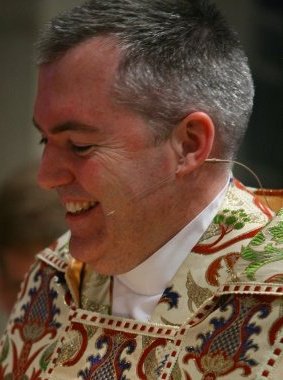 Celebrity Blogger Week continues with our penultimate CB, Neil Alan Willard. Besides being the only Celebrity Blogger with four (count ’em!) “L”s in his name, Neil is related to most of the clergy in the Episcopal Church. Also, we like to use the word “penultimate” whenever the opportunity arises.

The Rev. Neil Alan Willard, one of the original Celebrity Bloggers and an early adopter of Lent Madness, is Rector of St. Stephen’s Episcopal Church in Edina, Minnesota, a first-ring suburb of Minneapolis. His study there overlooks beautiful Minnehaha Creek on its way to the Mississippi River. He’s married to Carrie, also beautiful, and they have two sons and a Labrador Retriever in the household. Outside the house are chipmunks, raccoons, and coyotes. No kidding. Last bit of trivia: his father-in-law and his sister-in-law’s husband are both Episcopal priests at different congregations in Aiken, South Carolina, and his brother-in-law is also an Episcopal priest, previously in Wasilla, Alaska, and now in Kapolei, Hawaii. No kidding. Follow him on Twitter @neilwillard and be sure to check out his blog Laughing Water.

How long have you been a Celebrity Blogger? What do you like about doing this or what have you learned along the way?
As someone who was raised on “Tobacco Road” and attended Wake Forest University, I know a little about ACC basketball and religious devotion to a favorite team. I’m not only a Demon Deacon but also the Rector of a church named for St. Stephen, and a member of the Martyrs, our men’s group. I really got into the first tournament of Lent Madness as soon as I realized that our patron saint, the first martyr and one of the first deacons, needed a boost in the second round. While that was a tough loss for us, we had made a strong, last-minute effort. So the next year I gladly accepted an invitation to become one of the original Celebrity Bloggers. I took C.S. Lewis all the way to the Golden Halo in 2011 and Dietrich Bonhoeffer to the Faithful Four in 2012. I’m proud of that record (but not too proud, of course, since that would be unsaintly). What I’ve learned is that birds of a feather do indeed flock together. Last October, for example, I had the opportunity to meet Garrison Keillor backstage at the Fitzgerald Theater in St. Paul after a live radio broadcast of A Prairie Home Companion. It may take a moment for you to connect the dots, but it seems obvious to me that this gathering of celebrities in the Land of Lake Wobegon was a direct result of the blessings of Lent Madness. 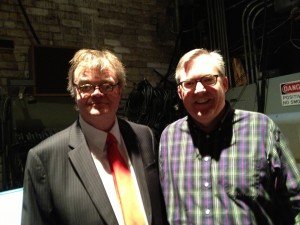 What should the Lent Madness faithful know about you?
My congregation is located in Edina, which is the childhood home of Ric Flair (a.k.a. “The Nature Boy”). Fake-sports-oriented Episcopalians will surely remember him as the most stylish “pro wrestler” of the 70s and 80s. My family, however, lives in neighboring St. Louis Park, hometown of the Coen Brothers, Senator Al Franken, and Nordic Ware, which produced the original Bundt Pan in 1950. So when members of the House of Bishops choose the Nordic Ware Cathedral Bundt Pan as a gift for their clergy, they are indirectly helping to ensure that snow-covered streets are plowed between my house and my church throughout Minnesota’s harsh winters. I would tweet my thanks to them, but the mitred ones tend to react to that sort of thing like Mr. Carson did when he first saw an electric toaster at Downton Abbey: “Is it not enough that we are sheltering a dangerous revolutionary, Mrs. Hughes? Could you not have spared me that?” *sigh*