After yesterday's heart-pounding, back and forth battle between upstart Lucy and favorite John the Baptist, you might have welcomed a weekend off to regroup. Unfortunately (or fortunately depending on your perspective), today is the one and only Saturday match-up in Lent Madness. If your name is Ignatius or if you've ever fantasized about naming your first-born son after one of these revered gentlemen, you won't want to miss this epic, long-anticipated Battle of the Iggys.

In the end Lucy defeated John the Baptist by the slimmest of margins in a bruising, bracket-busting battle. In addition to a record number of votes cast (5,200), we also saw a record number of comments (240) as passions were running high on both sides. Such is the "madness" of Lent Madness!

We even had our first mini-controversy that didn't involve a mug. Please know that when it comes to voter irregularities, the Supreme Executive Committee, like Big Brother, is watching. We had to zap 35 votes from John the Baptist last night after we noticed multiple votes from several ISP addresses. Again, please, one vote per person. If you have more than one family member voting -- that's fine. We're big fans of universal suffrage. If you're, say, a teacher logging multiple votes on behalf of your students -- just let us know. But voter fraud makes the saints weep so don't risk being cast into the outer darkness of life without Lent Madness (it's a miserable place that would make even the most hideous medieval gargoyle blush).

In the meantime, back to the task at hand. The great challenge of this battle? Voting for the correct Ignatius!

Ignatius of Antioch (1st century CE) was Bishop of Antioch, located in modern Turkey, near its border with Syria. He is most known for the seven letters he wrote during his journey to martyrdom at Rome. These letters are among the earliest pieces of Christian theology outside of the New Testament, and give Ignatius a place among the “Apostolic Fathers” – those leaders of the church who served as the “bridge” between the Jesus and apostles themselves, and the rest of the early church.

We actually know very little about Ignatius outside of his journey to martyrdom. One pious legend holds that he was among the children blessed by Jesus and taken into his arms. It is certain, however, that around AD 68, Ignatius was chosen to serve as Bishop of Antioch, a see originally held by St. Peter himself. Sources disagree as to whether Ignatius was Antioch’s second or third bishop.

During the rule of the Emperor Trajan, Ignatius was condemned to death for being a Christian. He was led under a guard of ten soldiers to his martyrdom at Rome. It was during this journey that Ignatius wrote his letters. He was received en route to Rome at Smyrna, and there wrote letters encouraging the churches in Ephesus, Magnesia, and Tralles, and, most poignantly, a letter to the church in Rome commanding them not to intervene with authorities in order to prevent his martyrdom. He went from Smyrna to Troas, and there wrote letters to churches in Philadelphia and Smyrna, and to Polycarp, Bishop of Smyrna.

Ignatius letters’ portray a man devoted to Christ and Christ’s church. He tirelessly defended the humanity, divinity, and resurrection of Jesus Christ. Ignatius is an especially tireless advocate for the unity of the church through the community’s participation in the Eucharist – which he saw to be the continuing life of Jesus Christ in the church -- “breaking one bread, which is the medicine of immortality, the antidote we take in order not to die but to live forever in Jesus Christ.” Ignatius’ theology of episcopal ministry – most especially his tireless advocacy for the Bishop to serve as a locus of unity for the church – lies at the foundation of our understanding of episcopacy in our church today, where bishops are charged at their ordination to be guardians of the faith and unity of the church.

Ignatius’ letter to the Romans expressed his firm desire to be led to his martyrdom, begging the church in Rome to let him be “food for the wild beasts… God’s wheat… ground by the teeth of wild beasts, so that I may prove to be pure bread” (Rom 4:1).  Around AD 115, Ignatius was granted his wish, as he was martyred in the coliseum, given over to the teeth of lions. Contemporary iconography of St. Ignatius of Antioch represents him as a bearded man, vested in bishop’s regalia, attacked by two lions, one making for his head, the other for his feet.

Collect for Ignatius of Antioch
Almighty God, we praise your Name for your bishop and martyr Ignatius of Antioch, who offered himself as grain to be ground by the teeth of wild beasts that he might present to you the pure bread of sacrifice. Accept, we pray, the willing tribute of our lives and give us a share in the pure and spotless offering of your Son Jesus Christ; who lives and reigns with you and the Holy Spirit, one God, for ever and ever. Amen. 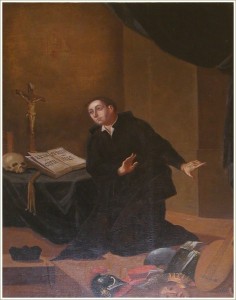 Born in 1491 to a noble Basque family, Ignatius of Loyola was an exact contemporary of Archbishop Thomas Cranmer. (TC was two years older but they both died in 1556.)

As a mover and shaker in the Counter-Reformation and the founder of the Society of Jesus, a.k.a. the Jesuits, Ignatius lived during a period of great change in the Christian Church. His written legacy Spiritual Exercises, a set of meditations, prayers, and practices designed to help discern the presence of Jesus and the will of God in one’s life, continues to be valued by Christians to the present day.

He described himself as a young man as a vainglorious soldier. Badly wounded at the Battle of Pamplona in 1521, Ignatius was kindly carried by the French on a litter to his family’s castle of Loyola. There, after having his leg re-broken, (with a stub sawn off - ouch!), re-set, and stretched by weights, he had some extended time for reading to take his mind from the pain. The chivalrous romances he requested were unavailable so he read deeply of the life of Christ, particularly De Vita Christi, and the lives of saints. After months of recuperation and reflection, his conversion from a soldier of the realm to a knight of Christ was profound and adamant.

Ignatius resolved to live a life of poverty and self-denial and committed himself to doing heroic deeds and winning converts in the Holy Land.  First he made his confession at the sanctuary of Monserrat where, after giving away his fine clothes to the poor and donning sackcloth, he suspended his sword and dagger on the altar. Then, after spending months in a cave in prayer and mastering the ascetic life, he journeyed to Jerusalem where his pilgrimage quickly turned to deep disappointment. After being received by the Franciscans for a few weeks, he was told he must return to Spain. The pope (one of those who, by the way, didn’t resign) had given the Franciscans the authority to send pilgrims home because of the hot trade in kidnapping visiting Christians and holding them for ransom was too costly.

In Spain -- with a heart full of earnest desire to serve God -- Ignatius turned to study, eventually spending many years studying and preaching in Paris. His fervor drew the attention of various inquisitors during that period, and he was their special guest on several brief occasions. In 1534 he gathered six particular friends who shared his vision, and they founded the Society of Jesus with Ignatius as its first Superior General. They were ordained in Rome in 1537, and the order was recognized by the Vatican three years later. Ultimately the Society of Jesus, with its motto -- ad maiorem Dei gloriam --  for the greater glory of God, sent missionaries around the world and founded many schools, universities, and seminaries. Ignatius and the many Jesuits were prime players in Counter-Reformation efforts across Europe, including England where they nettled the nascent Anglicans.

Ignatius died of Roman fever, or malaria, in a simple cell in Rome in 1556. He was canonized by Pope Gregory XV, who also didn’t resign, in 1622.

Collect for Ignatius of Loyola
Almighty God, from whom all good things come: You called Ignatius of Loyola to the service of your Divine Majesty and to find you in all things. Inspired by his example and strengthened by his companionship, may we labor without counting the cost and seek no reward other than knowing that we do your will; through Jesus Christ our Savior, who lives and reigns with you and the Holy Spirit, now and for ever. Amen.