Lucy vs. John the Baptist

"Ash Week" continues with an intriguing match up between two martyrs, Lucy and John the Baptist. It's a tough choice but please don't lose your head over the decision. The winner will get ahead and make it to the Round of the Saintly Sixteen. The loser will be metaphorically re-martyred. See, Lent Madness is easy: we present all of our choices to you on a silver platter.

In the very first match up of Lent Madness 2013, Jonathan Daniels soundly defeated Macrina the Younger to advance to the next round. We're pleased to report that voting was very heavy with over 4,500 votes cast. And if you're new to Lent Madness, make sure to check out the comment stream throughout the day and perhaps even leave one of your own. It's fascinating and informative to hear why people are voting a certain way and many share their own personal experiences with a particular saint. In other words, you're now part of a true online community of people seeking inspiration during Lent from an amazing and diverse group of spiritual heroes.

Can't get enough of Lent Madness? You're in luck because tomorrow is the one and only day in Lent that we'll have a weekend vote. The anticipated Battle of the Iggys -- Ignatius of Antioch vs. Ignatius of Loyola -- will take place on Saturday. In the meantime, keep spreading the word about Lent Madness! Share links with your friends of all denominations, like us on Facebook, follow us on Twitter, or walk around your neighborhood with a homemade Lent Madness sandwich board. 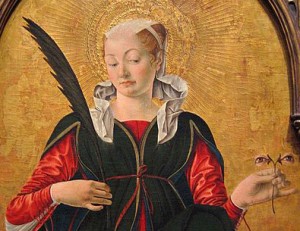 Not much is actually known about St. Lucy (Santa Lucia in Italian) other than that she was born into a wealthy family in Syracuse (Italy) in the late Third Century and was martyred while still a young woman in the Diocletian persecution in 303.

Tradition has it, however, that Lucy, like many young women of her day, wished to remain a virgin rather than marry the pagan to whom her parents betrothed her. After Lucy's prayers of intercession healed her mother of a debilitating illness, her mother granted Lucy's fervent wish to remain unmarried and instead distribute her dowry to the poor in Syracuse. The erstwhile fiancé, however, was not a fan of this distribution plan and in his rage at her rejection of him denounced Lucy to the Roman Governor as a Christian. She was first taken to a brothel so that she might be forced to surrender her virginity, but the guards who came for her found her too heavy to move even when hitched to a team of oxen, so filled was she with the Holy Spirit. Still, she was imprisoned, tortured, and finally killed when she did not renounce her dedication to Christ and affirm allegiance to the Emperor.

Sometimes Lucy is depicted as holding a platter with a pair of eyes upon it. The story goes that Lucy’s eyes were either plucked out by her torturers or plucked out by Lucy herself in repudiation of her fiancé, who found Lucy’s eyes appealing. Some versions of the story have God restoring her sight with even more beautiful eyes. At any rate, she is the patron saint of the blind and those with eye diseases.

Her name means "light" and her feast day is celebrated by families in Northern Europe by dressing the eldest daughter in a white robe and placing a wreath with lighted candles on her head. Sometimes a village’s “Lucy” carries bread and coffee to all the homes in the village as a re-enactment of Lucy’s kindness to the poor in the distribution of her dowry. Her feast day is a day of special devotion in her native Italy, as well, where the emphasis is on food, particularly hot chocolate with grains of wheat (to represent her eyes) in it.

Lucy was a much venerated, very popular saint in the early Church, and her name is included, along with only six other women, in both the Roman and Ambrosian Canons of the Mass.

Collect for Lucy
Saint Lucy, your beautiful name signifies light. By the light of faith which God bestowed upon you, increase and preserve this light in my soul so that I may avoid evil, be zealous in the performance of good works, and abhor nothing so much as the blindness and the darkness of evil and of sin. By your intercession with God, obtain for me perfect vision for my bodily eyes and the grace to use them for God's greater honor and glory and the salvation of all men. Saint Lucy, virgin and martyr, hear my prayers and obtain my petitions. Amen. 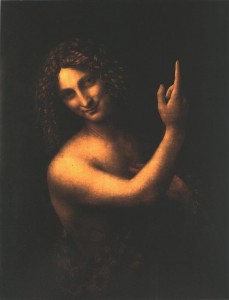 He’s one of the reasons more Episcopal Churches are named St. John than any other name.

John the Baptist (not to be confused with John the disciple or John the Divine, author of Revelation – yes, like today there were lots of Johns back then…) was the son of a priest in the Temple – Zachary. His mother was Elizabeth, who was related to Mary, Jesus’ mother.  Thus, John the Baptist was related to Jesus, perhaps his cousin. Many people believe John the Baptist was born in Ain-Karim, which is southwest of Jerusalem. This followed an apparition in which the angel Gabriel told Zachary and his wife that they would have a child, even though Elizabeth was past child-bearing years.

Many scholars believe John lived in the desert, perhaps as a hermit. He may have been affiliated with a group known as the Essenes, whose communal life was chronicled in the Dead Sea Scrolls. This pietistic, separatist group had removed itself from the evils of the big city, Jerusalem, in order to practice the Jewish faith with greater purity in a desolate, desert environment. We find expressions of this in John’s later preaching of repentance.

John’s public ministry started when he was around 30-years-old. The Gospels tell us that John preached a harsh message, calling his hearers a ‘brood of vipers’ and imploring them to repent and start anew. John also understood his role to pave the way for Jesus, declaring he was not worthy to untie the sandals from the Messiah’s feet. John would go on to baptize Jesus in the River Jordan. During this event a dove came down from heaven and the voice of God was heard announcing that Jesus was God’s son.

Following his ministry of baptism, John remained critical of those who did not fear God. He was eventually imprisoned by Herod for correctly accusing the leader of taking his brother’s wife. During his incarceration, John began to have doubts, at one point sending some of his followers to Jesus to confirm he was really the Messiah.

John was needlessly executed after a young dancer named Salome so impressed Herod with her performance that he promised her anything – and, at the urging of her mother, she chose John the Baptist’s head to be served on a platter.

John inspired many of his followers to trust Christ when he designated Him "the Lamb of God." Some of those followers were Andrew and John, who came to know Christ through John's preaching. John is described in the New Testament as the last of the Old Testament prophets and the precursor of the Messiah. His feast day is June 24th and the feast for his death is August 29th.

Collect for John the Baptist
Almighty God, by whose providence your servant John the Baptist was wonderfully born, and sent to prepare the way of your Son our Savior by preaching repentance: Make us so to follow his teaching and holy life, that we may truly repent according to his preaching; and, following his example, constantly speak the truth, boldly rebuke vice, and patiently suffer for the truth's sake; through Jesus Christ your Son our Lord, who lives and reigns with you and the Holy Spirit, one God, for ever and ever. Amen.

UDPATE: The Supreme Executive Committee has found several instances of voting irregularity in this poll. At this point, three addresses have been cast into the outer darkness of Lent Madness. We have adjusted the vote totals by removing 35 votes for John the Baptist. Remember: in Lent Madness, we encourage you to mobilize your friends to vote. But we frown mightily on those who vote more than once.

Lucy vs. John the Baptist