We finish up the first full week of Lent Madness with a match-up between a 17th-century priest and poet and a young, early 4th-century martyr. John Donne made it into the official bracket by defeating T.S. Eliot in the final play-in round known as the Great Poetry Slam. By winning that battle, Donne proclaimed to the world that he would not be, in the parlance of March Madness, "one and Donne."

Oh, and the other intrigue yesterday was whether we'd be able to make it to 1,000 followers on Twitter. As of this very moment @LentMadness stands at 989 followers (or, as we prefer to call them, "disciples"). Big (undetermined!) prize for our 1,000th follow. 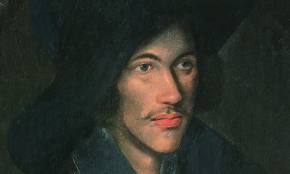 Or maybe great preachers are great because they lived a life of passion, complexity, and redemption. John Donne certainly did. He was born to a Roman Catholic family, but struggled with his faith in his early life before converting to Anglicanism. He attended several institutions of higher learning without attaining a degree, womanized ladies in courts all over Europe, lived off the wealth of patrons, and wrote poetry. He was spiritual but not religious...and wrote poetry. His poetry was ground-breaking literature of the day with its images and ideas that connected seemingly unrelated things together like a parasite and sex (The Flea).

Donne eventually began a promising political career. His  intelligence and charm opened doors, and he sat in Elizabeth’s last Parliament. Until he followed his heart and married Ann More -- a marriage that was opposed by all parties except the woman and man to be married. They married. Donne got sacked and landed in prison...along with the priest who married them. He was eventually released from prison, and he and Ann, by all accounts, lived happily married until her death.

Donne’s legacy of poetry; of life lived fully and recklessly, with forgiveness and redemption; a life lived in the freedom of human passion and the obedience of devotion to the Gospel; and a life of questioning faith are all great legacies. Perhaps, though, in his own writing, his legacy of community is his greatest. Donne recognized that there is no belonging to a faith community without truly belonging. We are all connected in God one to another. As he writes, “All that she [the Church] does belongs to all.... Any man’s death diminishes me, because I am involved in mankind.” 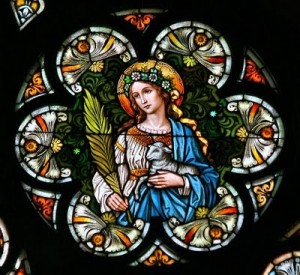 A few days after Agnes' death, a girl named Emerentiana was found praying by her tomb. This girl claimed to be the daughter of Agnes' wet nurse, thus her foster sister. Emerentiana refused to leave the place, and reprimanded the pagans for killing Agnes. She was stoned to death and later canonized.