Welcome to the fourth and final Play-In match of Lent Madness 2013. In the previous Play-Ins, Gregory the Great defeated Gregory of Nyssa; Thomas Tallis beat John Merbecke; and Samuel Seabury sent George Berkeley to the showers.

Today we have the Great Poetry Slam between John Donne and T.S. Eliot with the winner heading to the official bracket to face Agnes of Rome in the First Round. The loser will, presumably, sit in solitude and write self-loathing verses of poetry.

Don’t forget Lent Madness 2013 officially kicks off on “Ash Thursday,” February 14th, with a First Round match-up between Jonathan Daniels and Macrina the Younger. If you’re looking to organize Lent Madness at your parish, click here for tips on how to do so. If you’d like to know when your favorite saint is set to do battle make sure to check out the Calendar of Match-Ups. And, finally, don’t forget to “like” us on Facebook and follow us on Twitter. See you in Lent! 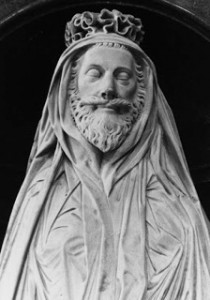 10. Was the first Anglican hipster. He attended both Oxford and Cambridge and the Lincoln Inn (where lawyers trained in Elizabethan England), and managed not to get any academic degrees. He traveled to Europe, especially Spain, and partied and wrote poetry.  He womanized, danced with ladies in courts all over Europe, lived off the wealth of patrons, and wrote poetry. He became spiritual but not religious…and wrote poetry. His poetry was ground-breaking to literature of the day with its twisted and distorted images and ideas that connected seemingly unrelated things together like a flea and sex. Without Donne, T.S. Eliot would have had no foundation to begin writing his poetry.

9. He eventually fell backwards into a real job by landing a gig as the private secretary to one of the highest officials in the queen’s court. His intelligence and charm opened doors, and he even scored a seat in Elizabeth’s last Parliament. Then he ruined it all for love. Yes, ladies, swoon-like-a-Jane-Austen-novel love. He secretly married Ann More, and her father and John’s employer totally opposed the match (I mean, Donne wasn’t exactly Mr. Elizabethan England Bachelor of the Year). Yet they married. Donne got sacked and landed in prison…along with the priest who married them (for LOVE – remember this!). He was eventually released from prison, and he and Ann had twelve children and were by all accounts happily married until her death.

7. And he wrote poems that spoke to the complexities of human nature and faith…that we read in English classes and hear in church sermons to this day. He gave English language the phrase, “No man is an island,”  Hemingway is eternally grateful for Donne’s, “For whom the bell tolls” line, and “Death be not proud,” with its in-your-face elegance, gives fullness to the lines of the Burial Rite: “And even at the grave, we make our song. Alleluia, Alleluia, Alleluia!”

6. He was a satirist, which means he was really snarky, but had huge audiences. In his satirical essays, he called out corrupt government and church practices, absurdities in certain faith beliefs (he was one of the early people to argue suicide was not a mortal sin), bad poets, and pompous courtiers. He blasted those who blindly followed established religious tradition without carefully examining one’s beliefs and questioning. He writes (translated into modern English), “You won’t be saved on the Day of Judgement by saying Harry or Martin told  you to believe this. God wants to know what YOU thought and believed.”

5. King James wanted him to become a priest so badly that he declared to all of England that Donne could not be hired except in the church. Seriously. So he was ordained in 1615 and soon became known as a great preacher in an age of great preachers, in an era of the Anglican church when preaching was a form of spiritual devotion, an intellectual exercise, and dramatic entertainment. I bet no one looked at his iPhone to check the time when Donne was throwing down the Gospel at St. Paul’s Cross.

4. He was eventually named Dean of St. Paul’s, the big time of the big time. He preached his own funeral sermon right before he died. Funeral. Preaching. Owned.

3. Just in case anyone had any ideas about how he should be remembered, he arranged a final portrait of himself not in pompous glory, but in his burial shroud.  Yes, a bit creepy, but he walked the walk and saw the beauty in death. Because guess what? Donne believed with every bit of his soul that the Resurrection wasn’t just a story, but it was Truth. His statue survived the 1666 fire at St. Paul’s and still watches over the place. Just in case any subsequent Deans think they are all that.

Death, be not proud, though some have called thee
Mighty and dreadful, for thou art not so;
For those whom thou think’st thou dost overthrow
Die not, poor Death, nor yet canst thou kill me.
From rest and sleep, which but thy pictures be,
Much pleasure; then from thee much more must flow,
And soonest our best men with thee do go,
Rest of their bones, and soul’s delivery.
Thou art slave to fate, chance, kings, and desperate men,
And dost with poison, war, and sickness dwell,
And poppy or charms can make us sleep well
And better than thy stroke; why swell’s thou then?
One short sleep past, we wake eternally
And death shall be no more; Death, thou shalt die.

Mark but this flea, and mark in this,
How little that which thou deniest me is;
Me it sucked first, and now sucks thee,
And in this fela our two bloods mingled be;
Thou know’st that this cannot be said
A sin, or shame, or loss of maidenhead,
Yet this enjoys before it woo,
And pampered swells with one blood made of two,
And this, alas, is more than we would do.

Oh stay, three lives in one flea spare,
Where we almost, nay more than married are.
This flea is you and I, and this
Our marriage bed and marriage temple is;
Though parents grudge, and you, we are met,
And cloistered in these living walls of jet.
Though use make you apt to kill me
Let not to that, self-murder added be,
And sacrilege, three sins in killing three.

Cruel and sudden, hast thou since
Purpled thy nail in blood of innocence?
Wherein could this flea guilty be,
Except in that drop which is sucked from thee?
Yet thou triumph’st, and say’st that thou
Find’st not thy self nor me the weaker now;
‘Tis true; then learn how false fears be:
Just so much honor, when thou yield’st to me,
Will waste, as this flea’s death took life from thee.

John Donne was the first Rev. Dirty Sexy Ministry, and Dean of St. Paul’s. And he lived it loud and proud.

10. T.S. Eliot (9/26/1888 – 1/4/1965) was a poet, playwright, literary critic, and editor. Like many of his generation, he was profoundly affected by World War I but he also became a convert to Anglicanism, to the surprise of literary friends and colleagues, resulting in his writing poetry and plays featuring distinctly Christian ideas set alongside themes of desolation and disconnection. He sought to explore traditional Christian themes while using modern forms and rhythms, speaking to and for a generation that had seen devastation like no other before it. The traditional meets the modern in Eliot’s works in which he models the maxim that the church must reinterpret scripture and doctrine for every generation.

9.  Among his poems are “The Love Song of Alfred J. Prufrock,” “The Waste Land,” “The Hollow Men,” “Ash Wednesday,” “Four Quartets,” and “The Journey of the Magi;” most famous among his plays is “Murder in the Cathedral” (the story of the martyrdom of Thomas a Becket at Canterbury written entirely in verse).

8.  He won the Nobel Price in Literature in 1948 for his “outstanding, pioneer contribution to present-day poetry.” Prior to Eliot’s acceptance speech at the Nobel Banquet in Stockholm, Gustaf Hellstrom of the Swedish Academy said of him, “As a poet you have, Mr. Eliot, for decades, exercised a greater influence on your contemporaries and younger fellow writers than perhaps anyone else of our time.”

7.  Eliot’s collection of poems about the psychology and social habits of kitties – Old Possum’s Book of Practical Cats –  was the basis for the long running Broadway musical Cats by Andrew Lloyd Webber featuring Skimbleshanks the Railway Cat, Mr. Mistoffelees, Old Deuteronomy, and (Aspara)Gus the Theater Cat, et al. Sadly, the SEC says there are no cat videos at Lent Madness, or I’d link to one.

6. For all you coffee lovers out there, he included this famous line in The Love Song of J. Alfred Prufrock. “I have measured out my life with coffee spoons….” No doubt into his Lent Madness coffee mug, had he owned one.

5. More seriously, Eliot is considered a “supreme interpreter of mediated experience.” He himself said, “A poet must take as his material his own language as it is actually spoken around him.” A fine example comes from The Wasteland (Part I. Burial of the Dead): “I will show you fear in a handful of dust.”

4. And who among us does not love the ending of the The Journey of the Magi:

“We returned to our places, these
Kingdoms,
But no longer at ease here, in the old
dispensation,
With an alien people clutching their
gods.
I should be glad of another death.”

“We only live, only suspire
Consumed by either fire or fire.
….
We shall not cease from exploration
And the end of all our exploring
Will be to arrive where we started
And know the place for the first time.”

1.  And finally, heed Eliot’s words from his play Murder in the Cathedral that explain why Sir Anthony Strallan should not marry Lady Edith – I mean, that explain why you should vote for Eliot to join the 2013 Lent Madness bracket of saints:

“Now is my way clear, now is the meaning plain:
Temptation shall not come in this kind again.
The last temptation is the greatest treason:
To do the right deed for the wrong reason.”
— Penny Nash