Welcome back to Lent Madness! We trust everyone survived early onset Lent Madness Withdrawal (LMW) over the weekend and is ready for another full week of  voting. Thanks to Lent Madness more people than ever before now look forward to both Lent and Mondays. A Monday in Lent? Pure Nirvana.

In one of the most diabolical match-ups in the history of Lent Madness, we pit two heavyweights up against one another: Martin Luther and Martin Luther King, Jr. This ranks up there with last year’s Great Oedipal Battle between St. Augustine and his mother Monnica (which mom won). If you’re looking to blame someone for this, why not focus your attention on MLK’s parents rather than on the SEC? We wouldn’t have this problem if they’d named him Bob King or Gregory of Nyssa King.

You’ll be glad to know that PBS evidently foresaw this match-up and posted a quiz titled “Who Said What?” Quotes are presented and participants then guess which one said it — Martin Luther or Martin Luther King. Test your knowledge!

And finally, it’s worth noting that at this point we are precisely halfway through the first round of Lent Madness. Four match-ups for the Round of the Saintly Sixteen have already been decided: Jonathan Daniels vs. Janani Luwum; Oscar Romero vs. Lucy; Ignatius of Antioch vs. Hilda of Whitby; and Luke vs. John Donne. Yowza! 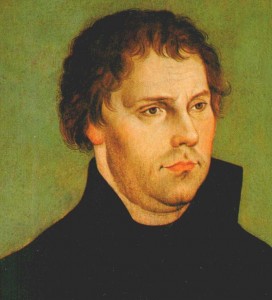 “In any century in which he was born, Luther would have guaranteed a richly memorable night out, whether hilariously entertaining or infuriatingly quarrelsome.” – Diarmaid MacCulloch

Martin Luther (1483-1546) didn’t need to worry about his career since his father had already decided it would be practicing law. But when he feared he might die in a severe thunderstorm, Luther the law student vowed to become Luther the monk. He entered Erfurt’s Augustinian monastery in 1505 and was ordained a priest in 1507.

Luther’s visit to Rome wasn’t the spiritual highlight he expected. He ascended the Santa Scala on his knees, saying the Lord’s Prayer on each step to release his grandfather from purgatory. Afterwards, he asked himself, “Who knows if it is really true?”

He began to question whether these things could indeed bring him closer to God. He started going to confession frequently (and anxiously). He tried to be the perfect monk, yet his conscience remained troubled. Finally, Luther was sent to the Augustinian monastery in Wittenberg in 1511 and earned his doctorate in 1512. At the newly established University of Wittenberg, he began to teach the Bible, going beyond the official Latin texts to study the Hebrew and Greek texts. Several years later he came to understand the “righteousness of God” in the Letter to the Romans to refer to a gift of God’s grace rather than a humanly impossible demand.

Pope Leo X issued an indulgence to shorten time in purgatory for faithful Catholics and, more practically, to finance an unfinished building project –- St. Peter’s Basilica. Johann Tetzel, a Dominican friar, was the salesman for these indulgences in Germany. Luther’s anger at Tetzel’s theology and business practices led to his nailing of 95 theses on the door of the castle church in Wittenberg on the eve of All Saints’ Day, October 31, 1517 (or at the very least he sent a copy of them to his bishop – yes, there is a nailing vs. “mailing” only dispute). Here’s number 27: “They preach only human doctrines who say that as soon as the money clinks into the money chest, the soul flies out of purgatory.” Words such as these made Luther into a bestselling author thanks to the newly invented Gutenberg printing press.

Several months after he was excommunicated in 1521, Luther appeared at the Diet of Worms before the Holy Roman Emperor. Luther refused to recant his writings. He was “abducted” on his return home and hidden in a remote castle, the Wartburg, for his own protection. Alone, he sank into a depression but began his greatest project – a translation of the Bible into the German language. The rest, as they say, is history (i.e., The Protestant Reformation).

Collect for Martin Luther
O God, our refuge and our strength: You raised up your servant Martin Luther to reform and renew your Church in the light of your word. Defend and purify the Church in our own day and grant that, through faith, we may boldly proclaim the riches of your grace which you have made known in Jesus Christ our Savior, who with you and the Holy Spirit, lives and reigns, one God, now and for ever. Amen. 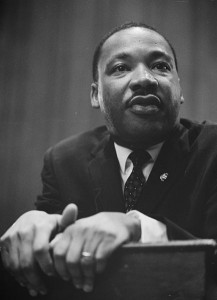 Martin Luther King, Jr. was, to quote the man who presented him with the Nobel Peace Prize in 1964, “the first person in the Western world to have shown us that a struggle can be waged without violence.”

Born Michael King, Jr., on January 15, 1929, his father, a Baptist minister, changed both their names to Martin Luther King in honor of the Protestant reformer.

At age 26 Martin, Jr., by then a Baptist minister himself, was chosen to lead the Montgomery (Alabama) bus boycott after Rosa Parks was arrested for refusing to give up her seat on the bus to a white man. King’s strategy for this and all of his continuing efforts in the struggle for civil rights for blacks in the segregated South was to meld the precepts of non-violent resistance he admired in Gandhi with the Gospel of love espoused by Jesus Christ and the tenets of the Christian social gospel of Rauschenbusch with the strategy of civil disobedience championed by Thoreau. The result was a twelve-year career leading non-violent social protest against racial inequality through boycotts, sit-ins, and marches — which led to the passing of the 1964 Civil Rights Act and the 1965 Voting Rights Act, ending legal segregation in America.

For his efforts, he was vilified from every side. White clergymen told him that Jesus had nothing to do with civil rights and ministers shouldn’t get involved in politics. The young Black Power and Black Nationalist leaders repudiated King’s dream of (and struggle for) a non-segregated, non-violent world and obedience to Jesus’ command to love his enemies. A black woman stabbed him with a letter opener at a Harlem book signing, and a white man shot him in Memphis. His house was bombed, and he was arrested thirty times — the first time for driving five miles-per-hour over the speed limit. The FBI wiretapped his phones.

But he also inspired young blacks to occupy a segregated lunch counter and endure without retaliation white patrons putting out cigarettes on their necks, black citizens of all ages to walk everywhere for 381 days to protest segregated busses, and a white President Johnson to call out the brutality of the white response to Civil Rights efforts and push through the legislation that would end segregation.

Collect for Martin Luther King, Jr.
Almighty God, by the hand of Moses your servant you led your people out of slavery, and made them free at last: Grant that your Church, following the example of your prophet Martin Luther King, may resist oppression in the name of your love, and may secure for all your children the blessed liberty of the Gospel of Jesus Christ; who lives and reigns with you and the Holy Spirit, one God, now and for ever. Amen.
— Penny Nash