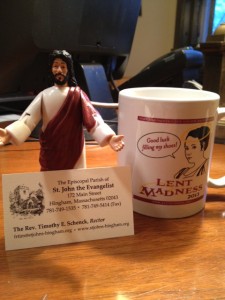 You'll be relieved to know that Tim  has finally received his 2013 Lent Madness mug from the world-renowned Forward Movement Mug & Tchotchke Warehouse in Cincinnati, Ohio. Sure, it was a full five days after his own curate received hers but the tenuous Lenten Détente between the two members of the Supreme Executive Committee has been solidified. For now.

Many of the Lent Madness faithful have expressed their deep concern about this situation and it has, frankly, disrupted their enjoyment of the first week of match-ups. Please know that Tim deeply appreciates the various protest songs that have been written to help rectify this injustice. Of particular note was Bob Dylan's recording of "Like a Rolling Mug." But Arlo Guthrie's line "Tim can't get the mug he wants at Scott's Restuarant" was also appreciated. 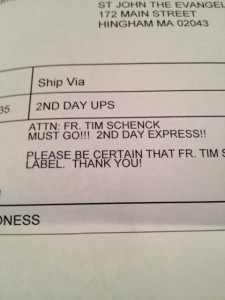 We're glad to have this nagging mug controversy behind us so we can focus our attention where it belongs: on complaints about how Lent Madness is too frivolous for such a penitential season.

If you're interested in purchasing your own mug, click here. Everyone (including Tim and the Presiding Bishop) have one. They may be on back order but Scott insists they'll be in soon and that you'll likely have it in your hot little hand before the arrival of Tim's next batch of Forward Day by Day.