A day after the biggest whuppin' of Lent Madness 2013, we meet two more fascinating figures on our continuing journey toward the Golden Halo. At first glance, Nicholas Ferrar, an early 17th-century Englishman, and Harriet Tubman, a 19th-century African-American born into slavery, seemingly have nothing in common. But of course, that's the thing about Lent Madness -- even the most disparate saints all have Jesus Christ at the center of their lives.

Yesterday, poor Chad of Lichfield was left hanging as Florence Li-Tim Oi trounced him 84% to 16%. The wide margin was pretty consistent throughout the day as those who obsessively check the results every ten minutes know.

In other news, the Supreme Executive Committee released a statement condemning an attempt to co-opt the bracket format to elect the next pope. They will, however, be forming a bracket to elect the next Presiding Bishop of the Episcopal Church. Because that's different. 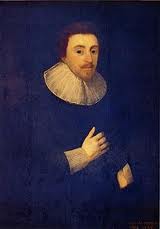 Nicholas Ferrar (1592-1637) was born to a wealthy English family during the reign of Elizabeth I. Educated at Cambridge, he traveled abroad because of ill health after his studies ended. His travels were not serene -- an encounter with a sliding donkey almost sent him over a German precipice, and his ship to Spain was chased by pirates. Returning home, he was called to assist his family in saving The Virginia Company, which had fallen upon hard times. He was elected to Parliament, but his efforts to save the company failed and it lost its charter.

At that point, Nicholas and his family determined to renounce worldliness and commit themselves to a life of prayer and godly living. About thirty of the family joined him at Little Gidding where he founded and led a unique religious community -- an experiment in Christian living that was neither cult nor cloister.

Ferrar was ordained a deacon by Archbishop Laud in 1626 so that he could lead the community in worship (although he never considered the priesthood). His mother restored the church of St. John the Evangelist (abandoned during the 14th-century outbreak of the Black Death) before restoring the manor house for the family’s use.

Once settled, the community was committed to constant prayer (members took turns praying at the altar to obey the command to pray without ceasing) and they recited the entire Psalter every day in addition to praying all the offices from the Book of Common Prayer.

They also fasted and offered alms to relieve the poor, worked in the community to educate and look after the health of the local children, and also wrote books on the Christian faith. Some of the community members learned bookbinding; one of their books, a commission of a Gospel harmony by King Charles I, now resides in the British Library.

Ferrar was a college friend of George Herbert and upon his deathbed, Herbert sent the manuscript of his book of poems The Temple to Nicholas, asking him to determine whether it was worthy to be published, and if not, to burn it. Ferrar published The Temple in 1633.

Ferrar died in 1637 and is buried in front of the church door of St John the Evangelist at Little Gidding. The community was later broken up by Puritans, who called it an “Arminian Nunnery” and threw the brass font into the pond. The font was rescued and returned to the church 200 years later.

Collect for Nicholas Ferrar
Lord God, make us so reflect your perfect love; that, with your Deacon Nicholas Ferrar and his household, we may rule ourselves according to your Word, and serve you with our whole heart; through Jesus Christ our Lord, who lives and reigns with you and the Holy Spirit, one God, for ever and ever. Amen. 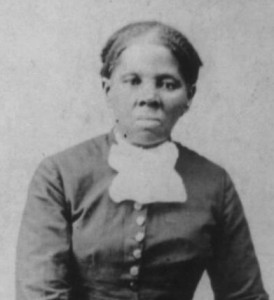 The early details of Harriet Tubman's life are fuzzy. So far as anyone can tell, and as far as she could later remember, she was born somewhere around 1822 on a plantation in Dorchester County, on Maryland's Eastern Shore. She was named Araminta Harriet Ross, and she grew up enslaved, working as a field hand.

During this time, while she was still in her early teens, she got into an altercation with an overseer, who was trying to catch a fleeing slave. She jumped in front of the escaping man, and in the melee, the overseer hurled an iron at her head. Harriet lay unconscious for several days, without treatment, and as a result, she suffered headaches, blackouts, sleeping spells, and hallucinations for the rest of her life.

For anyone else, this would have been a crippling setback, but for Harriet, the hallucinations were visions sent from God. They warned her of approaching danger, and assured her of God's love and care for her and her people. In 1849, she escaped her captivity, and headed north to New York and freedom.

Almost immediately, she turned around, and came back to bring her family out as well. When the Fugitive Slave Act was passed in 1850, making it unsafe for former slaves even in the northern states, Harriet was undeterred, and just ferried everyone on up to Ontario without skipping a beat. She earned the nickname "Moses" among the slaves, and the signal for her approach on the Underground Railroad was the song "Go Down, Moses." (Meanwhile, advertisements were still being posted for her capture, with her former owner describing her as barely 5 feet tall, 'very pretty,' and calling her 'Minty').

When the war came, Harriet signed up. She became a cook and a nurse for the Union army, then when that proved unsatisfying, a spy and a soldier, leading Union troops onto Southern plantations to free the slaves, and lead them in revolt. (She did all this without being paid at all -- being black and a woman was not a recipe for getting paid by the US government at the time). After the war, she went back to her home in New York, where she became active in the struggle for women's suffrage. She helped write a book about her life, which ameliorated her financial situation somewhat. However, being Harriet Tubman, she immediately turned around and donated her financial holdings to the local AME Zion church and demanded that they open a home for the aged and infirm.

To the beginning of her life, through the end, Harriet lived by one rule -- so that no one else would have to suffer as she had.

Collect for Harriet Tubman (and some other people)
O God, whose Spirit guides us into all truth, and makes us free; strengthen and sustain us as you did your servant/s [Elizabeth, Amelia, Sojourner, and] Harriet.  Give us vision and courage to stand against oppression and injustice and all that works against the glorious liberty to which you call all your children; through Jesus Christ our Savior, who lives and reigns with you and the Holy Spirit, one God, for ever and ever. Amen.