The (Lent) Madness continues with another surreal pairing -- this time between an influential 16th-century church musician and a 20th-century Ugandan archbishop and martyr. This match-up even has the holy odds-makers in Vegas shaking their collective heads.

Yesterday, Luke outpaced Absalom Jones by a wide margin, 61% to 39% with over 4,500 votes cast, though many commented on Jones' inspirational story in bidding him farewell. For some commentary on why these pairings are often so difficult, make sure to watch the most recent version of Monday Madness with Tim and Scott. This, along with many other mysteries such as where Scott likes to stay when in Silver Spring, Maryland, and how he copes without his trusty Lent Madness 2013 mug, will be revealed.

In other news, we passed the 4,000 "like" mark on our Facebook page. Don't forget to like us if you haven't yet done so and encourage your friends to go and do likewise. There's no finder's fee for getting people to join in the Madness; you'll just have to be content with the knowledge that your reward will be in heaven. 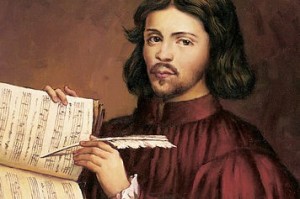 Thomas Tallis is considered the father of English Church music. Little is known about his personal life. We don’t know when he was born, we don’t know if he did or didn’t sing with the Chapel Royal of St. James boys’ choir, we have no idea what he really looked like, and we don’t know how really how to spell his last name - the one copy of his signature we have shows Tallys.

What we do know is he forever changed church music with his compositions. His legacy sings to us in music glorifying God, expressing hope and lament, joy and veneration. He composed elegantly simple tunes that welcome the gracious light of dusk in Tallis’ Canon and intricately complex motets, like Spem in Alium, a 40-part motet expressing humanity’s eternal hope in God.

He and his contemporaries Merbecke and Byrd, lived and composed in a time of significant political and religious upheaval. The Tudor throne of England shifted British religion from Roman Catholic to English Protestant back to Roman Catholic and finally to Anglicanism. Throughout these massive shifts, all composed the music which allowed the words of the prayers to sing.

Tallis’ talent and political maneuvering brought him to the  personal choir for the British monarchy. During his adult life, Tallis taught, composed, and performed for Henry VIII, Edward VI, Mary, and Elizabeth I and their courts and managed not to get himself executed.  Few musicians past or present have the ability to compose and perform in the style that suited the ever-changing tastes of religious folks, but Tallis did.

Tallis and Byrd eventually became business partners and held the Crown Patent for the printing of music and lined music paper for 21 years, as well as a monopoly on polyphonic music, one of the first arrangements of this type in England. If composers of the day wanted to print music or get paper to write down compositions in Tudor England, they had to pay Tallis. While this sounds like Tallis and Byrd were the Cosa Nostra of the Tudor British Music world, they didn’t own a printing press. Thus, they didn’t make much money from their arrangement. Tallis, like many saints, was creative, passionate, and not so awesome in business.

He died at home in Greenwich in November 1585 and was buried in the chancel of St. Alfege Church. His remains were likely discarded in the early 18th century by laborers rebuilding the church. His music, however, is with us, sung almost every week in prayer and praise to God.

Collect for Thomas Tallis (and some others)
O God most glorious, whose praises are sung night and day by your saints and angels in heaven: We give you thanks for William Byrd, John Merbecke, and Thomas Tallis, whose music has enriched the praise that your Church offers you here on earth. Grant, we pray, to all who are touched by the power of music such glimpses of eternity that we may be made ready to join your saints in heaven and behold your glory unveiled for evermore; through Jesus Christ our Lord, who lives and reigns with you and the Holy Spirit, one God, for ever and ever. Amen. 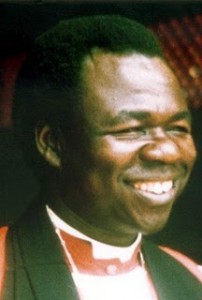 Above the Great West Doors of Westminster Abbey are ten statues of martyrs from the twentieth century. One of those statues depicts an African named Janani Luwum (1922-1977). He was a convert to Christianity and an Anglican priest. He eventually became the Archbishop of Uganda, Rwanda, Burundi, and Boga-Zaire. And he died for his faith thirty-six years ago last Sunday because he spoke out on behalf of others in the name of Christ. He gave a voice to those who could not speak for themselves. In the midst of Ugandan dictator Idi Amin’s brutal regime, Luwum warned the Church not to conform to “the powers of darkness.”

The story of Luwum’s death was told to me in the sermon at my ordination to the priesthood by someone who knew him well. This is how his friend and former colleague described it:

“He was a tall and very taciturn man. And if it had not been for the twinkle in his eye, you would have thought him perhaps even mean. But he was a kindly, large, and very strong man. One morning he was awakened early in his house by soldiers, who accused him of storing arms – which they never found – the purpose of which was to overthrow General Amin’s government.

“He was taken to a large amphitheatre in the middle of Kampala, where Amin had assembled his private guard, and where he was jeered. He was then taken by automobile to Luzira Prison, some five miles outside the city. And there he was tortured, and he was asked to confess his crime. His only response was to pray, ‘Our Father, who art in heaven, hallowed be thy Name, thy kingdom come, thy will be done…’ He prayed this prayer constantly for some time under the leader. And finally, in a rage, Amin pulled out a pistol and shot him twice – once in the head and once in the chest.

That is the story of Janani Luwum as it was told to me. It reminds me that in every time and place there are people like him – people empowered by the Holy Spirit – who would be willing to speak on our behalf if we were in need and could not speak for ourselves.

Collect for Janani Luwum
O God, whose Son the Good Shepherd laid down his life for the sheep: We give you thanks for your faithful shepherd Janani Luwum, who after his Savior’s example, gave up his life for the people of Uganda. Grant us to be so inspired by his witness that we make no peace with oppression, but live as those who are sealed with the cross of Christ, who died and rose again, and now lives and reigns with you and the Holy Spirit, one God, for ever and ever. Amen.