In the last battle before the Round of the Saintly Sixteen, we encounter two trailblazers. Edward Thomas Demby was the first African-American bishop ordained in the Episcopal Church and Dorothy Day was an important figure in the cause of social justice. Will Dorothy win the Day? Or will Edward Demby-onstrate the will to win? (sorry, couldn't come up with anything comparable for him). The winner will take on Benedict of Nursia in the next round.

In yesterday's action, Martha of Bethany trampled all over the "Little Flower," Thérèse of Lisieux. While we don't take sides, it's nice that we'll no longer have to search for those accents on Thérèse. Martha will face Harriet Tubman in what should prove to be a hotly contested battle. 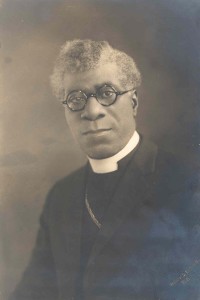 Edward Thomas Demby holds the distinction of being ordained the first African American bishop in the Episcopal Church. In 1918 he became the Suffragan Bishop for Colored Work in Arkansas and the Providence of the Southwest.

Bishop Demby, born in Wilmington, Delaware, and raised in Philadelphia, attended Howard University and Wilberforce University in Ohio. He then entered the academic world and from 1894 to 1896 was Dean of Students at Paul Quinn College in Texas. At this time he was confirmed in the Episcopal Church.

This is when Bishop John F. Spalding of Colorado took special interest in Demby. He went to work in the Diocese of Tennessee where he was ordained a deacon in 1898 and a priest the following year.

While in Tennessee, Demby served as rector at St. Paul’s Church in Mason as well as two posts in academic administration. Then, from 1900 to 1907 Demby ministered to parishes in Illinois, Missouri, and Florida.

Demby returned to Tennessee in 1907 to become rector of Emmanuel Church in Memphis. This is where he served as the Secretary of the segregated southern “colored convocations” and was the Archdeacon for Colored Work. It was while he was Archdeacon that he was elected the first African American suffragan bishop.

Demby's context was a segregated ministry, in which he worked tirelessly to establish black service institutions, like schools, hospitals and orphanages. Demby saw this as a way to build relationships with African Americans who, before emancipation, had understood the Episcopal Church as the faith community of their masters. However Demby’s witness, as a compassionate leader and committed Episcopalian, helped forge bonds that attracted many people and live on today.

For more than twenty years, Demby labored amidst white apathy, inconsistent funding, and the foggy commitment of his own denomination (not to mention the Great Depression) to build a ministry that would eventually evolve into desegregation.

Bishop Demby shares a feast day with the second African American bishop in the Episcopal Church, Henry Beard Delany, hence the wording of their Collect.

Collect for Edward Thomas Demby
Loving God, we thank you for the ministries of Edward Thomas Demby and Henry Beard Delany, bishops of your Church who, though limited by segregation, served faithfully to your honor and glory. Assist us, we pray, to break through the limitations of our own time, that we may minister in obedience to Jesus Christ; who with you and the Holy Spirit lives and reigns, one God, now and for ever. Amen. 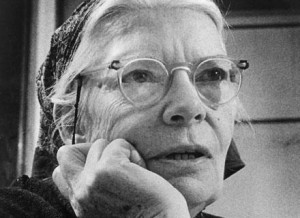 Dorothy Day, co-founder of the Catholic Worker movement, was born in Brooklyn in 1897. As a young girl, while living in San Francisco where her father was a journalist, she experienced the devastating earthquake of 1906. Her memory of the assistance people offered to those made homeless by the tragedy remained with her throughout her life.

Though her parents were not religious, her brothers were members of an Episcopal church choir and, from the age of ten, she attended services and became enamored of the liturgy and music. She was baptized and confirmed but continued to think of herself as an agnostic.

After dropping out of college, she lived a bohemian life in New York City. She wrote for socialist publications and immersed herself in the causes of pacifism and women’s suffrage. Gradually a spiritual awakening crystalized into a conversion to Christianity upon the birth of her daughter Tamar in 1927. She was received into the Roman Catholic Church and later became an Benedictine oblate.

In the midst of the Great Depression, with her friend and colleague Peter Maurin, Day founded the Catholic Worker movement. Their newspaper, the Catholic Worker, an immediate success, focused on promoting Catholic social teaching and offering a pacifist viewpoint in a period when international tensions increased around the world.

Implicit in the movement was the need to care for those in need. Houses of Hospitality were started first in New York to care for the needs of anyone who needed food, clothing, or shelter. Before long several farms were established to allow people to live in community and grow their own food. By the early 1940s, 30 Catholic Worker communities were established across the U.S. Today 100 communities serve people in ten countries.

Throughout her life, until her death in 1980, Day spoke of God’s love and the causes of peace and justice, even when she ran afoul of the Roman Catholic hierarchy. When broached by critics with Jesus’ words that the “poor shall always be with us,” she replied, "Yes, but we are not content that there should be so many of them.”

Novelist and theologian Frederick Buechner said, “Vocation is the place where your deep gladness and the world’s deep hunger meet.” Dorothy Day’s life bears witness to that definition; she remains an icon for those who would meld their Christian faith with the pursuit of social justice.

Collect for Dorothy Day
Merciful God, you called your servant  Dorothy Day to show us the face of Jesus in the poor and forsaken. By constant practice of the works of mercy, she embraced poverty and witnessed steadfastly to justice and peace. Count her among your saints and lead us all to become friends of the poor ones of the earth, and to recognize you in them. We ask this through your Son Jesus Christ, bringer of good news to the poor. Amen.