Gregory the Great vs. Martin of Tours

With another weekend rife with Lent Madness Withdrawal (LMW) behind us, we turn our attention to the final three first round match-ups. Now, to our credit, we did try to help everyone get through the weekend with a Group Hug. But today it's back to business with Gregory the Great (who defeated Gregory of Nyssa in an earlier play-in round) taking on Martin of Tours. As two bishops square off for the first time in Lent Madness 2013, we're left to wonder which one will leave the arena with a cracked crozier?

After today, the remaining first round battles pit Therese of Lisieux against Martha of Bethany and Edward Thomas Demby versus Dorothy Day. On Thursday the Round of the Saintly Sixteen kicks off with two modern martyrs: Jonathan Daniels vs. Janani Luwum. But in the meantime, hang onto your hats, miters, or any preferred headgear of your choice! 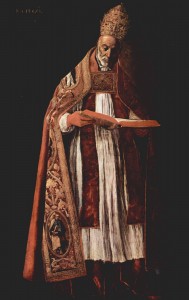 Long before he was known as “Gregory the Great,” he was just another boy born to an elite Roman family. His father owned estates in Sicily and the family home was a mansion on Caelian Hill. However, the mighty empire was in decline by his birth in 540. As a boy Gregory lived through repeated invasions by the Goths and Franks and a devastating plague. While his experiences are not recorded, it would be unlikely that he was unaffected by the uncertainties of civil society and his place in it.

Highly skilled in grammar and rhetoric and possessing a noble pedigree, he was destined for a prestigious career in public life. Indeed at age 30 he became a prefect of the city of Rome, but after much soul-searching and prayer he left his post to become a monk. He devoted himself to the ascetic life and turned his vast Sicilian estates into monasteries and his family home in Rome into one as well.

Gregory lived happily as a monk for several years until he was forced by the sitting pope -- much against his will -- to be ordained as one of the seven deacons of Rome. Because of the vast instability of Rome and his skills as a civil leader, he was swiftly dispatched to Constantinople to serve as the ambassador to the Byzantine court in order to plead for Rome’s need of protection from the Lombards. His mission was pretty much a failure, but he became very popular with aristocratic Greek ladies of a certain age. After six years he was recalled to Rome and so began a period of writing, studying, and preaching.

His contentment at returning to the monastic life was not to be, however. In 490 after a terrible year of floods, plague, and pestilence, Gregory was elected pope. The story that upon the confirmation of his election to the episcopate he ran away and hid in the forest for three days is considered apocryphal, but it does shed light on his frame of mind. Nevertheless, he did his duty.

He is known as the liturgical innovator of the 6th-century whose contributions to the order of worship endure to the present day. The form of music known as western plainchant is attributed to Gregory. (Though naming it after him a couple of hundred years after he died was a marketing move to capitalize on his venerated name in order to standardize liturgical practice across the Frankish empire under Charlemagne).

Hundreds of his sermons, letters, commentaries as well as his dialogues and his still well-regarded “The Rule for Pastors,” remain. A remarkable thing.

As pope he was a staunch advocate for the health and well-being of the poor and those displaced by war. He gave lavishly from his own substance and and became a gadfly to wealthy Romans by inducing them to give generously as well.

Gregory the Great’s compassion for the plight of young Anglo-Saxon slaves  (Non Angli, sed angeli --  “They are not Angles, but angels”) he encountered at the Roman Forum so moved him that, later as pope, he sent St. Augustine to England as a missionary. But for his compassion, we might still be worshiping gods with names like Woden and Tiw.

Shortly after his death in 604, he was canonized by popular acclaim, and John Calvin called him “the last good pope.” Gregory the Great skillfully navigated a complex landscape between the ancient and the medieval church and the wider world. Quite a skillset for a man who talked to doves.

Collect for Gregory the Great
Almighty and merciful God, you raised up Gregory of Rome to be a servant of the servants of God, and inspired him to send missionaries to preach the Gospel to the English people: Preserve in your Church the catholic and apostolic faith they taught, that your people, being fruitful in every good work, may receive the crown of glory that never fades away; through Jesus Christ our Lord, who lives and reigns with you and the Holy Spirit, one God, for ever and ever. Amen. 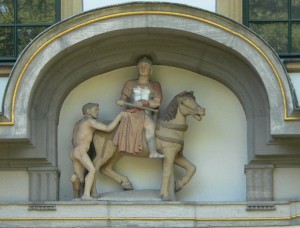 Martin of Tours was born in 330 in Hungary. He spent much of his childhood in Italy where he was reared by pagan parents. His father, a soldier, enlisted Martin into the army when he was 15.

Surely he had some Christian leanings, for one winter day he saw a beggar at the gate in Amiens (France). Martin, who had no money to give the ill-clad man, offered, instead, a portion of his cloak. The accompanying photo shows this famous event, in which Martin cut his cloak in half so that he could share it with the beggar.

That night, as the story goes, Martin had a dream in which he saw Christ wearing a coat -- in fact, the same cloak that Martin had given the beggar just hours before. This is when Martin knew he had to devote his life to serving Christ. He resolved to get baptized and become a Christian. At the conclusion of his next military campaign, Martin petitioned for release from the army with the famous words, "Hitherto I have faithfully served Caesar. Let me know serve Christ.” At the time Martin was accused of desertion and being a coward. He was subsequently imprisoned but soon released.

Martin became a disciple of Hilary of Poitiers, who was a chief opponent of an unorthodox believe called Arianism. These Christians denied the full deity of Christ, which Martin defended with such vigor and skill that he began to make a name for himself. Surviving persecution in Italy, he fled to France where he founded a monastery that was so successful it remained open until the French Revolution. Martin was eventually named bishop of Tours, a notoriously pagan diocese. However his compassionate personality, skill in dealing with people, and devotion to his mission, prevailed.

Today Martin is the patron saint of soldiers and his shrine in France has become a famous stopping point for pilgrims on the road to Santiago de Compostela.

Collect for Martin of Tours
Lord God of hosts, you clothed your servant Martin the soldier with the spirit of sacrifice, and set him as a bishop in your Church to be a defender of the catholic faith: Give us grace to follow in his holy steps, that at the last we may be found clothed with righteousness in the dwellings of peace; through Jesus Christ our Lord, who lives and reigns with you and the Holy Spirit, one God, for ever and ever. Amen.

Gregory the Great vs. Martin of Tours

165 comments on “Gregory the Great vs. Martin of Tours”