And then there were eight. Through your voting and politicking and advocating and agonizing, we have collectively whittled down the field of 32 saints to a mere eight as we continue our march to the 2013 Golden Halo. Welcome to the Round of the Elate Eight, aka the Round of Saintly Kitsch.

Here are the match-ups for the rest of the week: today it's modern Civil Rights martyr Jonathan Daniels vs. the 2013 Lent Madness Cinderella, Frances Perkins. Wednesday: Florence Li Tim-Oi vs. Oscar Romero. Thursday: Harriet Tubman vs. Hilda of Whitby. Friday: Luke the Evangelist vs. Dorothy Day (who defeated Benedict yesterday). Good luck with that. With all of these match-ups, if you need a refresher on these saints beyond the kitsch, simply click on the Bracket 2013 link and scroll down -- you'll find hyperlinks to all of the previous battles listed by round.

Jonathan made it to this point by defeating Macrina the Younger and Janani Luwum while Frances earned her spot in the Elate Eight by overcoming Damien of Molokai and Martin Luther King, Jr. One intriguing thing about this particular match-up is that both have New England roots and Massachusetts connections. Daniels hails from Keene, New Hampshire, while Perkins is from Newcastle, Maine. Daniels attended Episcopal Divinity School in Cambridge while Perkins is an alum of Mount Holyoke College in South Hadley. However, as far as Tim knows, neither one ever stepped foot in Hingham.

Last year the Supreme Executive Committee responded to those who didn't appreciate our kitsch in a post titled Kitsch Cranks. Sure, it's a bit snarky but it's a pretty good statement about where we stand on the issue. If there's anything we'd do differently, it would be to title it "Kitsch Kranks" because the "K's" form a better visual. Alas.

And finally, if you missed yesterday's Monday Madness video, Tim and Scott talk kitsch and even suffer through a certain holy "interruption." Oh, and like us on Facebook -- the Surgeon General insists it's good for your mental health.

From a series of exhaustive searches through the seedy underbelly of the internet that is Etsy and Pinterest, one might conclude that the Lent Madness kitsch cause for Jonathan Daniels is lost. In fact, Zazzle, that monumental edifice to internet kitsch, the site which is dedicated to the proposition that your cat, Mr. Biggles, is not only worthy of her own iPhone case – but that other people want to buy it – returns no results!

One might begin to think hope is lost. But lo, out of darkness, a light breaks from Jonathan Daniels Elementary 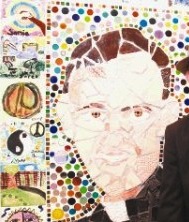 School in Keene, NH. On the walls of the school hangs a very brightly colored mosaic of the school’s namesake, no doubt lovingly crafted by its students. (According to a story from the Keene Sentinel – unfortunately located behind an internet paywall - one student at the school has proposed the building of a museum dedicated to Daniels – a worthy cause indeed, and worth the Lent Madness public rallying around, if it is indeed still in the works.)

While there isn’t much kitsch for Daniels personally, various aspects of his life are very well represented in the kitsch-o-verse. In what is either a deep act of homage or a statement of extreme passive-aggressive feelings towards the Granite State, one may buy this lovely cutting board of Daniels’ home state. 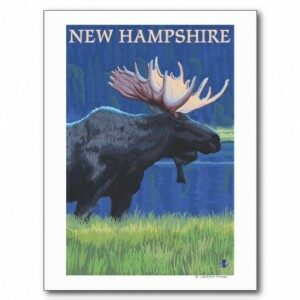 If framed NH-themed art is more of your thing, I suggest this stunning image, entitled “Moose in the Moonlight.” For the record, we have no idea whether Daniels had a pet moose as a child. (You can also find various Moose-Themed Coffee Mugs, but we wouldn’t dare undercut mug sales over at the Lent Madness “Lentorium.”)

College kitsch is, of course, relatively easy to procure. Daniels’ alma mater, the Virginia Military Institute, offers this one- 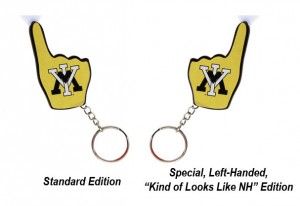 of-a-kind “We’re Number One” flashlight keychain. When looking at a “left-handed” version of the keychain, we note it looks much like Daniels’ home state of New Hampshire – no doubt in homage to one of VMI’s most distinguished graduates.

Perhaps one of the most common threads in New Hampshire kitsch – from the state’s license plates, to trucker hats with bears, and everything in between – is a devotion to the state’s motto: “Live Free or Die.” That seems to be the right note on which to end: Jonathan Daniels ultimately gave his life in the service of God, and of that ideal – that all of God’s children should enjoy equal rights and freedoms given to them for the service and glory of Jesus Christ.

For a Celebrity Blogger,  the Elate Eight round is fraught with fear. What if there IS NO SAINTLY KITSCH? After all, Frances Perkins was a serious woman who took her faith and her public service seriously.

Q: How many kitschy items could there possibly be for Secretary Perkins? 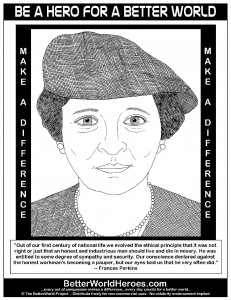 First, to help children learn about heroes of history, there is the “Color Me Perkins” coloring sheet. You can download it here. 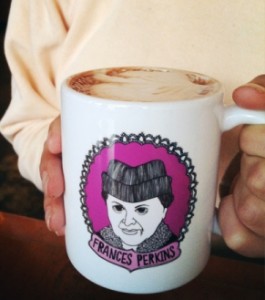 To help you start your day, there’s the Frances Perkins mug. Available for $12.95, it’s “the perfect gift for the coffee and tea drinkin' feminists in your life.” 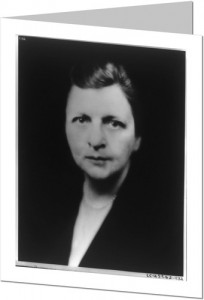 Let’s say you’ve put the finishing touches on the most influential legislation of the 21st century and would like to send it off with a friendly handwritten note to the Congressional leadership, you could not go wrong with a Frances Perkins notecard.

There is also a Frances Perkins cartoon by Michael 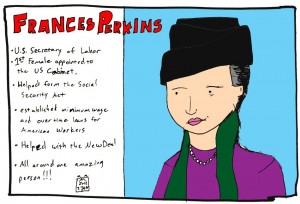 McLean at Mini Dove Comics and, for the more serious among us, a lovely poster. 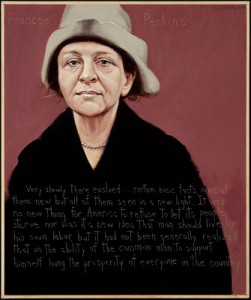 But the mother-perkins-lode may be found on the Mount Holyoke College website where some good soul has gathered no fewer than 57 (57!) examples of First Day Covers (FDC) of the Frances Perkins postage stamp issued to commemorate her 100th birthday on April 10, 1980.

Having studied all 57, I can assure you that not all FDC art is created equal. Here are two of my favorites. The first makes 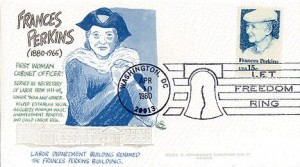 her look like she’s playing Mel Gibson’s mother in “The Patriot,” and the second, besides being a little goofy, gets her birth year wrong.

“But these commemorations are all secular!” some may say. “What do they have to do with serving God?” 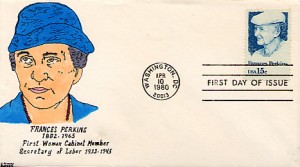 When Frances Perkins said, “I came to Washington to serve God, FDR, and millions of forgotten, plain common workingmen,” she demonstrated by her life and work that there is no secular world. It all belongs to God.