In a rare battle of contemporaries, Martin Luther King, Jr. takes on Frances Perkins in today’s Lent Madness match-up. Will quirks, quotes, or a combination win the day? To get to this point, MLK had to fend off his namesake, Protestant Reformer Martin Luther, while Frances Perkins felled Hawaiian Damien of Molokai.

More questions: Will U.S. Labor Department employees turn out for their former Secretary thereby fueling further controversy? Will Heidi’s going way over the word count impact the outcome? What about all those Mount Holyoke alums jazzed to support one of their own? Or will everyone be walking to Selma by the end of the day?

Yesterday Luke sent John Donne to the literary showers and will face the winner of Benedict of Nursia vs. Dorothy Day in the Elate Eight. And in our “To 5,000 and Beyond!” campaign we’re rapidly closing in on 5,000 likes on our Facebook page. In fact we’re at 4,990+ as of this morning. The 5,000th Lent Madness liker will receive the grand prize of dinner with Tim and Scott! (fine print: winner is responsible for travel expenses, luxurious accommodations, and the cost of a fancy dinner).

In Lent Madness evangelism news, Tim will be appearing live on Boston Public Radio this afternoon sometime between 1:00 and 2:00 pm to talk about everyone’s favorite Lenten devotion. If you want to tune in to WGBH go here and then click the “Listen Live” button. This could be a disaster. 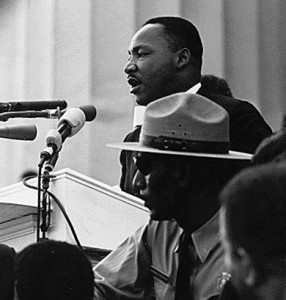 Martin Luther King, Jr., must have been an interesting student. Finishing high school at fifteen, in college he excelled in Bible but struggled with French. At seminary, he made a C in public speaking — twice!

He and his wife, Coretta Scott King, spent their 1953 honeymoon at a funeral parlor because they couldn’t stay at at a white-owned hotel.

In 1967, he convinced Nichelle Nichols to continue in her role as Lt. Uhura on Star Trek because she was portraying an intelligent crew member who happened to be black rather than a stereotype. “I’m your biggest fan,” he told her.

Harassed, bombed, jailed, stabbed, and finally assassinated at age 39, the focus of King’s life work was justice for all people based on the command of the Gospel. He frequently quoted the prophet Amos: “We will not be satisfied until justice rolls down like waters and righteousness like a mighty stream.”

And he always maintained hope. “The arc of the moral universe is long,” he said, “but it bends toward justice.”

“Nonviolence,” he said at his Nobel Prize acceptance speech, “is the answer to the crucial political and moral question of our time — the need for man to overcome oppression and violence without resorting to violence and oppression.”

His vision was always on the life and work of Christ and the promise of God. “I believe that unarmed truth and unconditional love will have the final word in reality. This is why right temporarily defeated is stronger than evil triumphant.”

On the other hand, he had harsh words for the church: “So here we are moving toward the exit of the 20th-century with a religious community largely adjusted to the status quo, standing as a taillight behind other community agencies rather than a headlight leading men to higher levels of justice.”

King fervently believed that the work of Christians is not about “pie in the sky by and by” but that we are called to transform this world with the “fierce urgency of now.” “The gospel at its best deals with the whole man, not only his soul but his body, not only his spiritual well-being, but his material well-being. Any religion that professes to be concerned about the souls of men and is not concerned about the slums that damn them, the economic conditions that strangle them and the social conditions that cripple them is a spiritually moribund religion awaiting burial.”

Dr. King had a dream of a transformed world and believed that dream “will be accomplished by persons who have the courage to put an end to suffering by willingly suffering themselves rather than inflict suffering on others.”

Please add your favorite quotes from Martin Luther King, Jr. in the comments! 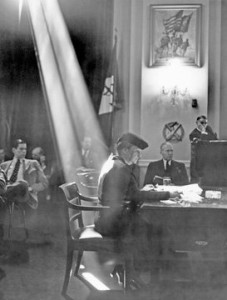 Frances Perkins, Labor Secretary from 1933 to 1945 under Franklin D. Roosevelt, was the first woman to serve in a presidential cabinet. As Secretary of Labor, she was the prime mover of the New Deal, championing a social safety net to the elderly, minimum wage, the Civilian Conservation Corps (CCC), unemployment insurance, a shorter work week, and worker safety regulations. It is said that she wrote wrote the Social Security Act in the rectory of St. James’ Episcopal Church in Washington, DC.

Kirstin Downey, in her recent biography of Perkins, The Woman Behind the New Deal: The Life of Frances Perkins, FDR’S Secretary of Labor and His Moral Conscience describes the role of faith in her life. It “served as a bedrock and a way to seek meaning in life when so much seemed inexplicable. These religious leanings became progressively more pronounced over time. When friends once questioned why it was important to help the poor, Frances responded that it was what Jesus would want them to do.”

While many comments in the first round of Lent Madness pointed to the likelihood of Perkins living an opulent, la-de-da life in Washington, Downey points to a position in Philadelphia that Perkins took in the first decade of the last century. She worked on behalf of poor, immigrant young women who were brought to the U.S. to work at what they thought were legitimate jobs but turned out to be prostitution. “Frances’s job,” writes, Downey, “was to find ways to put pimps and drug dealers out of business, to detect, confront, and bring to law enforcement’s attention the establishment’s preying on women: work considered daunting for even the most experienced social workers.

By the time she was in her early thirties, Perkins’ advocacy had led her to the New York State Legislature where, in 1913, she successfully campaigned for the 54-hour work week(!). It was around this time, even though women did not yet have the vote, that Frances began to appreciate the finer points of gaining influence in the halls of power controlled almost exclusively by men. Still a young woman, she realized that men respected their mothers and so began, rather than craft her appearance in a way that was attractive to men, to dress and comport herself in a way that would remind men of their mothers.

From early in her public life, Perkins had a strong sense of what constitutes the common good and the inherent value in every human life, “Our idea….has advanced with the procession of the ages, from those desperate times when just to keep body and soul together was an achievement, to the great present when ‘good’ includes an agreeable, stable civilization accessible to all, the opportunity of each to develop his particular genius and the privilege of mutual usefulness.”

She also said, “I don’t see how people who don’t believe in God can go on in this world as it is today.”

But while she faced many challenges in her personal life as well as obstacles in her professional life, her belief in action and the ability of a small group of people to create change is reflected in this quote: “Most of man’s problems upon this planet, in the long history of the race, have been met and solved either partially or as a whole by experiment based on common sense and carried out with courage.”

Adam Cohen, former New York Times editorial writer and FDR historian, wrote, “If American history textbooks accurately reflected the past, Frances Perkins would be recognized as one of the nation’s greatest heroes – as iconic as Benjamin Franklin or Thomas Paine. Like Franklin, Perkins was a brilliant self-creation….  Like Paine, Perkins helped to start a revolution….  The New Deal was Perkins’ revolution, and it did nothing less than create modern America.”

Her advocacy for asylum seekers in the 1930s, through not as successful for German Jews as she would have liked, resulted in helping the Von Trapp family achieve asylum in the U.S. Because until 1940 the Department of Labor controlled the U.S. Immigration Service, Perkins was successful in helping to extend, often permanently, the visitor visas of at least 30,000 German Jews already in the U.S. Sadly, tussles with the Department of State and lack of solidarity among American Jewish leaders (many of whom worried that a great influx of Jews from Europe would heighten anti-Semitism at home) hampered her ability to persuade FDR to increase quotas. Perhaps as many as 1,000 asylum seekers, about 400 of them children in a special program, were eventually brought to the U.S prior to its entering the war.

While Frances Perkins’ roots in Maine run deep — the Frances Perkins Center is based in Newcastle, Maine (where I happen to live) — she was little known here until March 2011 when Governor Paul LePage decreed that a federally-funded public work of art, a 36-foot mural depicting moments from Maine’s labor history, was to be removed from the Maine Department of Labor offices in Augusta. Perkins is featured on one of the panels. As anger and lawsuits about the mural’s removal raged throughout Maine, Perkins’ name and stock rose quickly. After spending nearly two years in “an undisclosed location,” the mural was installed in the Maine State Museum in January 2013. Come on up and see it.