Back to Lent Month: Letters From Ruby 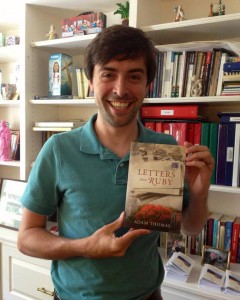 Back to Lent Month continues as we highlight Bracket Czar Adam Thomas' new work of fiction, Letters from Ruby. What's the book about? According to the back cover...

Not everything a young pastor needs to know can be taught in school.
Not much triumph remains in Victory, West Virginia, where the loss of the railroad and the housing bust have conspired to send the once vibrant town into decline. Only a few buildings in downtown Victory still have the lights on, including St. John's Episcopal Church, which serves an ever-dwindling population of worshipers.

The newly ordained priest Rev. Calvin Harper arrives at the ailing church hoping to help it grow and regain some of its former glory. But Calvin has no idea how much he still has to learn about leadership, about ministry, and about life in general.

When the young man's inexperience threatens to divide Calvin from his new church family, Ruby Redding takes him under her wing. Ruby is one of those rare women who is so full of God’s light that it can't help but spill onto the people around her. This light spills onto Calvin from the moment they meet, but he is blind to the new world Ruby hopes to show him. Even Ruby's wisdom and generosity may not be enough to open Calvin's eyes.

What was your inspiration for Letters from Ruby?
They say, "Write what you know," and whoever they are, I took them at their word. Letters from Ruby is a story about a young Episcopal priest (like me, though more neurotic) and his first year of ministry at a church in a former railroad town in West Virginia. The book is fiction, though events from real life inspired the narrative. The woman behind the character of Ruby taught me so much about the "caring" side of ministry. You learn the academics in school -- about interpreting the Bible, preaching, teaching, running worship services -- but learning to be a pastor only happens on the ground.

What is the book about?
Letters from Ruby is about love keeping the grieving afloat. It is about friendship overcoming isolation. It is about hope and trust and the joy of a simple life lived in gratitude. And it is about death and resurrection.

Who's the book written for?
Women my mother's age (I'll let you guess what that means) seem to be gravitating to it, but I think anyone will find value in it. I hope church book clubs pick it up, as it will generate some great discussions at your meetings (there's also a short study guide in the back). You don't need to be an ardent churchgoer to like it; in fact, if you're not one, you might find the characters in this book wrestling with the same questions you are.

How does this book relate to Lent Madness?
Well, it doesn't really, except that there's a killer Ash Wednesday scene in chapter 10.

Why should the Lent Madness faithful buy your book?

Because, presumably, they like church, and my book takes place mostly in a church. Plus, it's good. Also plus, if more than 1,000 of you buy it and then email me a 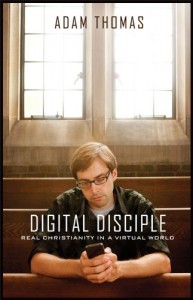 picture of you holding it, Tim Schenck has promised to let me into the Supreme Executive Committee. I know a thousand is a tall order, but I think we can do it!

While Adam is clearly delusional, we hope you'll read his book. Also by Adam is Digital Disciple: Real Christianity in Virtual World. Rumor has it that if you buy both, Adam will fly to your location, at his expense, to autograph them with the pen of your choice.

5 comments on “Back to Lent Month: Letters From Ruby”