No, your eyes don't deceive you. Today's featured Celebrity Blogger looks an awful lot like a former CB named Laura Toepfer. We were going to do a whole separated at birth thing to confuse the Lent Madness faithful but decided to come clean. Laura got married after Lent Madness 2013; hence the name change. So to be clear: Laura Toepfer is Laura Darling.

While the Supreme Executive Committee cannot condone weddings during Lent (or anything else that might distract someone from Lent Madness) we are thrilled for Laura.

Laura Darling, now entering her third year as a battle-hardened Celebrity Blogger, spends half of her time as the Managing Director of Confirm not Conform, an organization devoted to creating confirmation programs that celebrate questions and authentic faith; half of her time as the Director of Spiritual Care and Senior Director of Senior Resources for Episcopal Senior Communities; and the other half of her time with her wife and their three dogs and two cats. After seven years in college, youth, and parish ministry, in 2008 Laura became a Kiva Fellow and worked with microfinance agencies in Uganda before returning to her native California. She preaches regularly throughout the San Francisco Bay Area, and in her rare moments of spare time blogs at The Infusion and tweets @ldarling15. She also has a thing about obituaries. 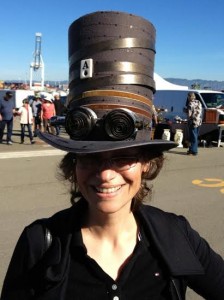 status?
As a heavy-duty tea drinker, the free mugs are an excellent bonus. Especially since the last two Lent Madness mugs have been broken by marauding cats. I hope Frances Perkins proves more hearty. But it’s also really fun to be able to dig into the lives of the saints in a deep way. When you only have 400 words to summarize the life of someone who’s been influential to you and to the life of the church, it’s really tough and I think we all take it very seriously. I do a lot of research and dig into original documents as I am able. (I highly commend the website Project Canterbury as an online resource.) In a way, it’s easier to do the obscure saints because there’s less to find. I pity whoever wrote up Augustine of Hippo – I mean, how do you boil all that information down? But the saints I’ve gotten to write about are people I already cared about as spiritual influences; it’s been a joy to have the opportunity to learn more about them and think about them deeply and to represent them as best I can.

What do you hope the Lent Madness public will learn from the lives of the saints?
That there are lots of different ways to be a witness to God’s love and grace. That it’s not about being a certain type of person or doing a certain type of thing or having a particular kind of personality. That these are real people with foibles and frailties (I’m looking at you, John Wesley), and that Christian Perfection is not about never making mistakes, but that by God’s grace we may, though love, do the work of God in transforming the world.

Someday, when you become the answer on Jeopardy, what will the question be?
Well, I suspect the question will be “Who is Laura Darling?” As to what the answer will be, I have no idea, and I suspect no one will know it. Unless, of course, they are seriously hard core Lent Madness fanatics.