The celebrity parade that is Celebrity Blogger Week continues with second-year participant Megan Castellan. Megan has the distinction of being the only CB to blog from different parts of the country in consecutive years. Last year she was serving in Arizona and this year she calls Kansas City, Missouri, home. This wouldn't be such a big deal except the Supreme Executive Committee was highly inconvenienced having to update Megan's bio. Not that it's all about us, of course. 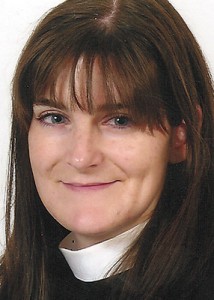 Megan Castellan is Assistant Rector, and Chaplain at St. Paul’s Episcopal Church and Day School, Kansas City, Missouri. She is excited to be one of the few clergy to have a title (ARC) that is also a geometric figure, though why this fact has proved less amusing at parties, she can’t imagine.  Her ongoing adventures and strong opinions are chronicled in her blog Red Shoes, Funny Shirt  and on Twitter @revlucymeg. (She also writes on Mondays for the Episcopal Cafe, though the snark factor is significantly lower there.) In her spare time, she enjoys singing, cooking, being obsessive about television comedy, and marshaling the forces of the Ginger Rescue Squad, otherwise known as her rescue dog and rescue cat.

How has Lent Madness transformed your life?
For each saint I've had the pleasure of writing for, I developed an emotional attachment to that person. It's like we're friends, in a weird, beyond-the-grave, I-have-a-mug-with-your-face sort of way. The communion of saints is real to me in a different way now, and I frequently find myself thinking "What would Oscar Romero do? What would Catherine of Siena do? What would Harriet Tubman do?" And I do attribute the election of Pope Francis to a prayerful threat I made to Archbishop Romero to come see about his church already.

Obviously being a Celebrity Blogger is your greatest lifetime achievement. What perks have you enjoyed as a result 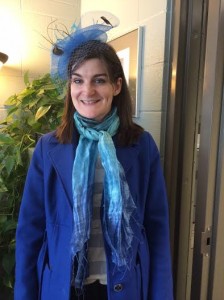 of your status?
My hair is longer, my skin is brighter, my nails are stronger! I get free drinks in bars; children and pets trail after me in the streets! In more provable areas, discovering I was a Celebrity Blogger for Lent Madness caused great excitement when I was being interviewed for my current job, which helped enormously in my discernment process. I have met truly wonderful, funny people across the country, and even in Canada. I even get free mugs. This is the best job ever.

What do you hope the Lent Madness public will learn from the lives of the saints?
The saints are complex, unique characters; there's no one-size-fits-all form of sainthood, there's no one way to be holy or faithful. Some saints excelled at contemplation, and withdrawing from the world. Others were good at charging in, and changing the world from the middle of everything. Some saints had unshakeable faith in God; others were arguing with God every other minute. If you've thought it, struggled with it, or done it, chances are, a saint has, too.

Someday, when you become the answer on Jeopardy, what will the question be?
Answer: "Currently a school chaplain for children ranging in age from 2-14, the youngest ones cannot pronounce her last name, and call her "Chaplain Chocolate" or "Chaplain Quadriceps" instead."