In the first and only Saturday match-up of Lent Madness, we get Dueling Deacons! Alcuin of York vs. Ephrem of Edessa. With the emphasis on diaconal service we can only imagine these two standing around saying “After you.” “No, after you.” Nonetheless, you must decide which of these holy men will move on and which will be left to wallow in the lavabo bowl of defeat.

Yesterday Julia Chester Emery trounced Charles Henry Brent 73% to 27% in the Six-Name Showdown and will go on to face the winner of David of Wales vs. F.D Maurice. Speaking of the bracket, you may not know this but Lent Madness Bracket Czar, Adam Thomas, updates the bracket after each victory. Be sure to click the link, print it out, and/or post it on your living room wall and adore it for 24 hours before tearing it down and putting up the new one. [Please note: The Supreme Executive Committee does not generally condone the killing of trees].

You’ll also notice that underneath the bracket but above the match-up calendar, Adam posts the results and a link to each completed battle. This will come in especially handy in subsequent rounds as saints advance and you want a quick biographical refresher before casting your next vote.

After today’s vote is concluded, the next pairing will be posted on Monday morning as Joseph of Arimathea faces Anna Cooper. Even with a single day off, you may experience a phenomenon known as LMW (Lent Madness Withdrawal). Please stay calm; help is on the way. The “good news” is that we lose an hour of sleep this weekend so Lent Madness will return even sooner than anticipated! 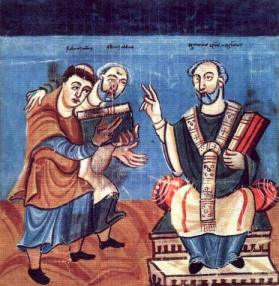 Alcuin of York (735 – 804), deacon and later Abbot of Tours, was a Renaissance man. The Carolingian Renaissance of learning in eighth-century Europe was greatly influenced by him.

Born in Northumbria (England) and educated by a disciple of the Venerable Bede at the cathedral school at York, he became master there, expanding the school into an international center of learning, complete with a fantastic classical library. Charlemagne invited Alcuin to join his Frankish court in 781 and put him in charge of implementing widespread, radical educational reform. Schooling for everyone came under the purview of the church, and Alcuin created a liberal arts curriculum consisting of the trivium (grammar, logic, rhetoric) and the quadrivium (arithmetic, geometry, music, astronomy) primarily to educate clergy, who were then required to establish free schools in their parishes. Alcuin wrote many textbooks for these schools, including a math book of river-crossing problems. Charlemagne, his wife, and sons were among Alcuin’s students.

Alcuin also established scriptoria (places for writing) throughout the empire to copy ancient manuscripts using Carolingian miniscule, a new kind of cursive writing that facilitated faster copying and standardization of letters. He may have developed new punctuation symbols too, including the previously unknown question mark. Given more time, he might have invented the emoticon. Using his techniques, much of ancient Roman literature and Greek mathematical works were thus preserved in a world threatened with destruction from repeated “barbarian” invasions. His significant moral influence over Charlemagne inspired the emperor to eventually abolish his law requiring everyone to be baptized or face execution, reasoning that forcing people into baptism wouldn’t make them Christians.

Alcuin was also a liturgical reformer, revising the lectionary and adapting the Gregorian (Roman/Italian) Sacramentary to include and preserve Gelasian (French/German) liturgies and ancient prayers. This effort expanded official liturgical resources to include saints’ feasts, the blessing of the Easter font, and other prayers, including the Collect for Purity still used today. He also standardized the text of the Vulgate (St. Jerome’s Latin Bible), which had accumulated many scribal errors over 400 years of copying. He continued developing plainchant for use in worship and re-introduced singing the Creed.

Among his theological writings is a celebrated treatise against the heresy of Adoptionism, the belief that Jesus was merely human until his baptism. Alcuin’s many extant letters are important historical sources, and his (admittedly mediocre) poems include a poignant and rather graphic lament on the Viking destruction of the holy monastery at Lindisfarne.

Collect for Alcuin
Almighty God, who in a rude and barbarous age raised up your deacon Alcuin to rekindle the light of learning: Illumine our minds, we pray, that amid the uncertainties and confusions of our own time we may show forth your eternal truth, through Jesus Christ our Lord, who lives and reigns with you and the Holy Spirit, one God, for ever and ever. Amen. 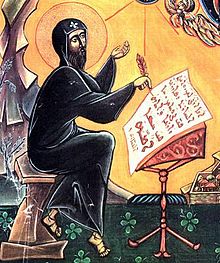 Ephrem of Edessa was a deacon, teacher, prolific poet, and defender of orthodoxy in the fourth-century church of Syria.

He was baptized as a young man and joined a covenanted Christian community in Nisibis. This community was a forerunner to monasticism. The community was a small, urban group committed to service and abstinence. At some point following his baptism, Ephrem was ordained deacon and also formally appointed to the office of teacher, which still holds great distinction for Syriac Christians.

Ephrem is thought to have attended the Council of Nicea with his bishop. He is beloved for his defense of orthodox Christianity through his composition of popular songs, a tactic he learned from the Gnostic opposition, which employed it with great success. These teaching hymns, called madrašê in Syriac, were possibly sung by all-women folk choirs and accompanied by the lyre. We do not know if there was liturgical dance to go with these hymns, but if so, the choreography is thankfully lost in the dustbin of history.

Ephrem’s writings were practical theology intended to instruct Christians during a tumultuous time of conflicting doctrine. He skillfully drew on a multitude of influences, including early Rabbinic Judaism, Greek science and philosophy, and the Persian mystical tradition. Ephrem was so admired and his writings considered so authoritative that Christian authors wrote works in his name for centuries after his death. The best known of these works is the Prayer of Saint Ephrem, still recited during fasting periods in Eastern Christianity today.

In 363, the Roman Emperor was forced to surrender his home city of Nisibis to Persia, and the entire Christian population was expelled. Ephrem moved to Edessa, where he lived for ten years. In his sixties, he succumbed to an epidemic as he ministered to its victims.

Ephrem is often called “The Harp of the Spirit.”

Collect for Ephrem of Edessa
Pour out on us, O Lord, that same Spirit by which your deacon Ephrem rejoiced to proclaim in sacred song the mysteries of faith; and so gladden our hearts that we, like him, may be devoted to you alone; through Jesus Christ our Lord, who lives and reigns with you and the Holy Spirit, one God, now and for ever. Amen.

199 Comments to "Alcuin vs. Ephrem of Edessa"