Today's saintly drama revolves around Egypt. As in "Who will emerge victorious in the holy battle for Egyptian domination." Antony (don't call me Anthony or even Tony for that matter) of Egypt takes on Mary (you can just call me Mary) of Egypt. These two have a lot in common both being hermits and spending much spiritual energy on resisting temptation. Nonetheless, only one will seize the title "Pharaoh of Lent Madness" and make it to the Round of the Saintly Sixteen to square off against Basil the Great.

In yesterday's matchup Anna Cooper bested (upset?) Joseph of Arimathea 60% to 40% which is unfortunate since Joseph already gave away his burial plot.

And if you missed yesterday's exhilarating edition of Monday Madness click here to see Tim and Scott hold forth on all things Lent Madness. As usual it's epic and compelling with high production values. 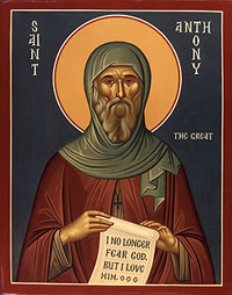 Antony was born in about 251 to wealthy Christian parents in Middle Egypt. When he was not yet twenty years old, his parents died and left their large estate and his young sister to his care. Shortly thereafter, Antony was convicted by Jesus’ words to the rich man to sell everything and give the money to the poor. Antony parceled out his land, giving it away to his neighbors, and sold all his family’s belongings. He gave the money to those who were poor around him, keeping a small portion to provide for him and his sister. A short while later, he heard the gospel command to not worry about tomorrow. He promptly gave away what remained of his money, put his sister in a house of virgins, and took up a life of solitude.

Antony moved to an old tomb and survived on only bread and water, never eating or drinking before sunset, and often fasting for days in between. During this time, he wrestled with demons that assaulted him for his wealth and tempted him with lustful thoughts. He was successful in his resistance, being assured in a vision from God that he had won the victory. Encouraged by this vision, Antony moved further out into the desert.

Antony lived alone for over twenty years. Although he was drawn to the life of a hermit and constantly tried to retreat further into the wilderness, he eventually acquired some renown, and pious men sought to imitate him. Eventually, a sort of monastery was formed, a community of disciples attracted to his lifestyle. The monastery of Saint Antony the Great now stands at that site.

In 311, when the emperor Maximinus began persecuting Christians, Antony went to Alexandria hoping to be martyred. He publicly wore his white habit—the sign of a Christian monastic—and visited Christians in prison and labor camps and testified on their behalf before tribunals. He did not, however, try to impugn himself. In 312, when the persecution ebbed, Antony again returned to the desert and, alone in his cell, committed to become what Saint Athanasius called “a daily martyr to his conscience, ever fighting the battles of faith.” In his old age, Antony participated in the Arian controversy alongside his friend and biographer, Bishop Athanasius. This doctrinal debate claimed that Jesus was subordinate and distinct from God. In 355, Antony was invited to Alexandria to debate the Arians, many of whom were convinced by his arguments and changed their thinking. After the debates, he returned to the desert where he died in 356 at the ripe old age of 105.

Collect for Saint Antony of Egypt
O God, by your Holy Spirit you enabled your servant Antony to withstand the temptations of the world, the flesh, and the devil: Give us grace, with pure hearts and minds, to follow you, the only God; through Jesus Christ our Lord, who lives and reigns with you and the Holy Spirit, one God, for ever and ever. Amen. 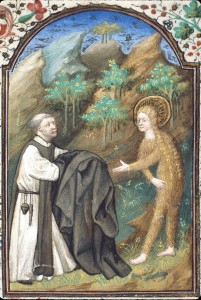 Mary of Egypt is recognized as the patron saint of penitents. This is because of her conversion from life as a sex addict to that of a desert hermit. Her life story or Vita, reportedly first told by Mary to a monk, was later put in writing by Saint Sophronius, the Patriarch of Jerusalem (634-638).

Born in the fourth century in an unknown region of Egypt, Mary ran away to the city of Alexandria at the age of twelve. As a young woman in Alexandria, she lived a life her biographer labeled as public prostitution. Reportedly she often refused payment for sexual acts because of her insatiable desire and instead subsisted mostly by begging and handiwork. Around the age of thirty, she traveled to Jerusalem with a group of pilgrims, hoping to find new sexual partners in the crowds. There she pursued gratification of her desires for a short time. Then, her life changed when she tried to visit the Church of the Holy Sepulchre, the place where Jesus was crucified. But she was unable to pass through the door due to an invisible force.

At this strange occurrence, Mary had an epiphany of sorts and was filled with remorse for her sexual sins. At the sight of an icon of the Virgin Mary, she prayed for forgiveness and renounced her worldly ways. Finding new freedom from her previously insatiable desires, she was able to enter the church. Inside, a voice guided her into the desert. She obeyed, journeying to the monastery of Saint John the Baptist to receive absolution and Holy Communion. Then she crossed the Jordan to live in the desert as a hermit in penitence. She is often depicted in iconography with three loaves of bread, the only food she took into the desert. Once she ate them, she lived off what she could forage in the wilderness.

She lived alone in the desert for forty-seven years, until she met a monk named Zosimus, and told him the story of her life. He agreed to bring her communion on Maundy Thursday of the following year. She appeared to him on the opposite bank of the Jordan River, made the sign of the cross, and walked across the water to receive the body and blood of Christ. She asked him to meet her again one year later, at which time he found her corpse. An inscription told him that she had died shortly after his first visit, though her body was preserved. With the help of a lion, Zosimas dug a grave and buried her. When asked if this was true, Zosimas said, “I’m not lion about any of this!”

Collect for Mary of Egypt
Almighty God, in the early life of Mary, you give us an example of how our incarnate bodies can be sources of both pleasure and destruction. Make us aware of your never-failing love and forgiveness, that we, like her, might love and serve you in body, mind, and spirit. Through Jesus Christ our Savior. Amen.

288 comments on “Antony of Egypt vs. Mary of Egypt”