New this year, we are pleased to offer a brief Opening Ceremony video for Lent Madness. It might not involve a cast of thousands like the Olympics, but it does feature two dead archbishops introducing a true Episcopal celebrity wearing a purple cassock. See, we win!

Isn’t it just “astonishing” how many people have been looking forward to the start of Lent? Isn’t it just “great” that Lent Madness has finally begun? The Supreme Executive Committee has fired the starting gun (don’t worry, it’s metaphorical) and…we’re off! The 2014 Saintly Smackdown has officially commenced.

So, hang onto your halos as we begin whittling down our field of 32 saints. All are worthy (yes, they have already received their respective crowns of glory) yet only one will attain the coveted Golden Halo. There will be debates, ire, angst, rejoicing, and holy trash talking. Just remember, it’s all in the spirit of this season specifically set aside to grow closer to God through our relationship with Jesus Christ. On behalf of the Lent Madness team, we’re delighted you’ve decided to spend some of this holy season with us.

If this is your first year playing Lent Madness, welcome. You’re in for a fun, informative, engaging, occasionally wild, ride. (Looking for a Lent Madness primer? Click here). If you’re back for more heart-stopping saintly thrills, it’s good to see you!

After you vote we encourage you to do three things: First, like us on Facebook. Second, follow us on Twitter (if you just can’t get enough of the Madness, social media is the perfect way to continue the conversation). Finally, visit the Lentorium where you can purchase ebook versions of the Saintly Scorecard: The Definitive Guide to Lent Madness 2014 and other Lent Madness paraphernalia such as mugs. Your hairdresser, local barista, cousin, etc. will be thrilled with such thoughtful and wholly unexpected gifts.

Make sure you watch LentMadnessTV regularly for updates from Archbishops Thomas Cranmer and John Chrysostom, as well as the Supreme Executive Committee. Each week you’ll find a video about that week’s match-ups. Here’s a video about the competition of Ash Week.

P.S. Here’s a Lent Madness “Pro Tip” — if you want to receive all the daily match-ups in your e-mail inbox, we encourage you to go to the home page and “subscribe” by entering your e-mail address (near the top right). This will insure you never miss a vote! 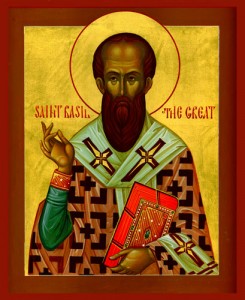 In the early years of Christianity, much of what we take for granted was in flux. Exact points of belief were the source of schism and argument. In the 4th century, one of the great controversies was Arianism, or the belief that Jesus was subordinate to God and was not created with God the Father, but at a later time; therefore, Jesus was distinct from God. The initial Council of Nicea addressed the issue, but the debate would not rest.

In the region of Cappadocia, particularly, the Arian controversy threatened to divide the region. One of the priests in the region, Basil, stepped firmly into the fray.

Basil was one of the three Cappadocian Fathers, three men who, along with their sister Macrina, profoundly influenced Christian orthodoxy in the 4th century. Basil was born into a family of wealth and privilege and educated in the classic Greek style of the era and the Christian faith. When his sister Macrina used her wealth and status to establish a monastery, Basil himself traveled in the area of Mesopotamia and lived the life of a solitary monastic. He soon shifted his interest to a community of faith rooted in prayer and work. Assisted by Gregory of Nazianzus, he  wrote a monastic Rule, which would become the foundation for Eastern monastic discipline.

He retired to a life of monastic living and writing, but was called out of retirement to defend against the heresy of Arianism. Through his intellect, profound and deep faith, and no small amount of political savvy, Basil did just as he was asked. In his On the Holy Spirit, Basil wrote that both the words of Scripture and the traditions of the Church require that the same honor, glory, and worship are to be paid to God, the Son, and the Holy Spirit. For Basil, correct worship would include the formula, “Glory to the Father with the Son together with the Holy Spirit.”

Basil lived what he preached. He never allowed his concern for proper orthodox belief to distract from his focus and work for the poor. He, in his life and after his death through bequests, built homes, hospitals, churches, and other support agencies for the poor and outcasts.

Basil died in 379 at the age of fifty. Two years later, the Second Ecumenical Council affirmed the Nicene faith as understood and presented by Basil and his supporters – the very same words we affirm today in the Nicene Creed.

Collect for Basil the Great
Almighty God, you have revealed to your Church your eternal Being of glorious majesty and perfect love as one God in Trinity of Persons:  Give us grace that, like your bishop Basil of Caesarea, we may continue steadfast in the confession of this faith, and constant in our worship of you, Father, Son, and Holy Spirit; for you live and reign forever and ever. Amen. 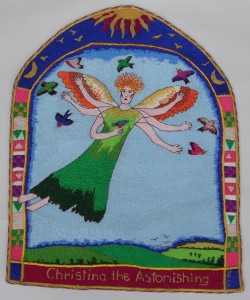 In 1172, in St-Tronde (Belgium), the body of a twenty-something orphan named Christina was brought into church, surrounded by a priest, her sisters, and other mourners, for her funeral mass. After the Agnus Dei, Christina rose from her open coffin and levitated into the rafters, where she perched like a bird as all the mourners except for the priest and one sister fled, amazed.

Christina then came down and told what had happened to her while she was “dead.” Angels had guided her into a dark place where she saw many people she had known, in torment. This was Purgatory. Then she was taken to Hell, where she saw others suffering. Finally, she was taken to Heaven and given this choice: stay in Heaven, or return to earth to make penances for those in Hell and Purgatory, that they might be released; and suffer to convert the living, too.

She chose to return. And, she said, “my life will be astonishing, like nothing you have ever seen.”

Christina, the patron of both the mentally ill and therapists, embarked on a life of extreme behavior. She became homeless, dressed in rags, begging for food. During intense prayer, she threw herself into fiery furnaces or into the frozen river for days, emerging unscathed. She recoiled from human contact and often was found perched in treetops, towers, and other remote places, because the smell of human sin was too much for her.

Her family, thinking her possessed, once had her captured and her leg broken by a thug in an effort to control her. Then they called a doctor. And then Christina escaped.

Yet she lived out her last three years obediently at St Catherine’s Convent where locals — saints, counts, villagers — came to her for counsel and confession. She died in 1224 at the age of 74.

In addition to being immortalized in plays, poems, and a song by Nick Cave and the Bad Seeds, Christina’s original story was written down by a contemporary, Thomas de Cantimpre, a Belgian Dominican, based on eyewitness accounts from villagers and Cardinal Jaques de Vitry, who knew Christina. This astonishing woman was a great puzzle to everyone, who were never sure if she was a mystic or insane. Perhaps she was shattered by an encounter with the Divine.

She herself was convinced she was called to suffer for others, to be a different kind of witness. And that she was.

** Image of Christina the Astonishing by Cookie Scottorn. Used with permission.

Collect for Christina the Astonishing
Eternal God, in the example of Christina, we are reminded of the fine line between mysticism and mental illness. You gave to her a passionate spirit, a vivid mind, and the call to suffer for others. Through her example, may we be awakened to passionate and compassionate witness to your glory. In the name of Jesus Christ, who lives and reigns with you and the Holy Spirit, one God, for ever and ever. Amen.

Vote! (Only once per person!)

Basil the Great vs. Christina the Astonishing

283 Comments to "Basil the Great vs. Christina the Astonishing"