If your name happens to be Catherine (or Katherine or Cate or Katy or even Katharine -- like  a certain Presiding Bishop of a certain mainline denomination) this is your day. No matter which Catherine emerges victorious -- of Alexandria or of Siena -- you win! Of course after 24 hours one Catherine will be discarded onto the Lent Madness heap of irrelevance. But that's okay because this is your special day!

In yesterday's action, Lydia defeated Moses the Black 60% to 40% and will advance to face the winner of Nicholas Ridley vs. John of the Cross.

And if for some (inexcusable) reason, you missed yesterday's edition of Monday Madness with Tim and Scott, you can watch it here. Basically we DVR it for you so you can watch in peace without pesky commercial interruptions for saintly products like St. John's Wort or Yves Saint Laurent. 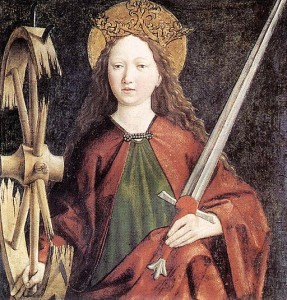 Many legends surround the life and death of Catherine of Alexandria. Tradition tells us Catherine was born at the end of the third century to Roman rulers in Alexandria, Egypt. An incredibly beautiful and intelligent woman, with every privilege at her disposal, Catherine excelled in her studies and developed renown for her ability in the arts and sciences, especially philosophy. As a young woman, she converted to Christianity after a vision of the Blessed Virgin Mary giving her in mystical marriage to Christ.

Some years later, during the persecution under the Roman Emperor Maxentius, Catherine scolded the vicious ruler for killing Christians and for his own idolatry. In response Maxentius gathered together fifty philosophers to engage her in debate. Impressed by her erudition and the force of her arguments, the philosophers converted to Christianity and were summarily burned alive by the humiliated despot. Maxentius jailed Catherine for her insolence. While she was in jail, Maxentius offered to release Catherine if she would marry him. She refused, claiming that she was married to Christ. Later, Catherine converted many in his household, including his wife. The furious hegemon executed his wife and 200 servants and condemned Catherine to death.

The executioners put her to the spiked wheel, but at her touch the wheel shattered and instead killed many of her assailants. Maxentius commanded his soldiers to behead Catherine. When the blade sliced through her neck, milk, not blood, flowed. Legend has it that her body was taken by angels to the Sacred and Imperial Monastery of the God-Trodden Mount of Sinai, which today is commonly referred to as Saint Catherine’s Monastery. Perhaps not coincidentally, this is the same monastery that until the late nineteenth century housed one of the oldest, complete manuscripts of the Bible, the Codex Sinaiticus.

Saint Catherine of the Wheel, as she is sometimes called, was for centuries an important saint in popular piety. She appeared to Joan of Arc, who believed Catherine had been appointed as her advisor. Today she is seen as a patroness to philosophers, girls, librarians, and ironically, people who work with wheels (such as potters, spinners, and mechanics).

Collect for Catherine of Alexandria
O God, by your Holy Spirit you give to some the word of wisdom, to others the word of knowledge, and to others the word of faith: We praise your Name for the gifts of grace manifested in your servant Catherine, and we pray that your Church may never be destitute of such gifts; through Jesus Christ our Lord, who with you and the Holy Spirit lives and reigns, one God, for ever and ever. Amen. 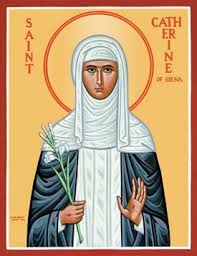 Catherine of Siena is one of the foremost mystics, reformers, and politicians of all saintly history. Born Caterina di Giacomo di Benincasa on March 25, 1347, she was five or six years old when she had her first vision and seven when she vowed to give her life to Christ.

But before she could take any vows, her older sister, Bonaventura, died in childbirth, and her parents wanted her to marry the widower. Catherine said no. She stopped eating and chopped off her hair (in order to thwart her mother’s wishes that she look attractive in order to catch a husband). Successfully staving off marriage, Catherine basically formed a one-woman Dominican order, living an active, prayerful life devoted to quiet service to the poor, while still living with her family.

This irritated her parents, but Catherine was immovable, especially after receiving an encouraging vision from Saint Dominic. Eventually, she prevailed on her parents to let her join a tertiary order of the Dominicans; she remained in quiet contemplation and service to the local community until she was about 21.

Then, there was a turning point. Catherine had a vision of a “mystical marriage” to Christ, and an overpowering sense of God’s love and closeness to all creation. This vision compelled her to join public life and leave her life of solitude.

No longer content to live quietly at home, Catherine became more involved in aiding people, not just through charity but through politics and advocacy. She gained a reputation for wisdom, fairness, and mercy, and her opinion was widely sought. She travelled around northern Italy, advocating for clerical reform and renewal of the church in every place, asking that people themselves, as well as the institution, renew the Body of Christ through the “total love of God.” She organized against the anti-pope—an illegitimately elected rival pope. Catherine urged Pope Gregory XI not to give in to schism but to move the papacy back to Rome from Avignon. She badgered Gregory with letters until he eventually gave in. We might say the squeaky wheel gets the grease, if this didn’t appear to be an endorsement of Catherine of Alexandria.

Pope Gregory XI came to rely on Catherine so much that he sent her as a peace emissary to the warring states of Florence and Rome. Gregory unexpectedly died soon after Catherine arrived in Rome, and riots broke out. In the ensuing chaos, Catherine was nearly assassinated. But she was undeterred and achieved a peace deal a few months later.

The new Roman pope was a fan as well, and Urban VI soon brought her to the papal court in Rome to be his personal adviser. She helped calm the waters during the Western Schism—a split within the Roman church with rival popes claiming to be the true leader. She argued for the legitimacy of Urban in Rome until her death at age thirty-three of a stroke.

Collect for Catherine of Siena
Everlasting God, you so kindled the flame of holy love in the heart of blessed Catherine of Siena, as she meditated on the passion of your Son our Savior, that she devoted her life to the poor and the sick, and to the peace and unity of the Church: Grant that we also may share in the mystery of Christ’s death, and rejoice in the revelation of his glory; who lives and reigns with you and the Holy Spirit, one God, now and for ever. Amen.