With their life spans overlapping by 20 years, today's battle sees F.D. Maurice take on Julia Chester Emery as both vie to advance to the next round. The pairing of contemporaries in Lent Madness is rare (unless they happen to be siblings) so there's that. They're also closely identified with initials: "F.D." Maurice and Julia Chester "ECW" Emery. So there's that as well.

Yesterday, Antony of Egypt failed miserably in his attempt to turn Basil the Great into pesto. Lent Madness bracketologists have determined that the loss was one of historic proportions; the worst drubbing in the history of Lent Madness -- 87% to 13%. Ouch. Basil becomes the first saint of 2014 to make it into the Elate Eight where he'll face the winner of Lydia vs. John of the Cross.

It's hard to believe we've made it through another week of the Madness! After a quick breather, we'll be back bright and early on Monday morning with Harriet Beecher Stowe tangling with Alcuin. If you encounter a Celebrity Blogger on your travels this weekend, be sure to ask for his or her autograph. It's very affirming and helps make up for the severe lack of monetary compensation. 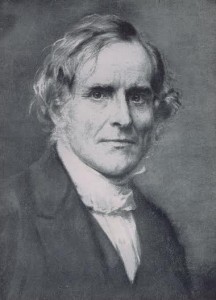 Frederick Dennison Maurice (1805-1872) was among the foremost theologians of 19th century England, who held as his foremost theological and practical cause the advancement of the Kingdom of Christ. This primary conviction led him to serve as a theological forerunner to modern ecumenical movement, and to deeply involve himself in social reforms of the time with the foundation of the Christian Socialist movement. His ideas and activism often led him into conflict with religious authorities of the day; he persisted nonetheless. Contrary to some assertions, he was not called Maurice for his speaking of the pompatus of love.*

On the church present and active:

We have been dosing our people with religion when what they want is not this but the Living God…we give them a stone for bread, systems for realities. -- As quoted in Life of F.D. Maurice (1885)

On the union of all of heaven and earth in the Kingdom of Christ:

All stages of our earthly life to the last are consecrated; so every beautiful spot in nature as well as all the forms of art share in the same consecration, and have that one name of ‘Father’ illuminating them all. -- from Sermons Preached in Country Churches

Christ is with those who seem to speak the most slightingly of him, testifying to them that he is risen indeed, and they have a life in him which no speculations or denials of theirs have been able to rob them of, even as we have a life in him, which our sins often hinder us from acknowledging, but cannot quench. -- from Theological Essays (1853)

On Relationships in Humanity and in God:

Human relationships are not artificial types of something divine, but are actually the means and the only means, through which man ascends to any knowledge of the divine… every breach of human relation, as it implies a violation of the higher law, so also is a hindrance and barrier to the perception of that higher law – the drawing of a veil between the spirit of a man and his God. – from The Kingdom of Christ (1838)

On the Liturgy and the Work of the Church:

I hope you will never hear from me such phrases as ‘our incomparable liturgy’: I do not think we are to praise the liturgy but to use it. When we do not want it for our life, we may begin to talk of it as a beautiful composition. Thanks be to God, it does not remind us of its own merits when it is bidding us draw near to him. -- As quoted in Life of F.D. Maurice (1885)

*41-year old Pop Cultural Reference. If you don’t get it, ask your parents, or Google it. 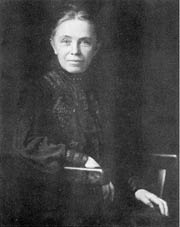 Julia Chester Emery (1852-1922) was for 40 years the national secretary of the Women’s Auxiliary of the Episcopal Church. She came from an unusual family: her father Charles was a sea captain and Episcopalian, and he and her mother Susan encouraged all of their eleven children not only to be personally pious but to actively work to further the kingdom of God. Two of her brothers were priests, and Julia and three of her sisters were missionaries or supported missionaries in the manner of Phoebe, whom Paul mentioned in the Letter to the Romans as a deacon and servant/helper to many in the church, and whom Susan Emery held up as an example to her daughters.

She was also a cousin to the four Emery sisters who were patrons of the Society of St. John the Evangelist (SSJE), the Episcopal monastic community which now offers retreat space at Emery House in Newbury, MA.

Julia visited every single diocese in the United States and helped organize branches of the Women’s Auxiliary in more than 5,600 parishes. Many of these branches continue today as the Episcopal Church Women, or ECW.

She wrote: “There are hundreds more earnest, faithful, devoted women who would be cheered if only they knew what is being done by their sisters in the church and see their offering, small and insignificant as it seems, increased and multiplied by the union with the gifts of others” (Spirit of Missions, volume XXXVII, 1872).

Emery led the charge for canonical status for the office of deaconess. She also created the United Thank Offering, represented by small blue boxes with slots for coins to encourage daily giving and thanks to God. The UTO is still under the purview of the ECW, having awarded $1,517,280 in mission grants in 2012.

Apparently, her only training for this ministry was a willingness to try it, for she possessed no special education or preparation. Her only authority was collegial, for being a lay woman, she had neither the office nor the perquisites of ordained status to buttress her leadership. Julia Emery reminds us that we all possess the resources we need to be effective missionaries, except perhaps the two most important qualities exemplified in her — a willingness to try and the commitment to stick with it, even for a lifetime. (Brightest and Best: A Companion to the Lesser Feasts and Fasts by Sam Portaro.)

Known as “Miss Julia,” Emery died in 1922 and is buried in the cemetery of St. James the Less in Scarsdale, New York, a cemetery that also contains a secret room and tunnel that was part of the underground railroad through which slaves were able to escape to Canada.