You know what's great about today? (Well, besides the fact that it's Monday and a lot of clergy -- and half of the Supreme Executive Committee -- have the day off). We begin an entire week of Saintly Sixteen match-ups! We kick things off with a 19th century laywoman taking on an 8th century deacon. Harriet Beecher Stowe and Alcuin vie for a spot in the Elate Eight.

If you missed the Archbishops' preview of the week ahead, click here. And then subscribe to Lent Madness by entering your e-mail address (on the right side of the home page under the Voting 101 video) so you never miss anything pertaining to Lent Madness ever again. Why get caught at a loss for words around the water cooler when your co-workers ask how you voted  yesterday and you tell them you forgot? If your boss hears of your total disregard for Lent Madness you may even lose your job. So please. Subscribe to Lent Madness. The global economy is depending on you. 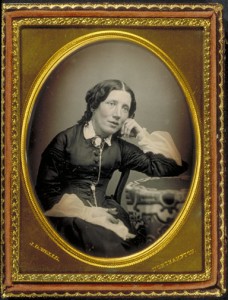 Harriet Beecher Stowe, author of Uncle Tom's Cabin, or Life among the Lowly, got an early start in her literary career. When she was 13, she graduated from the local girls' school in Litchfield, Connecticut. Her composition, entitled, "Can the immortality of the soul be proved by the light of nature?" was read aloud at the ceremony. Her father, Lyman Beecher, at the time the most famous preacher in the country, wanted to know who the smart aleck was, and was shocked to learn it was his daughter. Harriet was thrilled with herself.

Initially content to stay out of the argument over slavery in the mid-1800s, two events changed Harriet's mind. The first was the death of her 18-month-old son, in the Cincinnati cholera epidemic of 1849. Cholera was new to the United States at the time, so there was no medical treatment. Afterwards, Harriet wrote that she didn't think she could ever be reconciled to the child's death, unless it allowed her to do some great good for others -- but that the loss also helped her empathize with slave mothers who lost their children on the auction block.

When the Fugitive Slave Law was passed the next year, directly implicating even those in Northern states in the institution of slavery, Harriet knew she needed to do something. She said later: "I no more thought of style or literary excellence than the mother who rushes into the street and cries for help to save her children from a burning house, thinks of the teachings of the rhetorician or the elocutionist."

She approached the editor of the anti-slavery paper, the National Era, proposing that she write three or four short sketches, which grew into a serialized form of Uncle Tom's Cabin.

The intense popularity of the book enraged the slaveholding establishment, causing them to accuse Harriet of fabrication and lying through her teeth, but Harriet was prepared. She published A Key to Uncle Tom's Cabin, in 1854, in which she directed her white audience to the numerous slave narratives that she had used in her research for her novel, essentially arguing that, if she had lied, it had been to tone down the horrible truth about slavery. It had the added benefit of bringing the first-person slave narratives of Solomon Northrup (of “12 Years a Slave” fame), Frederick Douglass, and many others, to a wider audience.

"What makes saintliness in my view, as distinguished from ordinary goodness, is a certain quality of magnanimity and greatness of soul that brings life within the circle of the heroic," she wrote. Very appropriate for such a feisty character. 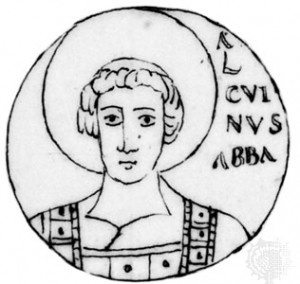 This quirky 8th Century teacher, theologian, liturgist, and bad poet was responsible for the Christian-based European renaissance that went hand-in-hand with the reign of Charlemagne, a program that was especially focused on educating the clergy so they could educate the people. One of his most notable achievements was to convince Charlemagne that forcing people to accept baptism or be executed was not good Christian policy.

He was also the inventor of the Carolingian miniscule, a form of writing that allowed so many ancient texts to be quickly and clearly reproduced. He may even have been the inventor of the question mark, which, in addition to inspiring the 60’s band ? & The Mysterians to challenge us all to cry 96 tears, was prominently featured in his discourses and other teaching documents.

Here is such an example, a discourse between Pippin, Charlemagne’s son, and Alcuin:

P. What is life?
A. A delight to the blessed, a grief to the unhappy, an experience of waiting for death.
P. What is death?
A. An inevitable happening, an unpredictable journey, the tears of the living, the coming into force of a testament, the robber of human beings.
P. What is a human being?
A. A slave to death, a traveller passing through, a stranger in the place.
P. To what is a human being similar?
A. To a fruit tree.
P. What is his or her situation?
A. Like that of a candle in the wind. (translated by Gillian Spraggs)

Alcuin wrote many textbooks, including the Propositions for Sharpening Youth that included problems like this one:

A certain  man needed  to take  a wolf,  a she-goat, and a  load of cabbage across a  river. However, he could only find a boat which would carry two of these  [at a  time]. Thus, what rule did he employ so as to get all of them across unharmed? (Translated from the Latin by Peter J. Burkholder) (Post your answer in the comments!)

His Bible translation (an update of Jerome’s Vulgate combined with the Northumbrian Ceolfrith Bible) was produced in volumes that contained both illumination (sometimes with gold letters on purple vellum) and illustration and text arranged in cartoon-strip-like registers, thus bringing the Irish tradition of illuminated Gospels to the European continent.

Toward the end of his life, he wrote this about his career:

In the morning, at the height of my powers, I sowed the seed in Britain, now in the evening when my blood is growing cold I am still sowing in France, hoping both will grow, by the grace of God, giving some the honey of the holy scriptures, making others drunk on the old wine of ancient learning…