Gregory the Illuminator vs. Brendan the Navigator

And thus it all begins: Ash Thursday is finally upon us. Hang onto your halos as we start "navigating" the bracket and "illuminating" the lives of 32 saints throughout this Lenten season. All are worthy (yes, they have already received their respective crowns of glory) yet only one will attain the coveted Golden Halo.

Along the way there will be debates, ire, angst, rejoicing, and holy trash talking. Just remember, it’s all in the spirit of this season specifically set aside to grow closer to God through our relationship with Jesus Christ. On behalf of the entire Lent Madness team, we’re delighted you’ve decided to spend some of this holy season with us.

If this is your first year playing Lent Madness, welcome! You’re in for a fun, informative, engaging, occasionally wild, ride. (Looking for a how-to-vote primer? Click here). If you’re back for more heart-stopping saintly thrills, it’s good to see you!

After you vote, the Supreme Executive Committee of Lent Madness encourages you to do three things: First, like us on Facebook. Second, follow us on Twitter (if you just can’t get enough of the Madness, social media is the perfect way to continue the conversation). Finally, visit the Lentorium where you can purchase ebook versions of the Saintly Scorecard: The Definitive Guide to Lent Madness 2015 and other Lent Madness paraphernalia such as mugs, Bracket Posters, and Golden Halo Flying Discs. Perhaps you'd like to be among the first to wear a Purple Lent Madness T-Shirt, available starting today in small, medium, large, extra-large, and double-extra-large. You can play Lenty Claus by donning a purple hat and presenting Lenten gifts to your cat groomer, local barista, long-lost cousin, etc. -- they will be thrilled with such thoughtful and wholly unexpected gifts.

P.S. Here’s a Lent Madness “Pro Tip” — if you want to receive all the daily match-ups in your e-mail inbox, we encourage you to go to the home page and “subscribe” by entering your e-mail address (near the top right). This will ensure you never miss a vote! 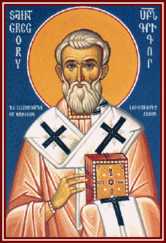 Gregory the Illuminator, the patron saint of the Armenian Christian Church, was the first person to bring Christianity to Armenia. Born in 257, Gregory’s work as a teacher and missionary was key in making Armenia the first nation to embrace Christianity as its official religion. Situated between the empires of Rome and Parthia (present-day Iran), Armenia was at the center of a power struggle between the two nations and struggled to maintain peaceful relations within and outside its borders.

Legend says that Gregory’s father assassinated the king of Parthia, and as a result, his family was forced into hiding. Gregory’s family sent the young boy to Cappadocia, where the Christian Holy Father Phirmilianos provided instruction in the classical traditions and Christian faith. While under his tutelage, Gregory converted to Christianity, and soon after, he married Miriam, a fellow Christian and the daughter of an Armenian prince. They had two sons together before separating so that Gregory could become a monk, and his wife could become a nun. This may be one of the earliest examples we have of “consciously uncoupling.”

Gregory’s call to monasticism, however, was challenged when the Armenian king discovered Gregory’s location and sought to exact revenge on behalf of his murdered father. Gregory spent twelve years in prison, where he remained committed to his faith and devotional life. The king, Tridates III, finally agreed to release Gregory with the expectation that he could provide peace, wisdom, and stability to the king, who some said had become “like a wild boar” after the Roman Empire had overtaken portions of the Parthian Empire. Tridates eventually converted to Christianity under Gregory’s tutelage, and in 301, Tridates declared Christianity the nation’s official religion and commissioned Gregory to officially spread the gospel across the country.

Despite his call as a missionary and later bishop of the Armenian National Church, Gregory favored the silence of the monastic life. In 318 his son assumed leadership of the Church, and Gregory resumed his life as a hermit until his death in 332 at the age of seventy-four.

Today, we remember Gregory as an “apostle to Armenia” and a faithful example of prayer, devotion, and leadership. He is referred to as the “illuminator” because he brought the light of Christ to the people of Armenia.

Collect for Gregory the Illuminator

Almighty God, whose will it is to be glorified in your saints, and who raised up your servant Gregory the Illuminator to be a light in the world, and to preach the Gospel to the people of Armenia: Shine, we pray, in our hearts, that we also in our generation may show forth your praise, who called us out of darkness into your marvelous light; through Jesus Christ our Lord, who lives and reigns with you and the Holy Spirit, one God, now and for ever. Amen. 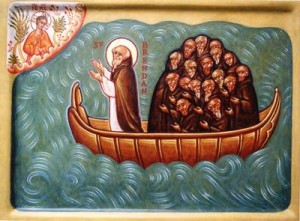 Brendan of Kerry, the Navigator, lived and ministered in Ireland in the sixth century. A disciple of Saint Finian, Brendan is one of the twelve apostles of Ireland. Brendan was born in 484 and lived a long life full of adventure. He earned his title of “Navigator” traversing the British Isles, founding monasteries in Ireland, Scotland, Wales, and Brittany. After a sixty-five-year ministry, he died at age ninety-four, still praising Jesus and bragging about never stopping to ask for directions.

Saint Brendan is best known for his fabulous sea quest in which he sought the Land of Promise. When he was eighty years old, Brendan’s wanderlust led him to seek the legendary land across the Atlantic Ocean. The story of his journey is found in several ancient works, including the Irish Life of St. Brendan, Latin Fragments of the Life of St. Brendan, and The Voyage of St. Brendan. The works share many literary connections to other Irish sea voyage tales.

The tales are fantastic, with visions of hell, spectacular sea creatures, and encounters with odd island inhabitants (perhaps the oddest being a meeting with Judas Iscariot, condemned to a rock in the middle of the Atlantic). Brendan’s journeys and the description of the mythical Island of Promise (also called Saint Brendan’s Isle) were known by and an inspiration to Christopher Columbus on his voyage across the ocean some nine hundred years later.

Some argue that Brendan actually did successfully traverse the Atlantic Ocean. The geographical descriptions found in the Voyage match features of Iceland, Newfoundland, and Florida. If Brendan did not make the trip himself, it appears that someone in the sixth century had intimate knowledge of the land, flora, and fauna of these areas. Whatever the historicity of his adventures, Saint Brendan lived a long life in service to God, committed to building communities of faith.

Collect for Brendan the Navigator

O God, you have brought us near to an innumerable company of angels, and to the spirits of just people made perfect: Grant us during our earthly pilgrimage to abide in their fellowship, and in our heavenly country to become partakers of their joy; through Jesus Christ our Lord, who lives and reigns with you and the Holy Spirit, one God, now and for ever. Amen.

Gregory the Illuminator vs. Brendan the Navigator