Ah, a battle between an Archbishop of Canterbury and a king. That seems rather familiar. But the real question is, which island will emerge victorious in this matchup between William Laud and Kamehameha? England or Hawaii? Whoever it is, the winner will advance to face David Oakerhater in the next round.

Yesterday’s battle between Thecla and John Keble led to some respectfully passionate debate in the comment section. In fact, we set a record for most comments in a first round pairing with over 300. Impressive! In the end, Thecla prevailed 58% to 42% meaning we’ll be hearing more about those ravenous seals in the Saintly Sixteen when she squares off against Brendan the Navigator. 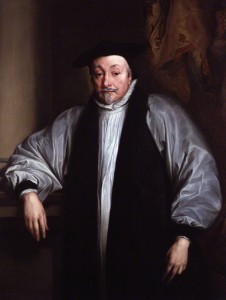 William Laud was Archbishop of Canterbury from 1633–1640 and remains among the most controversial figures in the history of Anglicanism. Heralded by many as a martyr and condemned by others as a tyrant and bigot, Laud was among the most visible proponents of a uniquely English brand of anti-Calvinism in the seventeenth-century Church. As such, he was in near constant conflict with English Puritans of his day.

Even before his elevation to the See of Canterbury, Laud was somewhat of a liturgical and ecclesiastical innovator. During his term as dean of Gloucester, he caused great consternation (as so many priests throughout the ages have) by moving furniture. Laud moved the altar table in Gloucester to the east wall — the location typical of most altars before the Reformation. This move brought upon him the ire of his bishop and local Puritans, suspicious of a reintroduction of a Roman Catholic custom.

Laud’s movement of the altar was a liturgical manifestation of his theological persuasion that the Church of England followed in unbroken succession from the pre-Reformation Roman Catholic Church in England, although under the supreme governance of the king and the oversight of bishops. This belief led him to stridently impose liturgical uniformity throughout the church, seeking that all things be done “decently and in good order” in the “beauty of holiness.” His increased emphasis on the celebration of the sacraments was often viewed as contrary to Reformation doctrines of salvation through faith alone. An abortive attempt to impose The Book of Common Prayer on Scotland in 1637 marked the apex of his time as Archbishop of Canterbur y. By 1638 Scottish leaders pledged to resist the new prayer book and uphold Puritan practice by force, and by the end of the year, no bishops remained in Scotland.

Laud was sincere in his beliefs but dangerously out of touch with common persuasions in England of his time. His fierce defense of the Church’s privileges and prerogatives came at the same time as a growing sentiment against the divine right of kings, and his strident rule as Archbishop of Canterbury in favor of liturgical uniformity won him few friends. By 1641 he was impeached and carried away to theTower of London.

He was sentenced to death in 1645. At his execution, he said, “The Lord receive my soul, and have mercy upon me, and bless this kingdom with peace and charity, that there may not be this effusion of Christian blood amongst them.”

Keep us, O Lord, constant in faith and zealous in witness, that, like your servant William Laud, we may live in your fear, die in your favor, and rest in your peace; for the sake of Jesus Christ your Son our Lord, who lives and reigns with you and the Holy Spirit, one God, for ever and ever. Amen. 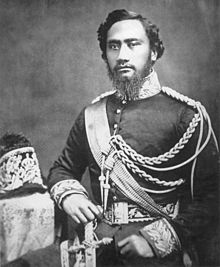 With his wife Queen Emma, Kamehameha set forth to transform the Hawaiian islands by offering his people a new way, new healthcare methods, and a new faith — Christianity.

Kamehameha was born on February 9, 1834. As a young man, he toured the United States, Central America, and Europe, and he discovered Christianity — and Anglicanism in particular. He was taken with the liturgy and core beliefs of Anglicanism. In 1860 Kamehameha and Emma petitioned the Church of England to send Anglican missionaries to Hawaii. Three priests arrived on October 11, 1862. Kamehameha initiated one of his greatest contributions to his people — translating The Book of Common Prayer into the native language. He led his people as a practicing, dedicated Anglican and began a building campaign for a cathedral and a school.

A devastating smallpox epidemic in the Islands prompted Kamehameha and Emma to go into the communities and witness firsthand the devastation from leprosy, influenza, and other foreign diseases that were spreading through the native population. They embarked on a fundraising campaign to build a new hospital, and even today, their commitment to the health of their people is evident. Queen’s Hospital is named for Emma.

Kamehameha’s death on November 30, 1863, didn’t stop the work and ministry that was underway. Emma continued her husband’s dedication and charity by establishing more schools and churches and by tending to the sick and poor.

Although Kamehameha died a young man, the impacts of his Christian ideals and dedicated work on Hawaii are still witnessed today. Kamehameha and Emma are honored throughout Hawaii and are depicted in stained glass windows at St. Andrew’s, the church they helped found.

His feast day is celebrated in conjunction with his wife, Queen Emma, on November 28.

O Sovereign God, who raised up Kamehameha and Emma to be rulers in Hawaii, and inspired and enabled them to be diligent in good works for the welfare of their people and the good of your Church: Receive our thanks for their witness to the Gospel; and grant that we, with them, may attain to the crown of glory that never fades away; through Jesus Christ our Savior and Redeemer, who with you and the Holy Spirit lives and reigns, one God, for ever and ever. Amen.

Posted in First Round, Lent Madness 2015

266 Comments to "William Laud vs. Kamehameha"