It's here, it's here! No, not the final battle of the First Round -- though that's an important milestone in Lent Madness 2015. But  the matchup everyone's been talking about (or at least Tim and Scott) since the inception of the bracket: Barbie vs. Ken! The 3rd century saint vs. the 17th century English bishop and hymn writer. The winner will face Egeria and the matchups for the Saintly Sixteen will be complete. View the complete (and updated daily) bracket here.

Yesterday, South African missionary and martyr Bernard Mizecki was able to accomplish something that a dragon could not: vanquish Margaret of Antioch. With a 57% to 43% margin of victory, Bernard advances to the Saintly Sixteeen where he will square off against Jackson Kemper.

Enjoy this last matchup of the Round of 32 and gird your loins for tomorrow's start of the Saintly Sixteen as Brendan the Navigator faces Thecla. 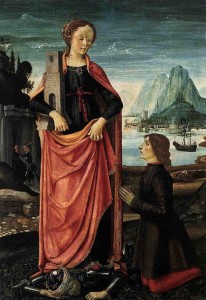 Barbara is one of the fourteen Auxiliary Saints. Her story is difficult to reconstruct due to inconsistencies and obvious embellishments. She maintains her place on the Roman Catholic and Anglican lists of saints.

Barbara was born in the third century in either Heliopolis in Syria (or possibly in modern-day Egypt) or Nicomedia in Asia Minor (modern-day Turkey) to a wealthy pagan family. After the death of Barbara’s mother, her father was worried for her safety so he built a large tower to protect her and her virginity.

A traveling physician introduced Barbara to Christianity during one of her father’s extended absences. She believed the message and was baptized. While her father was away, she hired workmen to construct a third window in her tower to represent the Trinity. She also used her finger to etch a cross upon the wall. Upon her father’s return, Barbara explained the significance of the windows and told him of her newfound faith. Her father (in a rage) intended to give her over to the authorities, but she was miraculously whisked away to a mountain gorge. Her father pursued her and found a shepherd who refused to reveal her whereabouts. He eventually encountered another shepherd who betrayed her hiding place.

Her abuse at the hands of her father and the authorities was marked by many miraculous happenings. She was tortured mercilessly but every night her wounds healed while she was in her cell. The torches that were intended to burn her were miraculously extinguished before they could touch her flesh. At last she was dragged out naked to be paraded around the town with another martyr, Juliana. An angel was sent to cover their nakedness.

She was finally condemned to be beheaded. Her father requested that he be the one to strike the blow. On his way home after committing the dastardly deed, he was struck dead by a bolt of lightning. Because Barbara is associated with lightning, she has become the patron saint of firefighters, soldiers, and gunsmiths.

Collect for Barbara
Almighty God, by whose grace and power your holy martyr Saint Barbara triumphed over suffering and was faithful even to death: Grant us, who now remember her in thanksgiving, to be so faithful in our witness to you in this world, that we may receive with her the crown of life; through Jesus Christ our Lord, who lives and reigns with you and the Holy Spirit, one God, for ever and ever. Amen. 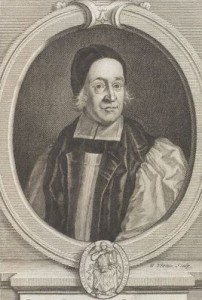 Born in 1637 and ordained in 1661, Thomas Ken was a bishop, hymn writer, author, royal chaplain to Charles II of England, and one of seven bishops who (in 1688) opposed James II’s Declaration of Indulgence, which was designed to promote Roman Catholicism.

In 1663 Ken became rector of Little Easton, Essex, then rector of East Woodhay, Hampshire, and presbyter of Winchester in 1669. He published A Manual of Prayers for use at Winchester College in 1674.

Perhaps no story sums up the moxie of Thomas Ken as Royal Chaplain more than an exchange he had with King Charles II. Ken was asked by the king to cover up an indelicate matter. Charles requested that his consort (Nell Gwyn) be allowed to lodge with the chaplain so as to cover the king’s indiscretions. Rather than assent, Ken replied that it was “not suitable that the Royal Chaplain should double as the Royal Pimp.” King Charles admired Ken’s forthrightness. Later, when the See of Bath and Wells came open, Charles insisted Ken be elevated to the episcopal throne, saying, “None shall have it but that little man who refused lodging to poor Nellie!”

Ken was a famed preacher and even royalty begged for seats when he was preaching. His force of character and faith caused him great difficulty when King James II ascended the throne. He was one of several bishops imprisoned in the Tower of London for refusing to sign the Declaration of Indulgence. He was later acquitted.

Despite this, Ken remained loyal to James through the so-called Glorious Revolution of William of Orange and his consort Mary. William and Mary demanded oaths of allegiance from all bishops. Thomas Ken and others (known as the Non-Jurors — the older meaning of “juror” is “one who takes an oath,” hence “perjurer” as “one who swears falsely”) refused to take the oath. This loyalty cost Ken his episcopacy. He was deprived of his See in 1691 and spent the subsequent twenty years of his life in retirement. Ken’s legacy remains strong and is given voice throughout churches all over the world when they sing “Praise God from whom all blessings flow,” which Ken wrote as a setting for the Doxology.

Collect for Thomas Ken
Almighty God, you gave your servant Thomas Ken grace and courage to bear witness to the truth before rulers and kings: Give us strength also that, following his example, we may constantly defend what is right, boldly reprove what is evil, and patiently suffer for the truth’s sake; through Jesus Christ our Lord, who lives and reigns with you and the Holy Spirit, one God, for ever and ever. Amen.

238 comments on “Barbara vs. Thomas Ken”