No, this is not a green-themed story connected with St. Patrick's Day, because who would want to read about a saint who was driven out the Round of 32 in Lent Madness 2011? This is a story about good old American green currency.

The Supreme Executive Committee has just learned that Frances Perkins, winner of the 2013 Golden Halo, continues to leverage her newfound fame. She is among the short list of women who could grace the $20 bill!

As reported in the Boothbay Register, there is a growing movement to put a woman on the American $20 bill. If you think a Maine newspaper might be biased toward their local hero, the New Yorker has the skinny too. Of course, we at Lent Madness would be happy to see Andrew Jackson (or anyone else for that matter) get tossed aside in favor of a Golden Halo winner. In fact, rumor has it that a number of Lent Madness fanatics have initiated a grass roots campaign to get Mary Magdalene on the nickel.

But what can you, the Lent Madness public, do to help Frances "cash in?" You can do the thing that you have been expert at doing. You can vote. The website Women on 20s is running a contest to collect votes for a recommended choice. Head over there and vote right now. 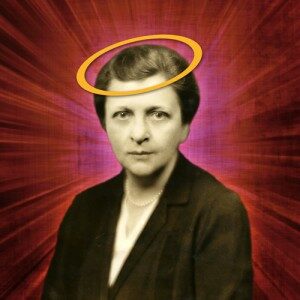 We're pretty sure if Frances Perkins is chosen, they'll want her depicted wearing her coveted Golden Halo. And then it's only one step until we're looking at a purple note including the Lent Madness URL. C'mon folks, we're within range. Vote for Frances Perkins. You did it before, now do it again.

NOTE: The SEC does not accept bribes to get your favorite saint into next year's bracket. Whatever you do, please do not attempt to bribe them with small, unmarked saint-laden bills.

28 comments on “Could a Golden Halo Winner Go Green?”