Today, in the only Saturday match-up of Lent Madness, it's the Slavic Smackdown® as Cyril takes on Methodius. While much of the world is preparing for Valentine's Day (named for a confusing muddle of murky, martyred saints in ancient Rome), the church actually celebrates Cyril and Methodius on February 14, not Saint(s) Valentinus. So go ahead and cast your vote and then show your devotion to your "Valentine" by writing a love poem in Cyrillic or serving up a big bowl of borscht.

Yesterday, Absalom Jones defeated Matthias 82% to 18% (in other words, by A LOT--get it?) in the first genuine blowout of Lent Madness 2016. He'll go on to face the winner of Christina Rossetti vs. Joseph in the next round. Really, it's bad luck for Matthias. He certainly drew the short straw in the match-up calendar.

Tomorrow, enjoy Sunday (we highly encourage church attendance) and then be ready to go bright and early on Monday morning as Lent Madness returns with what should prove to be a hotly contested battle between Julian of Norwich and William Wilberforce.

Cyril was born in Thessalonica (located in today’s Macedonia) around 827. Educated in Constantinople, he studied theology, Hebrew, and Arabic and became a priest. He was sent on two missions to the Middle East. Cyril’s most influential mission took him and his brother Methodius to the Slavs of Great Moravia (now the Czech Republic and Slovakia). Although missionaries from Rome had already evangelized Moravia, Prince Rastislav wanted to place his state firmly under the influence of the church in Constantinople.

To translate the Bible and the liturgy into the local language, Cyril and Methodius used a number of mostly Greek characters to create the Glagolitic alphabet. This was the first Slavic alphabet and is closely related to the more recent Cyrillic alphabet—named after Cyril. Using their new alphabet, Cyril and Methodius translated the Bible, the Slavic Civil Code, and possibly a Slavic liturgy. Cyril and Methodius were successful in converting many Slavs to Christianity and establishing the use of their alphabet; because of jurisdictional issues, they could not establish the Slavic liturgy without the pope’s approval.

Cyril and his brother traveled to Rome, where they were well received, in part because they brought with them some of Saint Clement’s relics. Pope Adrian II authorized the new Slavic liturgy, and Slavic priests were ordained and allowed to celebrate the liturgy in their native language. Cyril became a monk and died shortly afterward, in 869.

Along with his brother Methodius, Cyril is known as one of the two apostles to the Slavs. Celebrations in memory of these brothers are held across Eastern Europe every year.

Quietly, and without any fanfare, Methodius helped shape Europe and Asia in ways that have often gone largely unnoticed by Western Christianity.

Methodius (Michael) was born to a Christian family in the city of Thessalonica in the early ninth century. Methodius was the eldest of seven brothers, and he either learned the Slavic language from Slav migrants in Macedonia, or possibly from his mother (who may have been a Slav).

After a brief career in the public sphere, Methodius entered a monastery at Mount Olympus (present day Uludağ). Eventually his youngest brother Constantine (later taking the name Cyril) joined Methodius at the monastery. From the monastery, the brothers set out on a series of missionary journeys.

They shared a passion to share the good news in the native language of the people to whom they were ministering, not relying solely on Hebrew, Greek, and Latin translations of the Bible. And so they set about translating portions of scripture into Slavic and to create a Slavic liturgy. To do this, they invented an alphabet unique to the Slavic tongue. The later evolution of this script is known as the Cyrillic Alphabet and is still widely used across Eastern Europe. 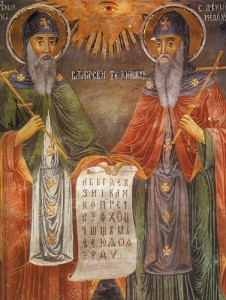 While traveling and sharing the gospel, Methodius and Cyril created a code of law that is still in use to this day. The brothers also discovered the remains of Pope Clement I. They returned the earthly remains of Clement to Rome, where Methodius was ordained a priest by Pope Adrian II. Following the death of Cyril in Rome, Methodius continued the work of carrying the gospel to the Slavs.

Collect for Cyril and Methodius
Almighty and everlasting God, by the power of the Holy Spirit you moved your servant Cyril and his brother Methodius to bring the light of the Gospel to a hostile and divided people: Overcome all bitterness and strife among us by the love of Christ, and make us one united family under the banner of the Prince of Peace; who lives and reigns with you and the Holy Spirit, one God, now and forever. Amen.

405 comments on “Cyril vs. Methodius”