In the last battle of a madcap week of Lent Madness, it's two spiritual giants facing off in the first round. Not fair to pit Dietrich Bonhoeffer against Athanasius so early in the Madness? Perhaps. But remember...life, like Lent Madness, is not fair.

Yesterday, Albert Schweitzer soundly defeated Lawrence 60% to 40% to advance to the Saintly Sixteen against Methodius.

As we will soon enter another 48 hours without voting, please remember these 10 tips to surviving Lent Madness Withdrawal. We know it's not easy and that LMW is real. But it all returns on Monday morning as Vida Dutton Scudder takes on F.D. Maurice. The first round concludes next Wednesday then it's on to the Saintly Sixteen starting Thursday. Hang on to your Lenten-themed-purple-bramble-infused hats! 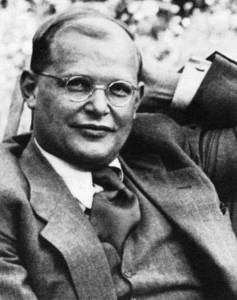 Dietrich Bonhoeffer was born in 1906 and was raised in a home that valued education. He earned a doctorate in theology in 1927 from the University of Berlin at the age of twenty-one. Bonhoeffer also studied at Union Theological Seminary in New York City from 1930 to1931. While in New York, he began attending the Abyssinian Baptist Church in Harlem, where he enjoyed both sound theological doctrine and rich examples of Christian life lived for the sake of the world. As the Nazi party was gaining notoriety and power in Germany, many of Bonhoeffer’s friends urged him to stay in the United States rather than return to Germany, but he opted to go home.

Upon his return to Germany, Bonhoeffer accepted a position as lecturer in systematic theology at the University of Berlin. He also began teaching confirmation classes for adolescent males in a Berlin slum. When Adolf Hitler came to power in 1933, Bonhoeffer became a leading spokesman for the center of Protestant resistance to the Nazis, the Confessing Church. He spoke out not just about Hitler’s dictatorship but also against his program of genocide and the Jewish Holocaust. Bonhoeffer helped organize the underground seminary of the Confessing Church.

In 1939, Bonhoeffer’s brother-in-law introduced him to a group planning to overthrow Hitler. Because of this affiliation, in April, 1943, just after becoming engaged to be married, Bonhoeffer was arrested and taken to prison. Later he was moved to a concentration camp at Flossenbürg. On April 9, 1945, just days before the American army would liberate Flossenbürg, Dietrich Bonhoeffer was hanged at the age of thirty-nine.

Pastor, theologian, poet, and courageous truth-teller: Bonhoeffer’s passion for living his faith fueled his political stance and cost him his life. Through his prolific writings, he continues to serve as a prophetic and inspiring voice for the Church.

Collect for Dietrich Bohoeffer
Gracious God, in every age you have sent men and women who have given their lives in witness to your love and truth. Inspire us with the memory of Dietrich Bonhoeffer, whose faithfulness led to the way of the cross, and give us courage to bear full witness with our lives to your Son’s victory over sin and death, for he lives and reigns with you and the Holy Spirit, one God, now and forever. Amen. 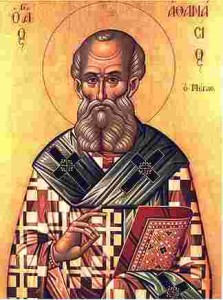 Athanasius was Bishop of Alexandria in the late third and early fourth centuries. He is remembered as a fierce defender of Christian orthodoxy, most especially in campaigning against the nontrinitarian Arian heresy that was widespread in Egypt during his episcopate.

Athanasius attended the Council of Nicaea in 325 as the secretary to his bishop, Alexander. One of Alexander’s priests, Arius, had begun spreading doctrinal views different from his bishop. After debate, the council promulgated a creed, which proclaimed that Jesus was coeternal with God the Father and begotten, not made, from the same substance. Shortly after the close of the council, Alexander died, and Athanasius was chosen as Bishop of Alexandria, despite the opposition of heretical factions in Alexandria.

Athanasius faced the brunt of the reprisals from the factions that had opposed his defense of Nicene Christianity, and he was deposed as bishop and exiled five times during his seventeen-year episcopate. During his exile he went as far afield as Trier in present-day Germany, to Rome, out into the Egyptian desert, and to his father’s tomb. He ran afoul of four Roman emperors in his defense of Christian orthodoxy. For his persistent witness and stubbornness in defense of orthodoxy, Athanasius acquired the moniker Athanasius Contra Mundum–Athanasius against the world.

In his most famous work, De Incarnatione, Athanasius argues how God the Word, by the incarnation, inspires, restores, and perfects the image of humanity out of a desire that all people should be in union with God the Father. What may seem to many like a mere point of doctrine was, for Athanasius, at the core of the gospel itself: that God desires the reconciliation of all humanity unto himself, and that reconciliation is made possible through the incarnation, in the person of Jesus Christ.

For his passionate defense of Christian orthodoxy, and the life-giving nature of his writings and proclamation of the gospel, Athanasius is remembered around the Christian world.

Collect for Athanasius
Uphold your Church, O God of truth, as you upheld your servant Athanasius, to maintain and proclaim boldly the catholic faith against all opposition, trusting solely in the grace of your eternal Word, who took upon himself our humanity that we might share his divinity; who lives and reigns with you and the Holy Spirit, one God, now and forever. Amen.

207 comments on “Dietrich Bonhoeffer vs. Athanasius”