Welcome to Day Two of Lent Madness 2016. If this is your first year playing along, congratulations! You are no longer a first-time voter. You have successfully navigated the rigors of clicking an online button. Of course, the voting is just a part of what happens during Lent Madness. The reading, the learning, the inspiration, the community that forms — both online and in person — are all part of the larger process.

In fact, you may be amazed at the number of comments. Nearly 300 yesterday! This is a big part of the full Lent Madness experience. People love to hear your thoughts about why you voted a particular way — from the profound to the frivolous. So you’re always encouraged to share and/or read the comments. Gracious online commenting? Here at Lent Madness it’s not an oxymoron!

Speaking of yesterday, Helena mowed down Monnica 62% to 38% in record voting, with nearly 9,000 votes cast. For you Lent Madness historians, that beats the previous single day record — last year’s Golden Halo round when Francis and Brigid combined for 8,257 votes. Helena will go on to face the winner of Constance vs. Dominic in the Round of the Saintly Sixteen. And speaking of future battles, if you’re curious about when your favorite saint will be up, check out the recently uploaded 2016 Matchup Calendar (deftly created by Bracket Czar Adam Thomas).

Oh, and we also reached a Facebook milestone as we crossed the 15,000 “like” mark on the Lent Madness Facebook page. If you haven’t liked it yet, help us get to our next goal: 100,000!

But today it’s a Biblical saint taking on a saintly soul who lived 1,800 years later. Matthias vs. Absalom Jones. Such is the Madness of our little online devotion… 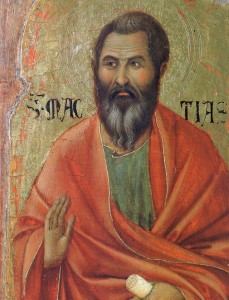 What do you do when you need a new apostle?

Jesus chose the original twelve, but with the betrayal of Judas and Jesus’ Resurrection and Ascension, the eleven remaining disciples were faced with choosing a twelfth. Twelve is a Biblical number of completeness. The disciples, preparing for the next part of their journey, needed to be complete. For the successor to Judas, they cast lots—the practice of pulling a marked stone or stick out of a group. The lot fell on Matthias, and he was added to the apostles. After his election, we hear nothing more about Matthias in the New Testament.

Information about Matthias from other sources states he was born in Bethlehem and studied under Simeon (of Song of Simeon fame). He and Andrew traveled together to spread the gospel into Ethiopia. Matthias is said to have encountered several groups on his journeys that attempted to kill him in various ways. One account has him being forced to drink poison. Matthias complied; not only did he remain unharmed but also the other Christians with him who had been forced to drink the poison were miraculously healed. Another account recalls his flight from angry pagans bent on killing him; eventually he becomes invisible and escapes. When Matthias is again fleeing from agitated pagans, the earth opens and swallows them, allowing Matthias to go about his missionary work.

Church fathers Origen and Clement of Alexandria mention a Gospel of Matthias, which is lost to us. The fragment we have reminds us to increase the growth of our soul by faith and knowledge—a fitting reminder for a man who is barely known to us but whose faith encourages us through the ages. 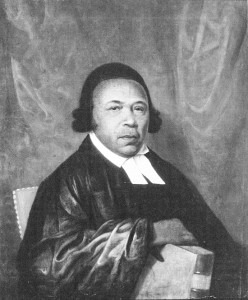 Absalom Jones was the first African American priest in The Episcopal Church. At age sixteen, Absalom was sold to a man who took him to Philadelphia. There, Jones attended a night school run by Quakers. In 1777 he purchased his wife’s freedom with his earnings; in 1784 he purchased his own.

Jones became a lay minister at St. George’s Methodist Church. Alarmed by the increasing number of the church’s black parishioners, the vestry decided to segregate blacks into an upstairs gallery, without notifying them. When the ushers tried to carry out this order, Jones, his friend, Richard Allen, and all the other black members walked out.

Along with Allen, Jones founded the Free African Society, a support organization for freed slaves. Members paid dues to help the needy and established communication with similar groups in other cities. The society also built a parish, which petitioned to become part of The Episcopal Church while retaining black leadership. In 1794 that congregation became the African Episcopal Church of St. Thomas, the first black church in Philadelphia. During its first year, with Jones as its lay reader, St. Thomas Church amassed over five hundred members. In 1795 Jones was ordained a deacon, and in 1804 he became a priest.

Famous for his oratory, Jones helped establish a tradition of delivering antislavery sermons on New Year’s Day. In 1797, he joined other blacks in petitioning the US Congress to overturn the 1793 Fugitive Slave Act—a law that facilitated the practice of kidnapping free blacks and selling them into slavery. During the 1790s, when yellow fever repeatedly struck Philadelphia, many doctors fled the city. Jones and a corps of black Philadelphians helped nurse the sick and bury the dead. Jones, in particular, sometimes worked through the night.

Jones died February 13, 1818 in Philadelphia. In 1996 his remains were reinterred in a chapel of his church, St. Thomas.

Collect for Absalom Jones
Set us free, heavenly Father, from every bond of prejudice and fear; that, honoring the steadfast courage of your servant Absalom Jones, we may show forth in our lives the reconciling love and true freedom of the children of God, which you have given us in your Son our Savior Jesus Christ; who lives and reigns with you and the Holy Spirit, one God, now and forever. Amen.

273 Comments to "Matthias vs. Absalom Jones"