Another day, another mystic, as the great thinker Meister (please don't call me 'Mister') Eckhart faces off against Drogo, 12th century saintly soul and patron saint of coffee. WARNING: Don't even try to make your choice without first drinking a hot, steaming cup of coffee -- as long as this action will in no way ultimately influence your vote.

Yesterday in a tight, emotionally-charged contest, amid heavy voting, Julian of Norwich prevailed over William Wilberforce 52% to 48%. Julian will face the winner of Roch vs. Gertrude in the next round.

The SEC also released their weekly Monday Madness video in which a contest(!) was announced. Watch now to learn how you can own the cardboard cutout of 2015 Golden Halo winner, Francis Assisi (as seen at the Episcopal Church's 2015 General Convention).

And finally, if you need to add some extra Lent Madness commentary to your day, tune in to Priest Pulse's recent interview with one half of the Supreme Executive Committee (Tim). We suggest listening to it while on the treadmill, for that extra motivation, or during your commute, to make it speed seamlessly by. 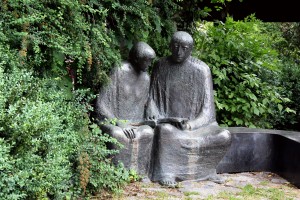 Eckhart von Hochheim, commonly known as Meister Eckhart, is one of the greatest mystics of the Christian tradition. After his initial schooling, he alternated between the universities at Cologne and Paris, first as a student and later as a professor. Born in Germany around 1260, Meister Eckhart joined the Dominican Order of Preachers as a young man. He returned to Strasbourg in 1314, but his popularity soon began to draw the wrong kind of attention.

Encouraged by the Archbishop of Cologne, the head of the Dominican Order in the German region investigated the soundness of Eckhart’s doctrine and cleared him of heresy. Unsatisfied with these findings, the archbishop ordered a more formal and comprehensive review. In February, 1327, despite Eckhart’s public declarations of innocence, he was called before the Inquisitors, who declared him a heretic.

Eckhart appealed his conviction to the Holy See. Accompanied by his Dominican superiors, Eckhart traveled to Avignon and submitted himself to
the judgment of Pope John XXII. Following the usual procedure, the appointed examiners did not receive complete texts of the writings to be judged, only suspicious lines taken out of context. On March 27, 1329, the papal commission upheld the conviction from Cologne, but by that time Eckhart had died, insisting to the end that he was faithful to the teachings of the Church.

Eckhart was a subtle and creative thinker. His Latin commentaries, produced for advanced Dominican students, demonstrate his mastery of the technical categories of the Scholastic philosophy. His German sermons were engaging and poetic, filled with puns and wordplay, drawing heavily on the vocabulary of courtly love, adapting it to speak of the birth of the Word in the soul.

After centuries of neglect, Meister Eckhart’s teachings experienced a revival at the end of the nineteenth century. Similarities between his thought and the mystical traditions of Asia have made him a fruitful resource for modern interreligious dialogue.

Collect for Meister Eckhart
O God, create in us hearts reconstructed by your simple goodness. Thank you for the life of your servant Meister Eckhart, who, for the love of you, put his life and honor at the feet of power to speak plainly of your abundance. Grant that we too might be awed by your marvelous depth of creativity and mystery, for Jesus’ sake. Amen. 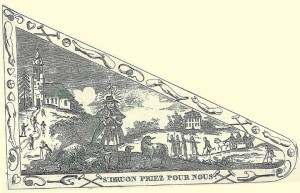 Near the beginning of the twelfth century, Drogo was born into a family of Flemish nobility—but his path began to change immediately. Drogo’s father died prior to his birth, and his mother died because of complications in childbirth. The newborn orphan was given over to the care of family members. When he was ten-years-old, Drogo, a sensitive child, was devastated to learn the cause of his mother’s death and held himself personally responsible for it.

Reaching adulthood, Drogo renounced the wealth and ease that was his birthright and became a shepherd in the Flemish countryside. During his time in the pastures, Drogo developed a reputation for holy living and for the spiritual gift of bilocation. Tradition holds that Drogo would be observed in
the fields praying while watching his flocks and simultaneously attending worship in the village.

After a time, perhaps still seeking to assuage the guilt he felt for his mother’s untimely death, Drogo felt called to head out on pilgrimage. Drogo traveled to Rome in order to encounter the holy places and relics there. Over the course of nine years, he traveled to Rome and back nine times.

These pilgrimages came to an end when Drogo was afflicted by an unknown malady, which caused him disfigurement and estrangement from his community. In order to protect the residents of the village where he lived from his appearance, Drogo took up a hermit’s life. He took up residence in a cell adjacent to the local parish church and lived there for the rest of his life. Stories say that when a fire engulfed his cell, Drogo refused to leave and was discovered praying among the ashes.

Lately discovered by popular culture, Drogo of Sebourg is the subject of countless listicles, thanks to his identification as the patron saint of coffeehouses and baristas. Drogo died on April 16, 1186, and was buried in the parish church in which he had spent the majority of his life. For obvious reasons, Drogo is the patron of unattractive and repulsive people. It is less clear why he has long been associated with coffee—so we will pour another cup and ponder this connection.

Collect for Drogo
God of unsearchable wisdom, you hear us praying even among the ashes of our lives. Thank you for the example of your servant Drogo, who lived a life of deep prayer despite profound suffering, who walked holy roads and prayed for worldly souls. Grant us the grace to seek your face in all things and in all places. We ask this for the love of your son, Jesus. Amen.

288 comments on “Meister Eckhart vs. Drogo”