After a rollicking, Celebrity Blogger Week, it's time to highlight the Supreme Executive Committee. Just who are these masked (in the appropriate 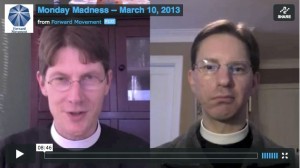 In real life, the one word they would use to describe one another is "archnemesis." Fortunately, for the season of Lent they engage in a 40 day and 40 night period of detente in order to pull off the world's most popular online Lenten devotion. The moment the Easter Acclamation is announced at the Great Vigil on Easter Eve, the world returns to normal and their rivalry is revived.

Besides simply being supreme, what exactly is the role of the SEC? Well, that's a mystery that will never fully be revealed. But Tim spends much of his time corralling Celebrity Bloggers into meeting deadlines, writing introductions to posts, and  managing the Lent Madness social media presence. Scott manages the Lentorium and helps bring to bear Forward Movement's resources in terms of graphic design, publishing, and technology. He also heads the Voter Fraud Department (one vote!). Both Tim and Scott film award-winning Monday Madness episodes throughout Lent to keep the faithful informed and up-to-date on all things Lent Madness; determine the yearly bracket; and publicize Lent Madness by any means necessary.

Scroll down for some never-seen-before SEC Fun Facts! 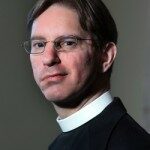 The Rev. Tim Schenck is rector of the Episcopal Parish of St. John the Evangelist in Hingham, Massachusetts, on the South Shore of Boston. He is the author of four books full of humor and faith including the recently released Father Tim’s Church Survival Guide (Morehouse 2015) and Dust Bunnies in the Basket: Finding God in Lent & Easter (Forward Movement 2015). Tim writes a monthly syndicated column for Gatehouse Media titled “In Good Faith.” When he’s not tending to his parish, drinking coffee, or blogging at Clergy Confidential, he’s likely hanging out with his family that includes his wife Bryna, two sons Benedict (16) and Zachary (14), his dog Delilah, and a ferret named Mimi. Friend him on Facebook or follow him on Twitter @FatherTim. 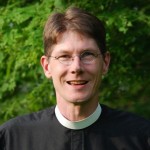 The Rev. Scott Gunn is an Episcopal priest and self-confessed technophile. He serves as the executive director of Forward Movement in Cincinnati, Ohio, whose mission is to inspire disciples and empower evangelists. Though Scott is happily married and the proud owner of a dog named George, he will never, ever have ferrets at home. His blog is Seven whole days, and he is the co-author of Faithful Questions, an introduction to the Christian faith. You can find him on Facebook, Twitter, flickr, LinkedIn, or Instagram.