Today we meet two 19th century contemporaries who lived in very different worlds -- the United States and Denmark, to be literal about it. Sojourner Truth -- slave, abolitionist, radical vs. Søren Kierkegaard -- philosopher, theologian, writer. Two complex, passionate individuals who influenced and inspired many throughout their lives and beyond.

Yesterday Clare of Assisi easily advanced past Denis 74% to 26% to secure a place in the Saintly Sixteen against the winner of Vita Scudder and F.D. Maurice. Despite all the head jokes and puns in the comment section throughout this contest, you will note that the SEC has shown great restraint in not using one to describe this battle. This is because we like to stay well ahead of the humor curve.

So in the meantime, have a tete a tete with your friends and neighbors as you consider Sojourner or Søren. 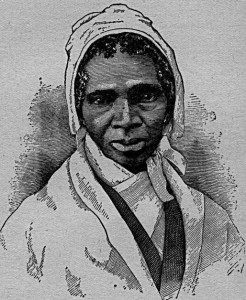 Sojourner Truth was born Isabella “Belle” Baumfree in Ulster County, New York, to James and Betsy Baumfree around 1797. Colonel Hardenbough sold Belle away from her parents for $100. She was sold four more times before 1815.

Around 1815, she married and over the course of several years, gave birth to five children. Her owner, John Dumont, promised Belle her freedom. However, he later went back on the agreement, citing that Belle had cost him additional money owing to an injury she had sustained. In 1826 Belle left the Dumont property with her youngest daughter, having been convinced by a vision of Jesus that it was time to seek freedom.

She sought refuge in New York City until New York’s slave emancipation was complete and she could be reunited with her children. She discovered that her five-year-old son had been illegally sold to a planter in Alabama by Dumont. She filed a lawsuit to petition the courts for the return of her son, and she won. This marked the first time a black woman won a civil court case in US Federal Court.

In 1843 Belle had a profound religious experience and changed her name to Sojourner Truth, dedicating her life to the abolition of slavery. She began dictating her memoirs (published in 1850 to wide acclaim) and launched a speaking tour of the United States. In May 1851, in Akron, Ohio, she gave the speech that came to be known as “Ain’t I a Woman?” Even within the abolitionist community, Truth was a radical. She pushed for equal rights for women, especially black women, alongside the total eradication and abolition of slavery. She recruited black soldiers for the Union army during the Civil War, and after the war ended, she moved to Washington, DC, to counsel former slaves.

Truth tried to end streetcar segregation by sitting in the whites-only section in 1865. She petitioned Congress for slavery reparations and land grants for freed slaves, who had been freed only to face destitution. Until her death in 1883 in Michigan, she worked to abolish the death penalty, achieve prison reform, and establish equal rights for all Americans.

Collect for Sojourner Truth
O God, whose Spirit guides us into all truth and makes us free: Strengthen and sustain us as you did your servant Sojourner. Give us vision and courage to stand against oppression and injustice and all that works against the glorious liberty to which you call all your children; through Jesus Christ our Savior, who lives and reigns with you and the Holy Spirit, one God, for ever and ever. Amen. 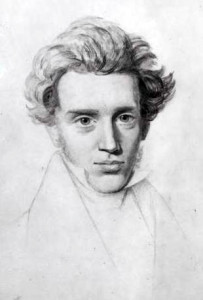 Søren Kierkegaard, born in 1813, was raised in an affluent family with Lutheran roots (his uncle Peter was a bishop in the Danish Lutheran Church). A man of contradictions, Kierkegaard received a classical education from the University of Copenhagen even while expressing his desire to live a life more of action than of speculation.

Throughout his life, Kierkegaard had an antagonistic relationship with the Church. In contrast to many philosophers and theologians of his time, he believed that it was impossible to prove faith, that faith (like love) could not be reasoned out but requires a “leap” of faith. Such faith (and its accompanying doubts) was important to Kierkegaard’s life.

At the same time, Kierkegaard regarded the Church (in particular, the state church) as a place where the words of faith were spoken without the actions of love. The state church had intractably intermingled the politics and influence of the world with the inner life of faith.

As a young man, Kierkegaard would walk the streets of Copenhagen. This experience inspired one of Kiergegaard’s famous quotes: “If there were no other, there was definitely one man in Copenhagen whom every poor person could freely accost and converse with on the street; that, if there were no other, there was one man who, whatever the society he most commonly frequented, did not shun contact with the poor, but greeted every maidservant he was acquainted with, every manservant, every common laborer.”

A man with a deep inner life and a profound sense of melancholy, Kierkegaard calls us to the joy of love active in the world. Rather than contemplating the world as we might like it to be, the work and life of Kierkegaard call us out to walk the streets and experience the world as it is—in all of its trouble, sadness, and joy. He died in 1855 in Copenhagen.

Collect for Søren Kierkegaard
Heavenly Father, whose beloved Son Jesus Christ felt sorrow and dread in the Garden of Gethsemane: Help us to remember that though we walk through the valley of the shadow, you are always with us, that with your philosopher Søren Kierkegaard, we may believe what we have not seen and trust where we cannot test, and so come at length to the eternal joy which you have prepared for those who love you. Amen.