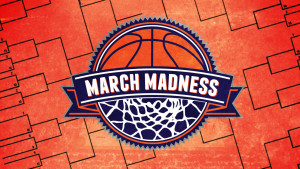 Apparently there's some other bracket-style tournament that takes place this month. Who knew? And while the Lent Madness Legal Team considers its options, we thought we'd do a quick bracket analysis of the teams in this year's NCAA basketball tournament.

Where are the saints? Have they ever appeared in Lent Madness? Do people get upset when mystical teams take on modern teams? The Supreme Executive Committee of Lent Madness dives into the fray.

Obviously OUR bracket is holier than THEIR bracket. But nonetheless, if you look hard enough, there are some parallels.

St. Joseph University (Hawks) -- Will the Hawks do better than St. Joseph did in Lent Madness 2016? As you will recall, our St. Joseph lost to Abasalom Jones in the Saintly Sixteen after defeating Christina Rossetti in the first round.

Gonzaga University (Bulldogs) -- Once the ultimate Cinderella and now a perennial basketball power, the "Zags" are named for St. Aloysius Gonzaga, a 16th century Italian Jesuit.

University of Notre Dame (Fighting Irish) — Any team named for "Our Lady" is obvious. Too bad there are no “Hail Mary” plays in basketball. The word “Fighting” is lamentable but Irish saints (Columba this year and Brigid of Kildare last year) often do very well in Lent Madness so it balances out.

Iona College (Gaels) -- This New Rochelle, New York, school has a direct connection to Lent Madness 2016! It was named for the isle of Iona, on which St. Columba founded his famous abbey. 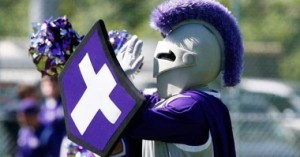 Providence College (Friars) -- A college named for heaven, their nickname gets points for invoking Friar Tuck. Note: Don't ever call a "friar" a "monk" -- they get offended.

College of the Holy Cross (Crusaders) -- This school in Worcester, Massachusetts, is named for the cross! Too bad they lose some street cred by calling their sports teams the "Crusaders" -- not exactly the image we need these days.

Temple University (Owls) -- Who wouldn't give a hoot for a school named after the Temple? The only question is whether it will be destroyed or restored in the month ahead.

University of Virginia (Cavaliers) -- You might think the state of Virginia is named for the Virgin Mary. But you'd be wrong. It was named for Queen Elizabeth I, the "Virgin Queen." At least Anglicans can cheer on the Elizabethan Settlement.

University of West Virginia (Mountaineers) -- See above. And then remember how much time Jesus spent on mountaintops -- praying by himself, Sermon on the Mount, Transfiguration, etc.

Hampton University (Pirates) -- This historically black college in Hampton, Virginia, was founded by black and white leaders of the American Missionary Society in 1868 to provide education to freedmen. Rumor has it that Absalom Jones has his money on the Pirates this year.

Virginia Commonwealth (Rams) — At first glance, the VCU mascot would be more at home in Los Angeles where the NFL team of the same name is returning this year. HOWEVER the team is named for the animal caught in the thicket after God tells Abraham to stop the presses and not sacrifice his son Isaac after all.

University of Maryland (Terps) — Like the state of Virginia, Maryland is not actually named for the Virgin Mary. Rather for King Charles I of

Duke University (Blue Devils) — It doesn’t matter how many games or titles Coach K has won. Your team, no matter how you spin it, is named after (a blue-tinted plural version of) satan.

If your Lent Madness bracket has been hopelessly busted, you may well decide to fill out that “other” bracket. Go ahead. And if you enter an office pool, we definitely suggest you use this analysis to decide all your picks. Just make sure to tithe your winnings to the Supreme Executive Committee.