Everyone knows that purple is made by combining red and blue. So as far as we're concerned, whether you're in a red state or a blue state, you've got to be filled with Purple Fever. Like everyone else, we've been watching the Republican party's convention this week, and we've learned a few lessons. Don't worry, we'll be watching the Democrats too, and we'll be sharing what we learn from them. 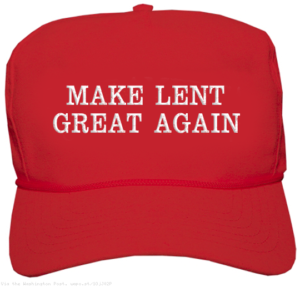 If nothing else, The Donald has mad showman skillz that even two publicity hounds like the Supreme Executive Committee can respect. So we watched and learned. Here's how we think we can make Lent great again.

1. Fasting?! Forget it. Real Christians feast. All. The. Time.
2. Confession. Let's face it. It's no fun to confess privately. If you're going to describe your sins, get a reality show and do it on the air.
3. Gambling. Forget that Wednesday evening book group. You can do better. You might not be able to set up a Lent Casino at your church, but you can at least do bingo instead of books.
4. Sermons. Tell your priest to stop working so hard on carefully nuanced essays. Sermons need to be filled with an endless succession of bumper-sticker sayings that may or may not tie together. An example. "Jesus went into the wilderness. It was the greatest wilderness. It had angels. They gave him bread. It was Wonder Bread, because that is the most American kind of bread. Jesus was the greatest. Make Lent great again."
5. Sermons II. Actually, now that we think about it. Why work on sermons at all? Tell your priest to figure out what the Obama's minister has been preaching and just copy that.
6. Repentance. Don't do it. If you repent, you're admitting you made a mistake. Mistakes are for the weak.
7. Ash Wednesday? Boring. Bling Wednesday is much better.
8. Austerity. Never. Make your church look like Versailles. The more gold, the better.
9. Prayer. Refer to anyone who disagrees with you as "the enemy."
10. Music. Fie on "40 Days and 40 Nights." Too depressing. Go upbeat! We suggest "We are the Champions (of Lent)."

Look for us to emerge from behind a cloud of incense in a mere 223 days!

P.S. If you think we shouldn't be joking about politics, here's the deal. We poke fun at ourselves and the church, because we want people to take themselves less seriously and to take Jesus more seriously. Likewise, we're having some fun at the Republicans' expense, and soon enough the Democrats', as a way of inviting engagement and thought with the political process. Plus sometimes you either have to laugh or cry. Remember Lent Madness is optional.